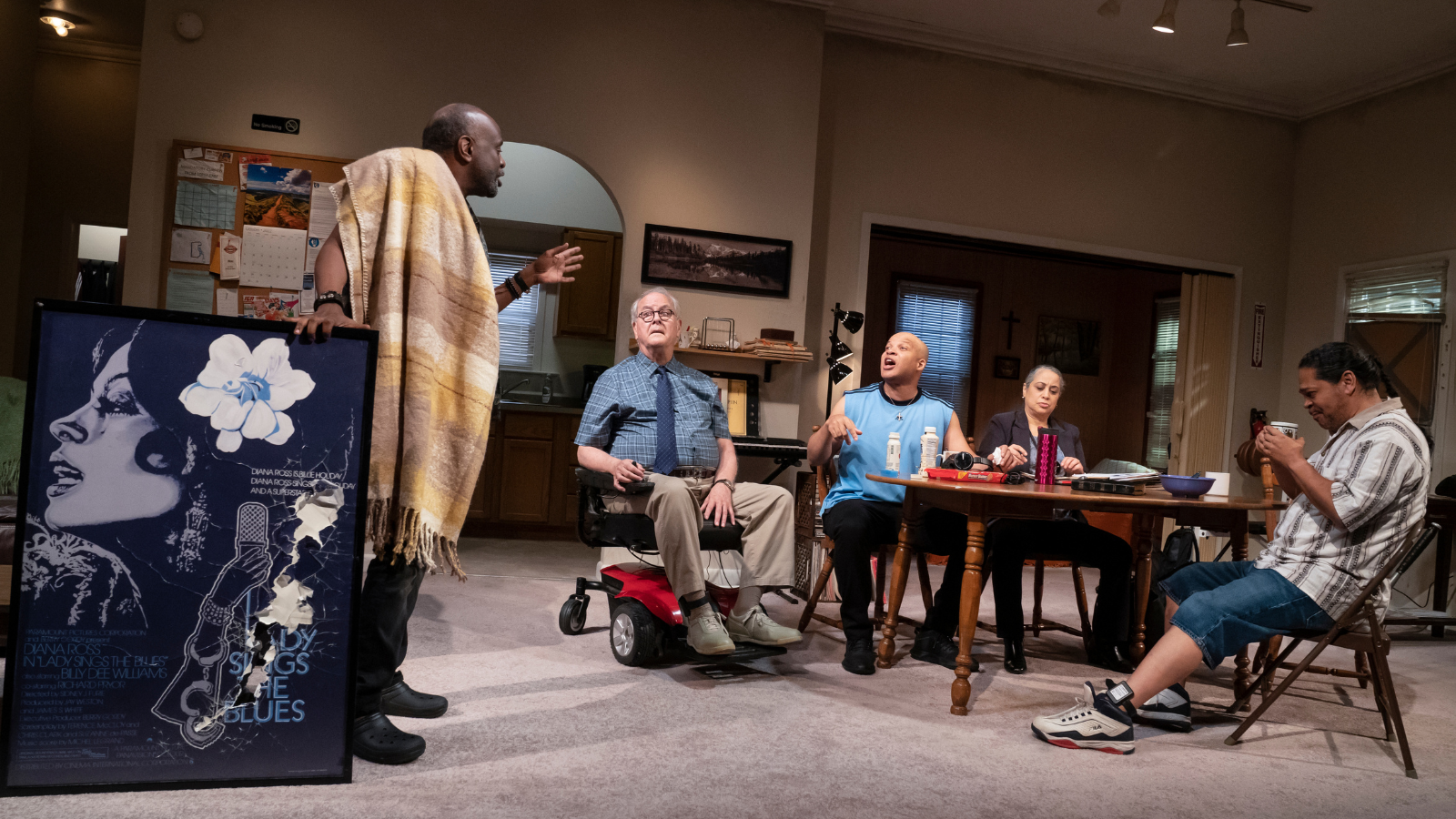 There are no easy answers, or even easy questions, in Bruce Norris’ Downstate, which just had its New York premiere at Playwrights Horizons. Though it deals with matters of shame and guilt, of forgiveness and repentance, of child abusers and their victims, there are no simple dialectics. A play which tries to place those themes on a balance of right and wrong would be compelling enough, but Norris’ refusal to simplify creates a gripping look at a sad state of affairs that is as dry-eyed as it is tough-stomached.

280 miles south of Chicago, four men convicted of sex crimes against minors live in a group home whose walls become rapidly claustrophobic, as new restrictions crack down on the perimeter they can travel outside the house without their ankle monitors going off. “That hardly seems fair, does it?” asks Fred (Francis Guinan), who we meet in the middle of a visit from Andy (Tim Hopper), one of his victims looking for closure thirty years after their trial.

We know where Andy, and his wife Em (Sally Murphy, nicely finding the middle ground between lioness and yogi Karen), stand on the issue. But Norris masterfully and fluently complicates it for us as we meet the rest of the house. Felix (a frightening Eddie Torres) is sort of a shut-in, and the most egregious of the offenders, taking his meals in the makeshift chambers he’s eked out of the living room. Gio (Glenn Davis) speaks in the overly respectful manner of an annoying youth pastor, with equally questionable ambitions of leaving behind his job at Staples for a more lucrative gig.

And then there’s Dee (K. Todd Freeman), who holds court with his quick, delicious wit as he sways to his Diana Ross CDs—the men are not allowed access to smartphones or the Internet. A former dancer and choreographer (on a couple Vanessa Williams videos!), he claims never to have lived in a state of innocence, so his years-long relationship with a 14-year-old boy never registered as problematic. He’s got the worldly factoids to back it up, filling in their shared parole officer (Susanna Guzmán) on remote cultures where such behavior is encouraged.

Though Norris gives each person their own fully-realized arc—which Pam MacKinnon’s sharp, empathic direction ensures is held up as valid and lived-in—he allows Dee to rise as the play’s emotional and intellectual fulcrum. Freeman, in a monumental performance, is more than up to the challenge. His character relishes playing devil’s advocate, a stance that flexes his wit but grows in darkness as the magnitude of his pain is brought to light. The intensity of his eyes when confronted over a seeming lack of shame, opens up entire histories of sedimented pain rushing back to terrifying life.

And once Freeman lubricates that already slippery slope with his increasingly acid remarks, concepts of kindness and veracity are called into question. Is Fred’s “golly-gee” attitude, sublimely balanced by Guinan, an act, or an unfortunate attitude which, compounded with his predilection, becomes dangerous?

MacKinnon understands when to tighten the unsteady cord on which everyone walks, just as she knows how letting it slack can devolve into a precipice of cyclical trauma. Her direction achieves the tough task of not letting the incredible performances blow the roof off Todd Rosenthal’s well-appointed set, instead letting Adam Silverman’s haunting lighting trap them in their situation.

It’s tempting to call the play difficult, or uncomfortable, though those elements are very much present. But such descriptions cheapen this uncompromisingly well-crafted work of drama that withholds total catharsis even as it inches towards its edge. Freeman’s breathtaking performance, against an all-around incredible production, is what brings us back; its shadows guiding us to new, and unexpected understandings.

Downstate is in performance through December 11, 2022 at Playwrights Horizons on West 42nd Street in New York City. For tickets and more information, visit here.