An Excellent CYRANO That Fights For Words — Review 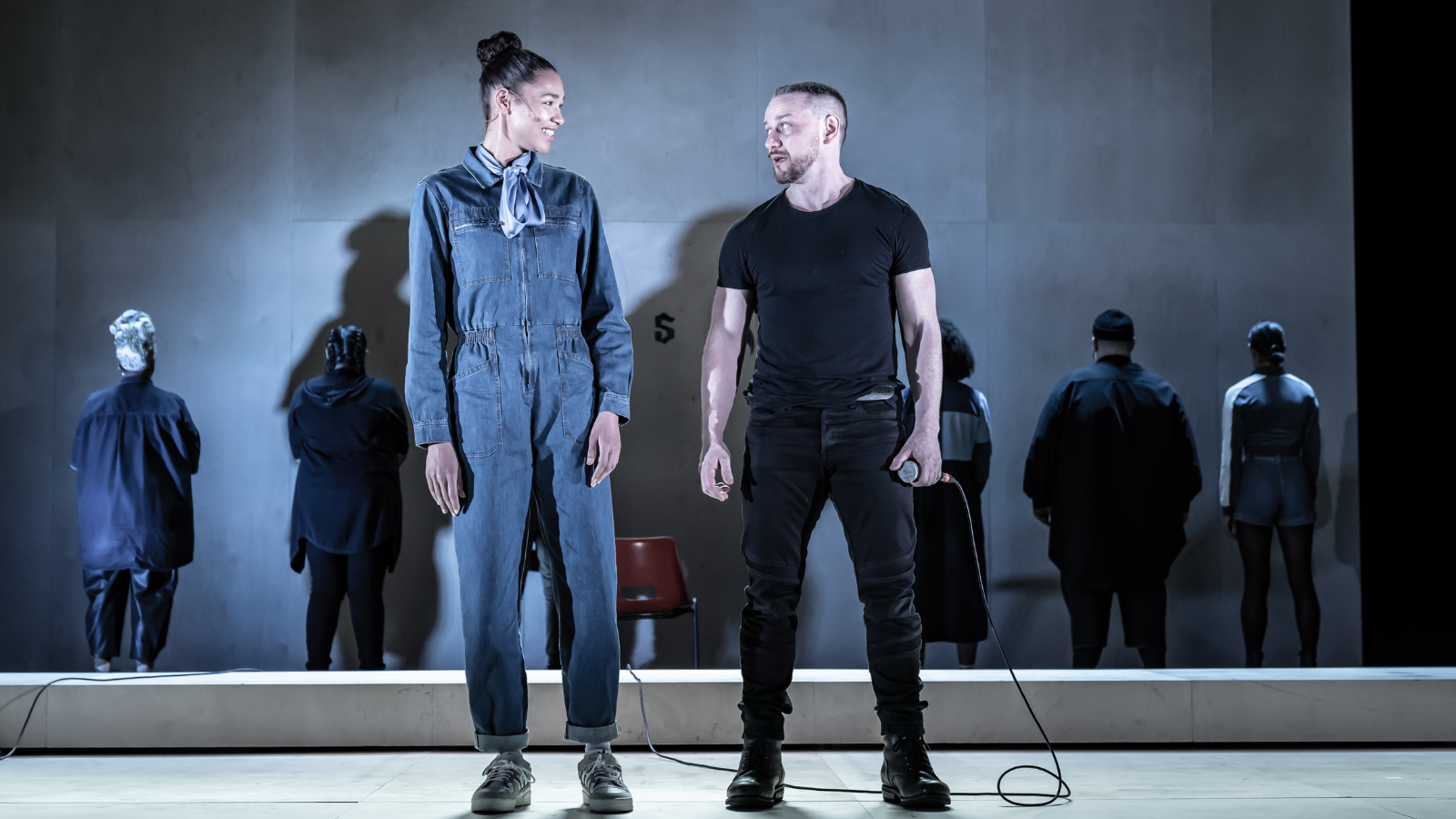 Following a disappointing recent film adaptation, which garnished its well-known plot with flowery songs and period detail, I was not expecting a production of Cyrano de Bergerac to be the sexiest, most thrilling production of the season. Starring a breathtaking James McAvoy as its lovelorn lead, this British transfer from The Jamie Lloyd Company strips the material down to the essential—the sword by which everyone in its 1640 Paris must live or die: the power of words.

The story, as with most of these tried-and-true classics (and... life), is simple to the point of verging on the ridiculous. Though a witty nobleman as confident in his dueling skills as he is in his poetic wordsmanship, Cyrano’s hideousness (not pictured) keeps him from professing his love to the beautiful Roxane (Evelyn Miller), who falls lustily for handsome new cadet, Christian (Eben Figueiredo). Seeing this as his only opportunity to engage with her on a romantic level, Cyrano begins ghostwriting the dim-witted trainee’s side of their love letters. There is, of course, a balcony scene in which a somehow-hidden Cyrano feeds Christian sweet nothings to relay, in real time, to their clueless beloved.

Rather than hiding the narrative’s absurdities, director Jamie Lloyd leans in, most ingeniously by staging that balcony scene as a game of musical chairs. As with the plot, and the children’s game, the device is clean, legible, and blazingly effective, foregrounding the stellar cast’s absolute mastery over Edmond Rostand’s book, here adapted by Martin Crimp.

Soutra Gilmour’s scenic design is equally an achievement in economical potency, somewhere between a classical Greek agora and the stunning Brutalism of London’s south bank. As with her costume designs, which also bring to mind the ease of the best UK athleisure, the production’s technical components create an ideal space for pure theatre, and the cast takes this challenge and shoots past the moon, past the stars, landing in their own galaxy of brilliance.

McAvoy’s Cyrano is compulsively watchable, with the settled-in vulnerability of his character’s loneliness a fascinating counterpart to his virtuosic ability with words, often delivered through verse, or freestyle. (Shoutout to this production, by the way, for having contemporary actors bring slam sensibilities to an older text without causing even a wink of an eyeroll). McAvoy makes his character a conduit for the feelings he expresses, often shocking himself with the profundity of his humbling love for Roxane. In a single speech, he is at turns vulnerable, confident, horny, brooding, a dom, a sub, open, hidden, tongue-tied, and eloquent. McAvoy is vividly present; a performance on fire.

Figueiredo makes Christian an annoyingly lovable himbo, someone who is ultimately worth sparing, but boy is he a tool. The actor’s easy smile is as seductive as it is infuriating: a perfect match for Cyrano’s hard-earned skills. Credit must be given to casting director Stuart Burt, who has assembled one the finest casts I have ever seen. Each member of the ensemble embodies their character, as due to extraordinary skill and remarkable dexterity with the play’s many styles of communication, as to their innate sense of being in the world.

Ligniere (Nima Taleghani, also the production’s fight captain), a scrappy gadabout who doubles as a sort-of narrator, flexes a superb flow over the play’s introductory moments, and remains a likable presence throughout. The smooth composure of his rhythmic speech contrasts one of the play’s most felt moments, which finally lands after Taleghani spends nearly ten minutes delicately drafting the maxim “I LOVE WORDS. THAT’S ALL” on a back wall.

Roxane, who can easily be played as bratty ingenue, is given full life by the charismatic  Evelyn Miller. An intelligent woman aspiring to a richer, more engaging existence than the one into which she is born, Miller’s Roxane is immediately recognizable, and lovable. When she laments that, “I’m just so bored of being loved,” it registers less as a complaint from a charmed life than a thoughtful dissent from the objectifying eyes of men like the nefarious Count de Guiche, played with delicious villainy by Tom Edden. As a result, Roxane’s friendship with the typically-male baker, Ragueneau (an assured Michele Austin) scans as almost radically fresh.

Kate Waters’ fight choreography, though sparingly deployed, is electrifying—what I imagine Jerome Robbins’ original work on West Side Story must have felt like all those years ago. In her most inspired sequence, as Cyrano, never too far from a mic, battles an enemy, someone holds the cord (later used as a jump rope) in a way that suggests, not only preventing physical violence, but ensuring his verse isn’t fatal. Of course, as delivered by McAvoy in this perfect production, it absolutely is.

Cyrano is in performance through May 22, 2022 at BAM Strong on Fulton Street in New York City. For tickets and more information, visit here.