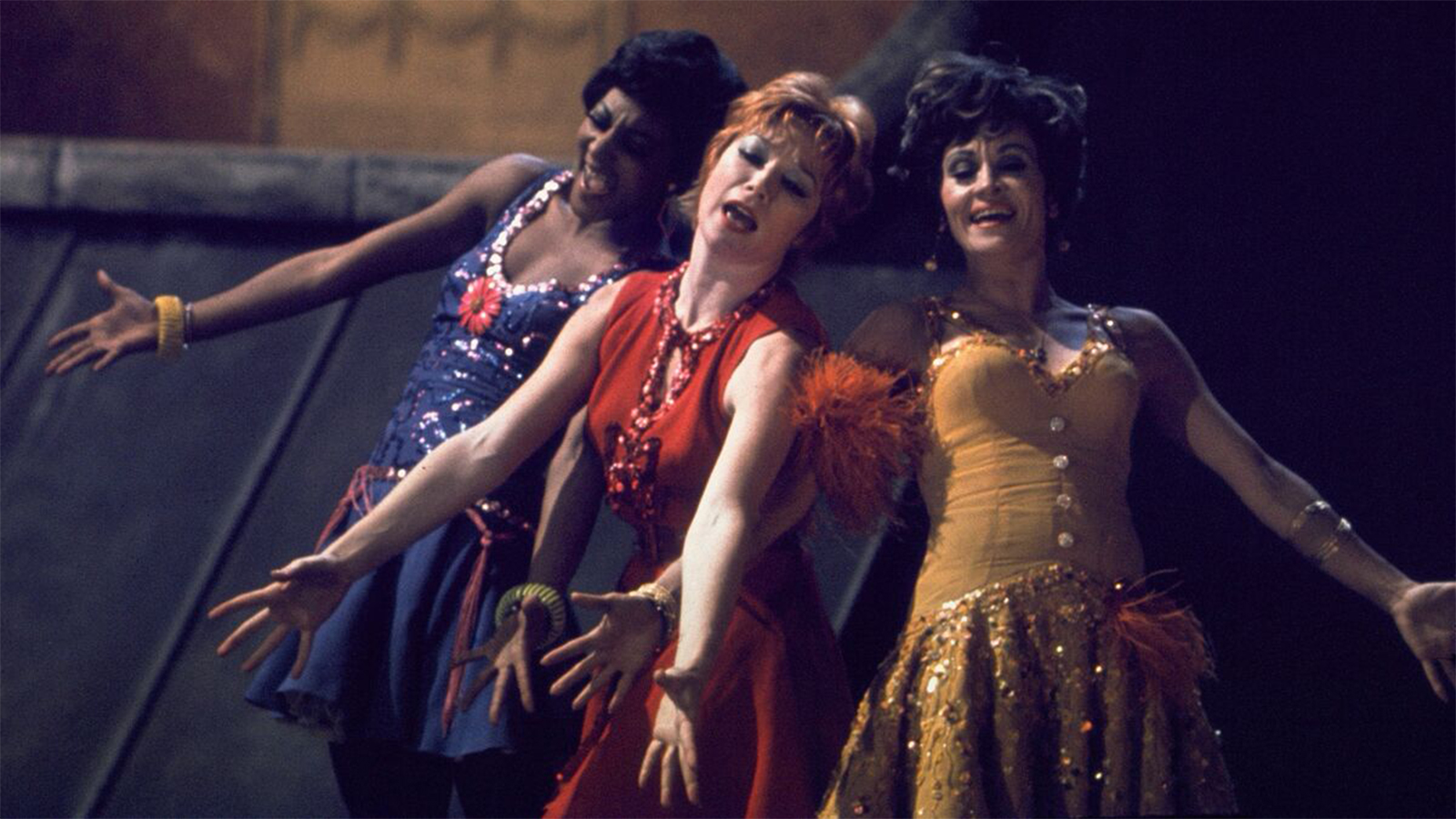 Universal Pictures, 1969
By
Juan A. Ramirez
No items found.
on
Category:
Features

Reader, I will once again be talking about Sweet Charity, and if you’re getting exhausted of thinking about a musical from 1966, imagine what living in my head is like.

That said, we should never be tired of thinking about this musical. To paraphrase MacArthur Genius Chimamanda Ngozi Adichie, “We Should All Be Sweet Charity Stans.” I think the reason not too many people think to include it in the pantheon of Great Musicals, let alone mount a large-scale production, is that it’s a vehicle for a certain kind of star we rarely see anymore. Charity is a guileless audience charmer first, dancer second, and hoe-with-a-heart-of-gold third––qualities I’m hard pressed to find in any major stage star at the moment.

(Britney Spears was reportedly asked to step into the mostly-sorry 2005 Broadway revival, and though I initially doubted the stunt casting, a conversation with a friend last night filled me with bittersweet nostalgia for what could have been. Britney practically invented ‘2000s white girl doing hip-hop,’ but could she do Fosse? “Britney’s dancing is all angles and precision––and that’s Fosse,” he assured me. That, plus her effortless charm and lovely-enough vocals would have shook theatre in ways unimaginable. But I digress…)‍

Sweet Charity just works. It does not have the typical linear structure of most musicals of the time, opting for an episodic, ‘a few days in the life’ look instead. It has its “I Want” songs, of course, but Charity’s life resists easy narration. She’s stuck in a loop of dead-end relationships with deadbeats, but remains dizzily optimistic. We meet her as one of these steals her money and pushes her into a Central Park pond, and she still has the Audacity of Hope (patent pending) for another relationship with a shy accountant. Their story meanders from 92nd Street Y classes to swingin’ free-love cults, and lacks the one-track mindedness of most romantic musicals.

But then again, this is only somewhat of a romantic musical; the film adaptation’s seldom-remembered subtitle is “The Adventures of a Girl Who Wanted to Be Loved,” not “The Girl Who Got What She Wanted.” It’s a brilliant exploration of personal narratives, and the logical endpoint of the musical theatre dictum which states that characters should sing when emotions are too high for speaking, and dance when they’re too high for singing. This is why songs will usually jump off a particularly exciting moment and wrap up with a dance break. Sweet Charity does this beautifully with almost each number.

Charity is desperate for love and becomes near-manic whenever near it. Three of her big numbers, “You Should See Yourself,” “If My Friends Could See Me Now,” and “I’m a Brass Band” all come at moments she thinks she’s finally made it, those dreamy realizations (or delusions) that “somebody loves me at last.” It’s no coincidence they all start out spoken and, in the case of “Friends” and “Brass Band,” conclude with showstopping dance numbers. She can hardly believe she might have found love, and a lot of the show’s lyrics reflect this emphasis on self-image.

“You Should See Yourself” is a projection of a dream lover onto a loser; “If My Friends Could See Me Now” is about how she thinks her friends would react if they only knew how cool her life really was; “There’s Gotta Be Something Better Than This,” sung by her and two fellow ‘taxi dancers’ is about manifesting a perfect lifestyle and “Baby, Dream Your Dream” continues this theme; “I’m the Bravest Individual” is about willing your best self into existence; “I’m a Brass Band” is a flight into dazzling, love-induced mania; and “Where Am I Going?” is a self-therapy session in which Charity asks herself, “Looking inside me, what do I see? Anger and hope and doubt––what am I all about?”

These songs are about seeing yourself, about how you want others to see you, and how those two might someday match up. It’s no wonder they often lead to extravagant dance numbers, they’re dreams let loose on a footlit stage. Fosse then beautifully translated this onto film in the adaptation, turning his camera into the characters’ own dream machines.

The 2016 Off-Broadway revival with Sutton Foster fell short of the dream in its insistence on being a gritty, proto-#MeToo era look at a sad dancer’s sad life at the hands of sad men. The musical is partly that, but it needs to show its lead’s ecstatic highs in order to adeptly explore her devastating lows. She finds herself living “hopefully ever after” and, more than any other musical I can think of, Sweet Charity explores the beauty and the tragedy in that lovely little line.