BLINDNESS In the Lonely Dark — REVIEW 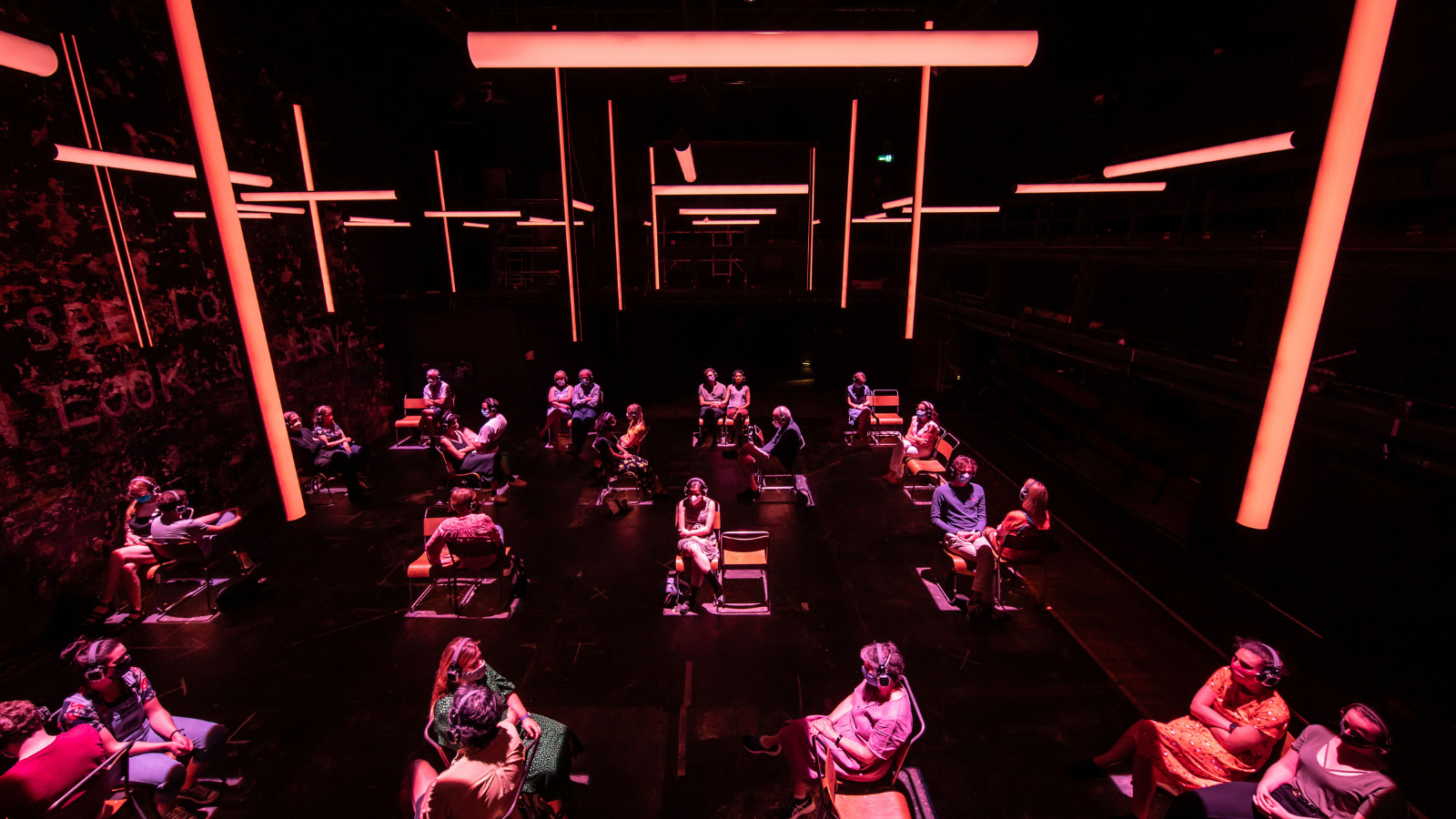 "Blindness" at the Donmar | Photo: Helen Maybanks
By
Juan A. Ramirez
&
on
Category:
Reviews

Because carrying grains of salt is now as sensible an idea as any, it is fitting that the first indoor theatrical experience available to New Yorkers since the outbreak of the COVID-19 pandemic should be one with no actors, no stage, and barely anything to see. The saving spoonful of sugar here, though, is that Blindness, down at the Daryl Roth Theatre, is a dark-room delight that, unlike other Downtown goings-on, remains socially distant.

The production transfers to our shores after an acclaimed run at London’s Donmar Warehouse, where Simon Stephens’s adaptation of José Saramago’s dystopian novel about a world descended into chaos wowed critics and audiences. They might have been as starved for reasons to leave the house as we are, but the hype here is anything but blind.

Those wary of the traditional Manhattan elbow-to-elbow proscenium experience can rest assured that the only thing with which they will come in contact here is their own fears. Lizzie Clachan’s simple set evokes a socially-distant classroom: isolated two-chair pods facing one way or, more sinisterly, just off-center from facing each other; fluorescent light beams hang menacingly overhead; and, surrounding the space, black curtains which soon come to consume the proceedings, as the titular predicament sets in, not just for the characters, but for the audience. Plunged almost entirely in darkness, Blindness becomes an electric sensory experience.

Hanging on each chair is a pair of (sanitized) headphones, through which Olivier Award-winner Juliet Stevenson recounts the tale of an ophthalmologist’s wife, who is somehow the only person not afflicted by a sudden pandemic of blindness that impairs more than just people’s sight. It doesn’t take long for massive civil unrest to break out and, in typical far-away dystopian fashion, the government quickly gives up on its citizens and lets them fend for themselves––to suitably mixed results.

Stephens, who won a Tony for adapting “The Curious Incident of the Dog in the Night-Time'' into a similarly unconventional work of tech-heavy theatre, doesn’t quite evade the traps set by what is essentially an exercise in audiobook composition. There are stretches of narration that feel, well, like narration, rather than performance––and Stevenson’s intense commitment is certainly not to blame.

Aided by Ben and Max Ringham’s excellent sound design––if you missed the close-contact experience of someone whispering into your ear, think again––Stevenson’s performance breaks through the would-be tedium of a one-woman audio show. Alternating between the role of the storyteller and the ophthalmologist’s wife, her voice is dynamically suited for the task of guiding listeners through the hellish medical center where the bulk of the story takes place.

The show is billed as a “sound and light experience,” and lighting designer Jessica Hung Han Yun knows exactly when and how to deploy the show’s co-star. It is hard not to have these things feel like a cheap carnival ride, and Hung Han Yun manages to create a character out of the cave darkness in which you are submerged for most of the show. When the lights flash––and they sometimes do with a punishing intensity that sears your vision––they are not so much reminders of what was lost, but lacerations for the cruelty of our species.

The particulars of the story are not exactly memorable, though the obvious pandemic parallels inspire equal parts awe and eyerolls. What elevates this production, aside from Stevenson’s performance and the brilliant technical craft, is its bravura ending. The narrative finale itself is rushed and, again, don’t ask for specifics. But director Walter Meierjohann’s masterful inversion of the typical fall of the curtain is one that inspires hope, not just for the beleaguered characters, but for the end of this overlong plague.

“Blindness” is now playing at the Daryl Roth Theatre. For tickets and more information, visit here.