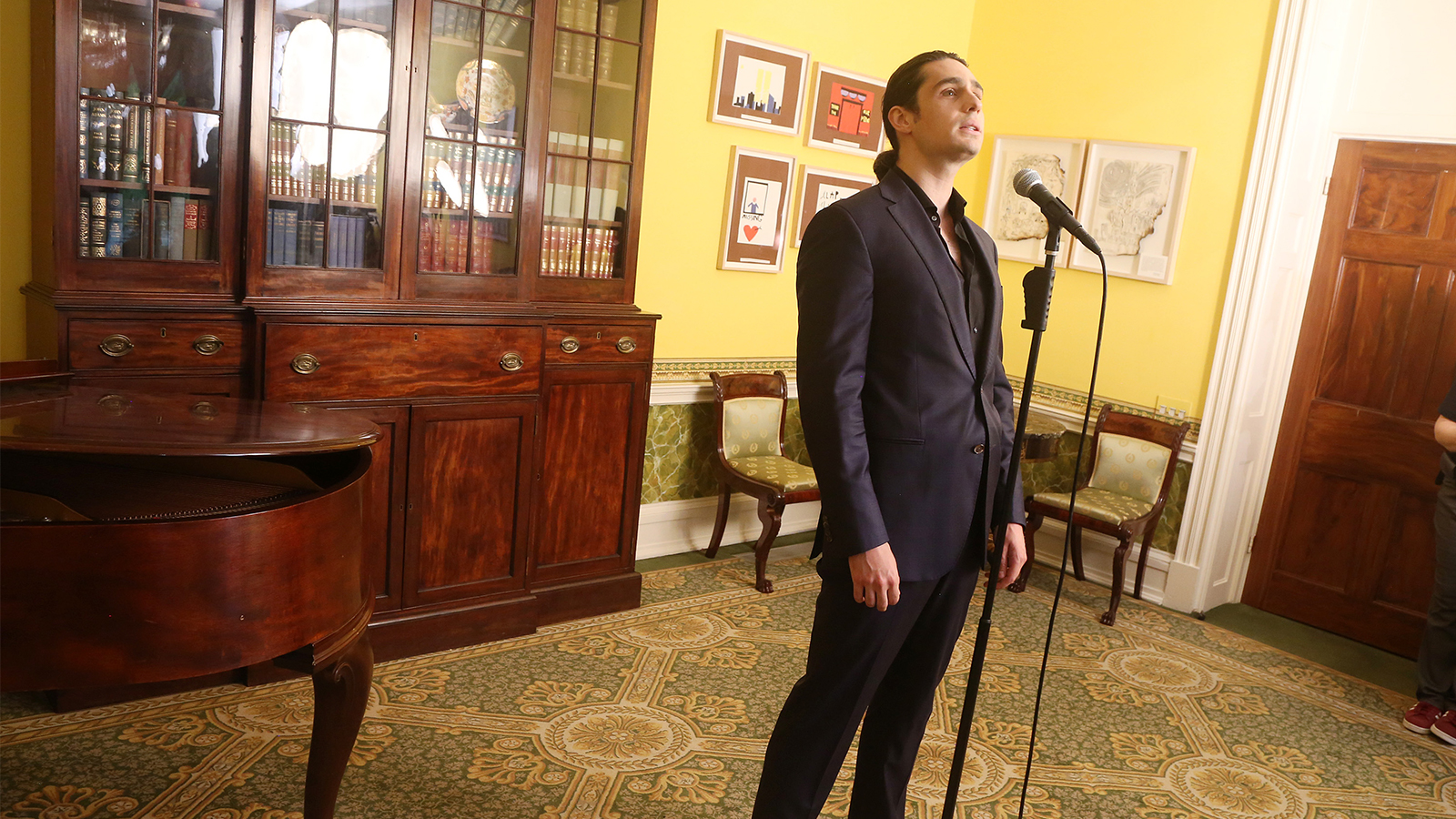 The Cape Playhouse is back for an in-person summer season! After a stellar performance from Rema Webb in Lady Day at Emerson’s Bar & Grill in July, the Cape Playhouse has put together a stellar cast for Jason Robert Brown’s Songs For A New World. We caught up with Bobby Conte Thornton, playing “Man 2”, as the show moves rehearsals from New York City up to Massachusetts, on what it's like to be performing in a show for the first time in sixteen months.

Hey, Bobby! How has it been out on the Cape?

This is my first time here — it's so beautiful. I'm excited to start exploring a little bit.

How have rehearsals for Songs For A New World been going?

It's been wonderful. We did three days of rehearsal in New York City, which was nice to get all that music under our belt slowly but surely.

And what's your Songs For A New World story? I feel like everyone in the theatre has one.

I don't even remember when I heard Songs For A New World for the first time. It must have been when I was a teenager in high school. So I've always loved it, but this is the first time I've ever gotten to be a part of a production of the show, which is amazing.

And you've got a fierce cast behind you, tell me about working with them.

They're extraordinary! What's great about the structure of the show is that it allows for these four very distinct vocal types and qualities and tonal experiences to all converge, so it's people that can bring out their idiosyncratic natural selves, not only as actors, but especially as vocalists. And this material, it's so amazing when we can all be of service to each other when we're singing and group numbers, or, as we're starting to do now, watching what all of everyone's doing in their solo numbers to see the extraordinary work that we've done in that scope. So it's amazing.

Is this the first show that you've been in-person since the pandemic?

Well, I have a solo cabaret that I do because I put out my album, Along The Way, this year, so I've done a couple of those at various parts of the country this year. But this is my first venture back into live theater.

How has that felt for you being back on a stage singing and acting with other people in a year and a half?

When we're on stage and it's in front of people, that'll be its own experience, which I don't think really any of us are prepared for. I can kind of envision it, but I feel there's going to be a lot of shit that's going to get stirred up finally when we're present in the moment with people watching us. And the Cape Playhouse's structure of the summer programing so that it's on the lawn, it's all outdoors versus in versus inside. So that'll be a fun experience as well. I've seen people on bleachers and I think some people will literally be in lawn chairs that they bring or sitting on picnic blankets and things like that. But when we're actually standing on stage with an orchestra behind us, for hundreds of people applauding us and waiting in anticipation and wanting to go on a journey with us... yeah, I'm not sure how that's going to feel, I assume it will feel overwhelming.

And Along The Way came out right at the beginning of the pandemic, is there any song on the album that sort of has resonated with you in a different way because of the pandemic?

I think "Time Heals Everything" is a little on the nose in that sense. What's the lyrics that I was thinking about the other day? "I'll forget you by next year, some year...some Tuesday, Thursday, April, August, Autumn, winter, next year, some year." Clearly, that is just resonating far more than I ever would have anticipated during this time, because I know I've spent, many people, a lot of this time alone, perhaps with family or perhaps with a loved one. But it's finally been forced to take stock of how you live daily life and how you present yourself to the world on a daily basis and how you relate to your fellow man and woman and the world. So I think in retrospect, it's been quite the healing process, that ultimately this was a necessary antidote for our country and for our world. And that doesn't take away from the trauma that we've naturally all experienced and that we will still continue to experience as we are by no means out of the weeds whatsoever. But in retrospect, we can start to see the positives of how this was a necessary healing to take place for us all to enter this new version of normal with a greater sense of empathy and self-awareness.

And I feel like a lot of the art that's been created over the last year and a half is just a reflection of that trauma and shift in perspective in how this new normal is working and a shift in priorities for people.

Totally, and what's amazing about doing Songs For A New World is that's what this show is dealing with. It feels like the perfect thing to come back and for me, especially, dip my toes back in the water of performing and bringing myself to a character. We're finding it's very a soulful experience just in the few days we've had rehearsing it, because it's all about when you're on the precipice of change, when you're in that moment where you can either go down two very distinct paths, what you choose to do. I think that will always be timely, but it seems especially timely given the last sixteen months we've all been collectively living for.

I remember New York City Center did Songs For A New World a couple summers before the pandemic, and you think about it a certain way, and now this time just changes your perspective and the show just takes on new meaning.

And once you're done at the Cape Playhouse we're so excited that Company is coming back to Broadway! What is that process looking like right now, and what are you excited for when you return to that company?

Yeah! The plan is to start rehearsals in October. You know, the cast has been in constant communication over these months. We were doing weekly Zooms for the vast majority of this time, we were all over the country and still wanting to find a way to check in. And now it'll just be a whole other thing when we're finally back. I've seen a couple of people in person since I was out of New York City for a vast majority of this year. So coming back, I've been able to see a couple of people and that's been so joyous, and for when we're all in the space together I think it's just going to be very overwhelming. The first couple of hours, you know, we'll be weeping in each other's arms and then we'll get down to brass tacks and relearn this show. I mean, I think there are some things that are so ingrained in our bones that we could never forget them. But it's going to be a reexploration for all of us, which is what it should be. I think Marianne [Elliot] has been on record saying you can't get a bunch of creative people in a room without wanting them to tinker and rethink things. And after these sixteen months, you have to sort of go back to the drawing board in every regard, especially if theatre is supposed to be for the times we're living in, theatre is not meant to be museum pieces. You can honor material that existed. Company has existed for what now, over 50 years, but you can present it in a way that speaks to the time we're living in while simultaneously pondering the intentions of the writers when they were creating this. And so naturally, we need to speak to the times that we're living in without being too, you know, on the nose. No one wants to see people just walking around with masks on stage the entire time because we're here to be entertained in the theatre, we want some version of escapism. But what's been great about Sondheim throughout his entire career is him holding up a gentle mirror to especially New York metropolitan society and saying, "this is your life and how are you going to walk out of the theatre a more self-aware, empathetic human being afterwards?" You would rather have people thinking coming out of the theatre than entertained in that sense.

Songs For A New World is now playing at The Cape Playhouse through August 14. For tickets and more information, visit here.