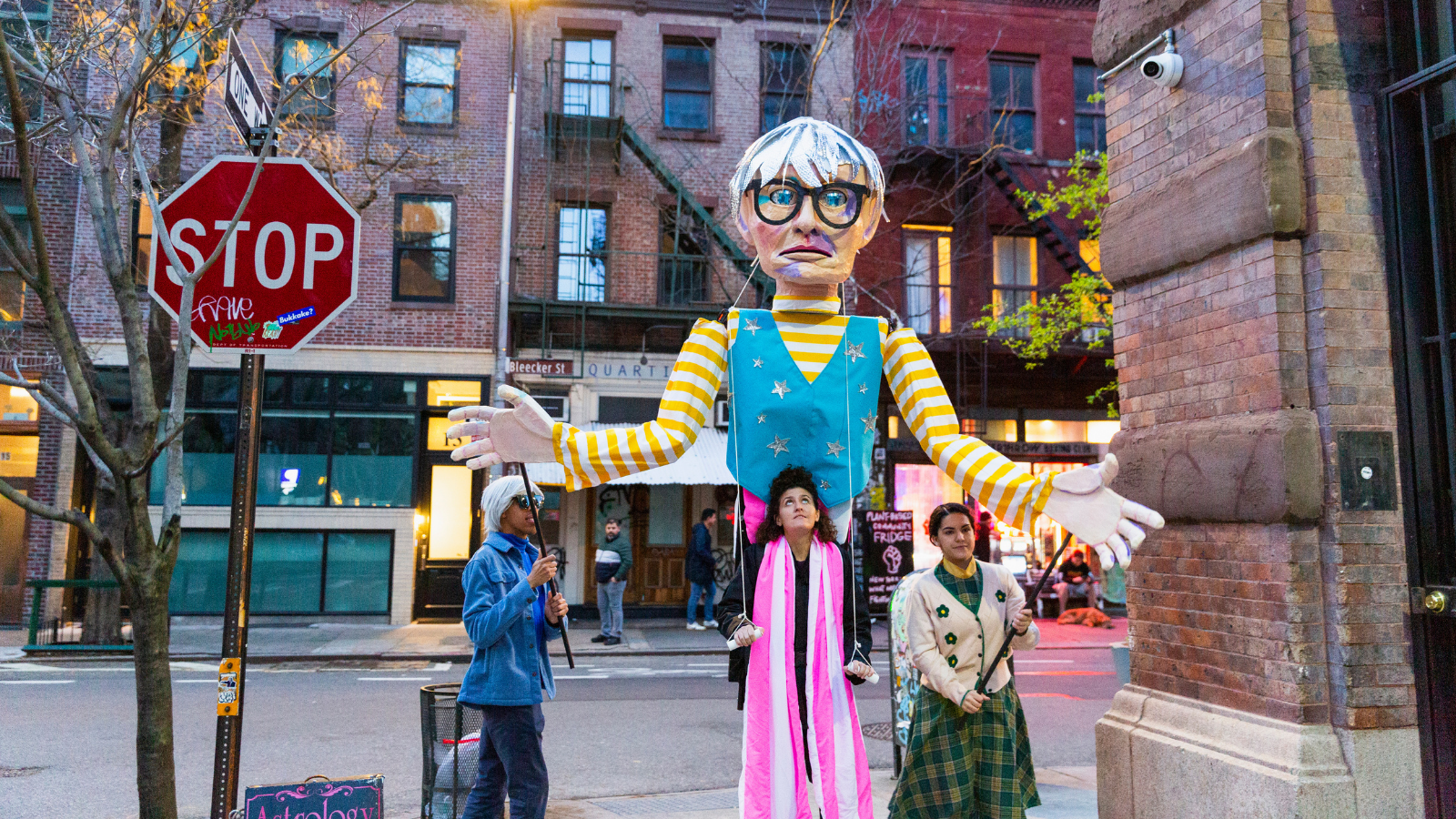 If you are wandering the Village any night soon and run into a merry band of Andy Warhols, please treat them kindly. It’s an art project.

I stress the kindness part because these Warhols are really, truly out there in these streets. The immersive walking tour Chasing Andy Warhol traverses busy portions of the East Village without a care in the world, weaving an audience of 16 up East 8th Street, down the Bowery, and all around Astor Place.

When Bated Breath Theatre Company last took me on a walking adventure, at least the city was a little calmer. That was Voyeur, a thin but visually stunning dive into the life of artist Henri de Toulouse-Lautrec, back in October 2020. New York was certainly alive again by that time, but normality was a ways off. The elegant chaos of dancers and puppets traversing sidewalks blended a bit more comfortably into a city still making its gradual return.

Now the foot traffic is back, drivers are losing their minds, and the city feels tense amid recent violent incidents. Is it the ideal moment for Bated Breath’s return? Warhol certainly isn’t shy about throwing its performers into the mess: first young Andy tosses a basketball to his high school bully over the heads of passers-by, then Valerie Solanas strides down Lafayette calling for all men to be put to death, and later a trio of Warhols dance in a public square. At my performance they encircled an unsuspecting delivery driver, who was really just looking to take a coffee break.

All of this is intended to capture the cultural soup of the neighborhood, the faux glamor of artist life butting up against the daily churnings of a city that just keeps moving. That clash would have been more pronounced in Warhol’s time, but here it still basically works. Maybe, in the case of that driver, it felt more obnoxious than artful—but, then again, artists are.

The immersive staging is the main draw and, nervousness for the performers aside, in this area Warhol does deliver. Mara Lieberman’s lively, colorful direction offers a surprise around every corner, from interactive photo booths to a 10-foot-tall Warhol puppet which briefly takes over chaperone duties. In one particularly impressive sequence on Cooper Square, it truly feels like new Warhols are popping up from every direction.

As with Voyeur, the original puppet creations (here designed by Tanya Khordoc & Barry Weil of Evolve Puppets) are a highlight. The aforementioned giant Warhol is a delight to behold. Even more memorable is a child-sized puppet which appears earlier, as we learn of Andy’s childhood struggle with a neurological disorder. It’s a wonderfully melancholy creation, a delightful design that suggests a very sad little boy.

The task here is tougher for Warhol’s human performers. As Warhol obsessive and audience guide Jess, the charming Annika Rudolph is mainly tasked with vamping at crosswalks. Alessandra Ruiz makes a stronger impression as Valerie Solanas, the radical feminist author who shot and nearly killed Warhol. But the piece doesn’t have room for a fuller picture of Solanas, a fascinating figure in her own right.

As Warhol, Brandon P. Raines gets the hardest assignment. He is the show’s beguiling center, the distant figure we chase through Village streets. As directed by Lieberman, his Warhol must remain remote. This Andy has no interest in explaining himself, or indeed, in speaking much at all. I believe that’s true to the man. It also ensures an experience that’s often clinical. Raines is impressively committed to that impenetrability, only allowing slight hints of sadness to seep through right near the show’s close, after Warhol is shot.

That’s the Andy Warhol this show ultimately offers: an unknowable figure, a true artist who existed exclusively through his work even while still living. Anyone looking for new insight into the man will leave disappointed. But the messy collage Bated Breath has strewn across the Village does have a strange unreality to it, and that proves fitting.

Chasing Andy Warhol is now in performance through August 21, 2022. For tickets and more information, visit here.