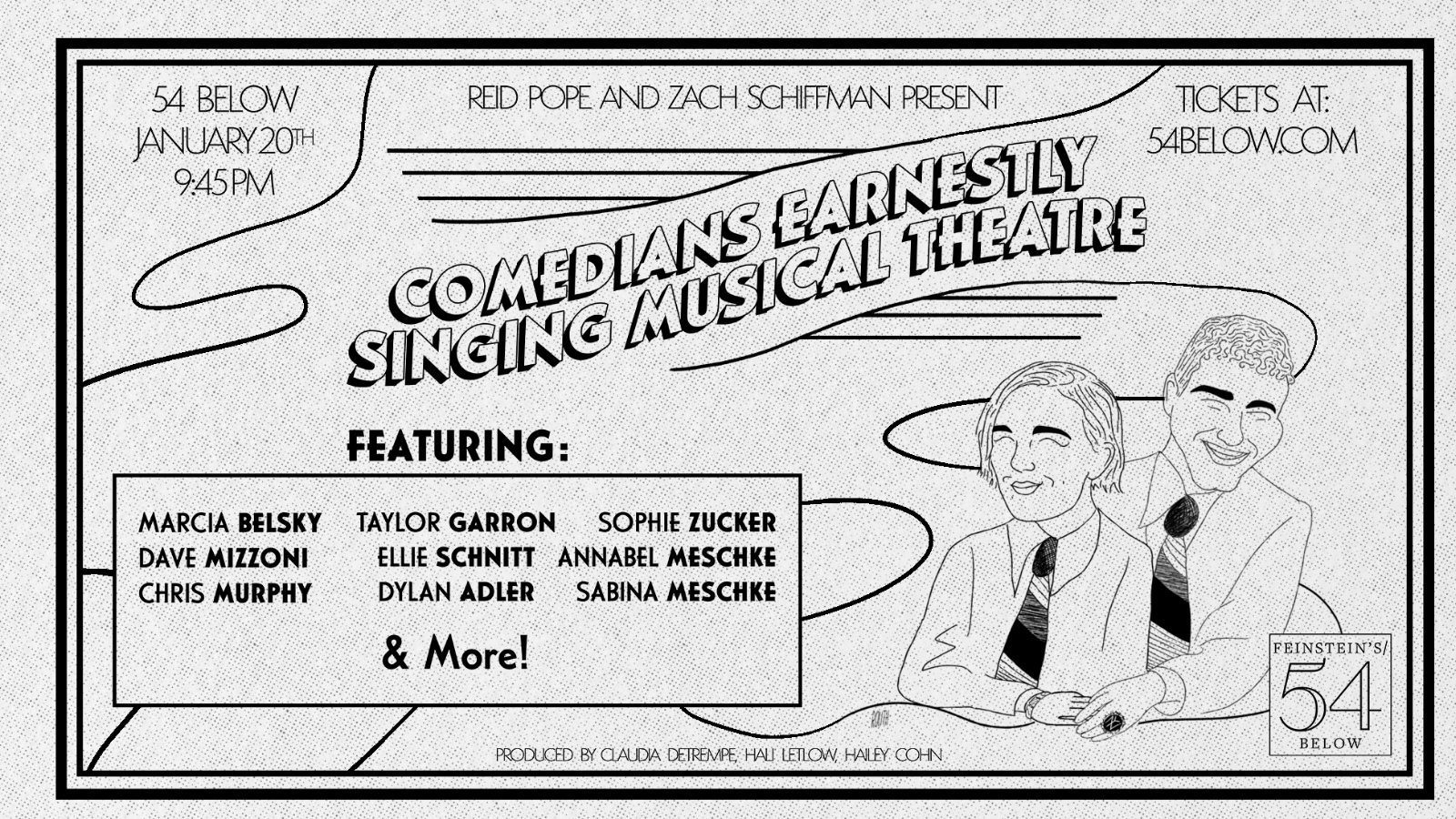 Writer-comedians Reid Pope and Zach Schiffman are three things. Comedians, musical theatre fans, and very online—decide for yourself whether the list ascends or descends in unfortunateness. But, as such, they’ve gathered up a crew of fellow three-peat offenders for a show titled Comedians Earnestly Singing Musical Theatre, which promises (threatens?) fresh takes on popular showtunes.

They’d done a digital version of this, back in November 2020, hosted Brooklyn Comedy Collective on their TVCO service. Per Schiffman, “everyone performed on Zoom, and it was streamed to a now-defunct app.” This time, they’ve booked Feinstein’s/54 Below for a late January show.

I thought it’d be fun, given the funny people involved, to ask them a bit about comedy in musical theatre. Their answers have been edited for clarity.

Besides the one you will be performing at the show, what’s a song you think would benefit, or drastically change, by a comedification (like yassification, but comedy)?

I would do a burlesque version of “Jacob And Sons” [from Joseph and the Amazing Technicolor Dreamcoat] with a bunch of twinks. Big daddy energy. Am I allowed to say that on this website? SORRY. But it's my truth.

It’s regressive to say that I would make songs funnier just because I want to sing female songs, but I do think I could make “Astonishing” from Little Women both moving and hilarious. There was a time, as we were developing our 54 Below show, when I was going to show up half-way in full Jo March attire and belt 32 bars of my best Sutton—or really… Elyse Bell from the 2019 Jimmys—and exit without comment, but I’ll be keeping my tux on all night.

A comedification of “Sounds While Selling” from She Loves Me a la @OverHeardNewYork, would be hysterical, and also disgusting—a hodgepodge of the repulsive electricity of this two-horse town we call New York. It could take place in the subway during a character’s commute, the bell sounds replaced with subway recordings and strangers’ screams.

Unfortunately, my first instinct is to say “Waving Through a Window” from Dear Evan Hansen. It pains me to admit that when I saw that show, I did cry a lot because it grabbed my inner depressed teenager by the throat and said, “Stay down, bitch!” So I think it could be redone as… me talking about being addicted to looking into ground-level apartment windows to see how they’re decorating. I am a Peeping Tonya and I can’t stop and I’m sorry.

Everyone says that Ben Platt was too old for the Dear Evan Hansen movie; I disagree. I think he was the only one who was the right age. Make everyone 30 and you have a hit on your hands. I would be the friend and just up the gay panic 20 times. Have gay anxiety attacks all night.

“Oom-Pah-Pah” from Oliver! Why is Nancy singing about getting dicked down in a musical about orphans?

The creepy version of “Johanna” that Judge Turpin sings in Sweeney Todd. A true deep cut, but I will always laugh at some old guy jerking it real hard on stage. ‍

I love a show that feels like it could be a cartoon, like The Book of Mormon or Urinetown. But, I gotta say, the funniest kind of musical theatre song is one that takes way too long to explain something irrelevant or niche, and barely advances the plot or the characters. For me, that's a Guys & Dolls song that I thought was called “Horse Right Here” but is apparently called “Fugue for Tinhorns” (random?). Men singing for way too long about the horses they're betting on, often performed by 16-year-olds in fedoras—classic comedy.

I think musical theater doesn't get enough credit for being funny. I love, for example, Donna Murphy's iconic rendition of "Could I Leave You" [from Follies] at the Sondheim 80th Birthday Women In Red concert—a song that's funny because of, not in spite of, the story it's trying to tell. Musical theatre does a great job of recognizing comedy as part of the fabric of life.

Comedians Earnestly Singing Musical Theatre will play, and be livestreamed from, Feinstein’s/54 Below on January 20, 2022. For more information, visit here.