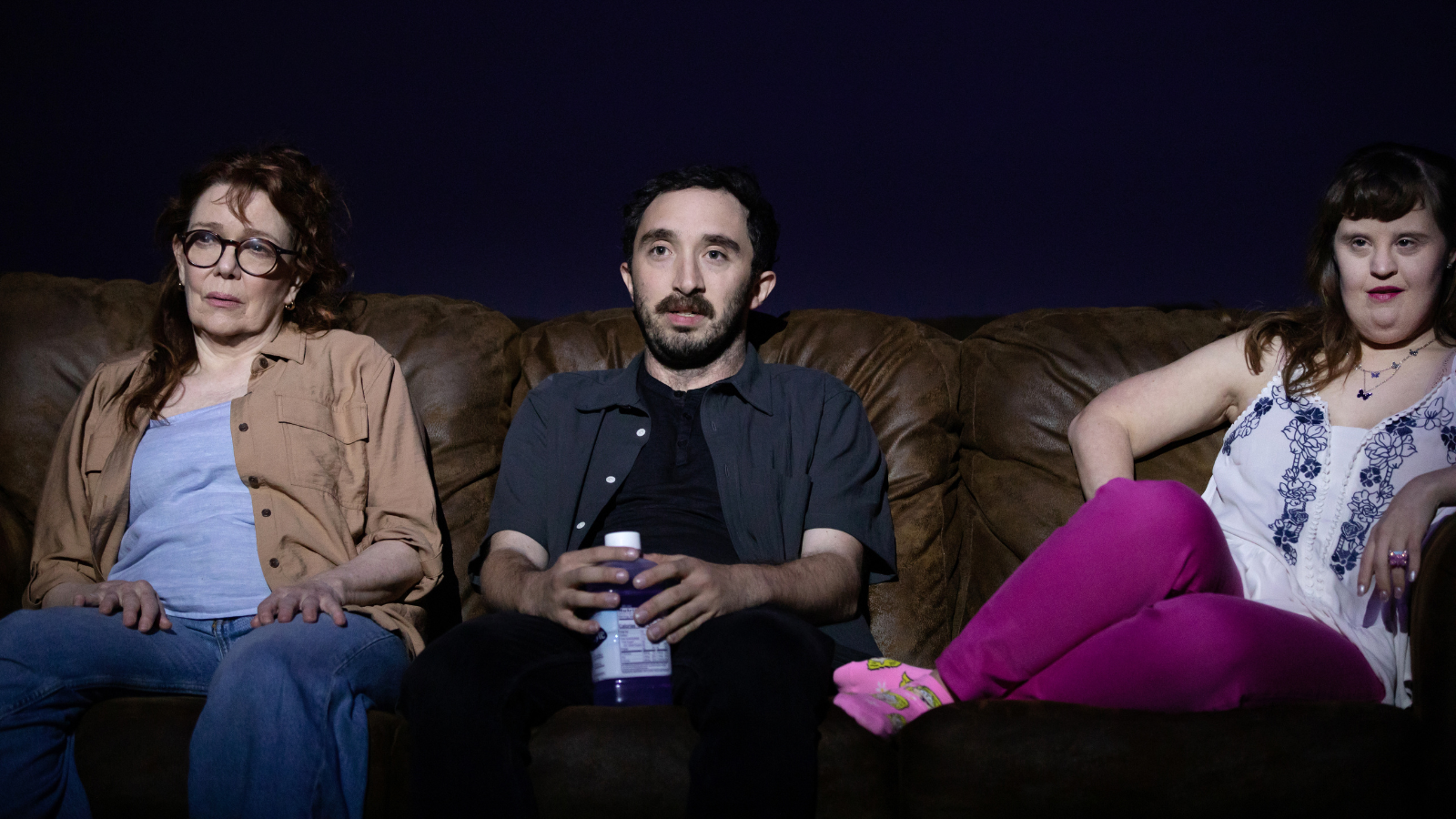 Will Arbery’s Corsicana, a two-act study in alienation, often cuts too close to that intended affect to land in a satisfying, or even totally compelling way. Perhaps because the play is partly autobiographical, set in the titular small Texas town near the playwright’s native Dallas and following a brother-sister relationship much like his own, he is too invested in the intangible feelings of its dynamics to create a clear, digestible picture. Now in performance at Playwrights Horizons, it glimmers with moments of brilliance but is ultimately too arid a portrait to properly appreciate.

What the production, ably directed by Sam Gold, unassailably features is four remarkable performances, centered around the nervy-nerdy Will Dagger as Christopher, the Arbery stand-in with decaying dreams of filmmaking stardom, and the touchy-touching Jamie Brewer as his older half-sister Ginny, whose Down syndrome merely reflects conflicts experienced by all, rather than shoulder its blames.

Following their biological mother’s death, Christopher seeks the aid of kind librarian Justice (a motherly Deirdre O’Connell in her first post-Tonys role) in enlisting reclusive artist Lot (Harold Surratt, outstanding) to spend time with Ginny, with the vague goal of creating a song, but really to just get her out of her shell. In keeping with the Texan landscape’s aridity, none of the characters are overflowing with communicative skills.

Corsicana is a play filled with pauses, pregnant with unfulfilled promise and profound regret. In this premiere production, its story and dialogue reflects this; its performances magnify this; the lonely vacancy of Laura Jellinek and Cate McCrea's set  encase this;  it all becomes too much, reaching an impenetrable pinnacle in the scenes between Ginny and the possibly-undiagnosed Lot. Surratt’s performance is stunning, full of indecipherable movements and reactions, but winds up toppling the work’s tall stack of silenced anguish with its potency and inscrutability.

The gestures towards grandness Arbery sprinkles throughout, like the names Justice and Lot, surely mean something, but only add to the long list of examinations with which the audience is burdened. Same goes for figuring out why the set — its two couches positioned on a turntable as inverted mirrors of each other, under a corrugated roof that is hoisted out over the audience — does what it does. It all becomes too much, and this is without even beginning to take its characters’ deeply felt emotions into consideration.

There is a lot to admire in this production, though, like Isabella Byrd’s haunting lighting design and Arbery’s gorgeous character details. Ginny’s obsession with Lizzie McGuire-era Disney Channel, for example, is both telling and often hilarious. Corsicana feels like one of Ingmar Bergman’s harsher works you admire for its rigor, but seldom return to because of that very strictness’ punishing nature. It is a work that reflects genius without constantly or properly finding its correct outlet. There are, of course, far worse things to be.

Corsicana is in performance through July 10, 2022 at Playwrights Horizons on West 42nd Street in New York City. For tickets and more information, visit here.