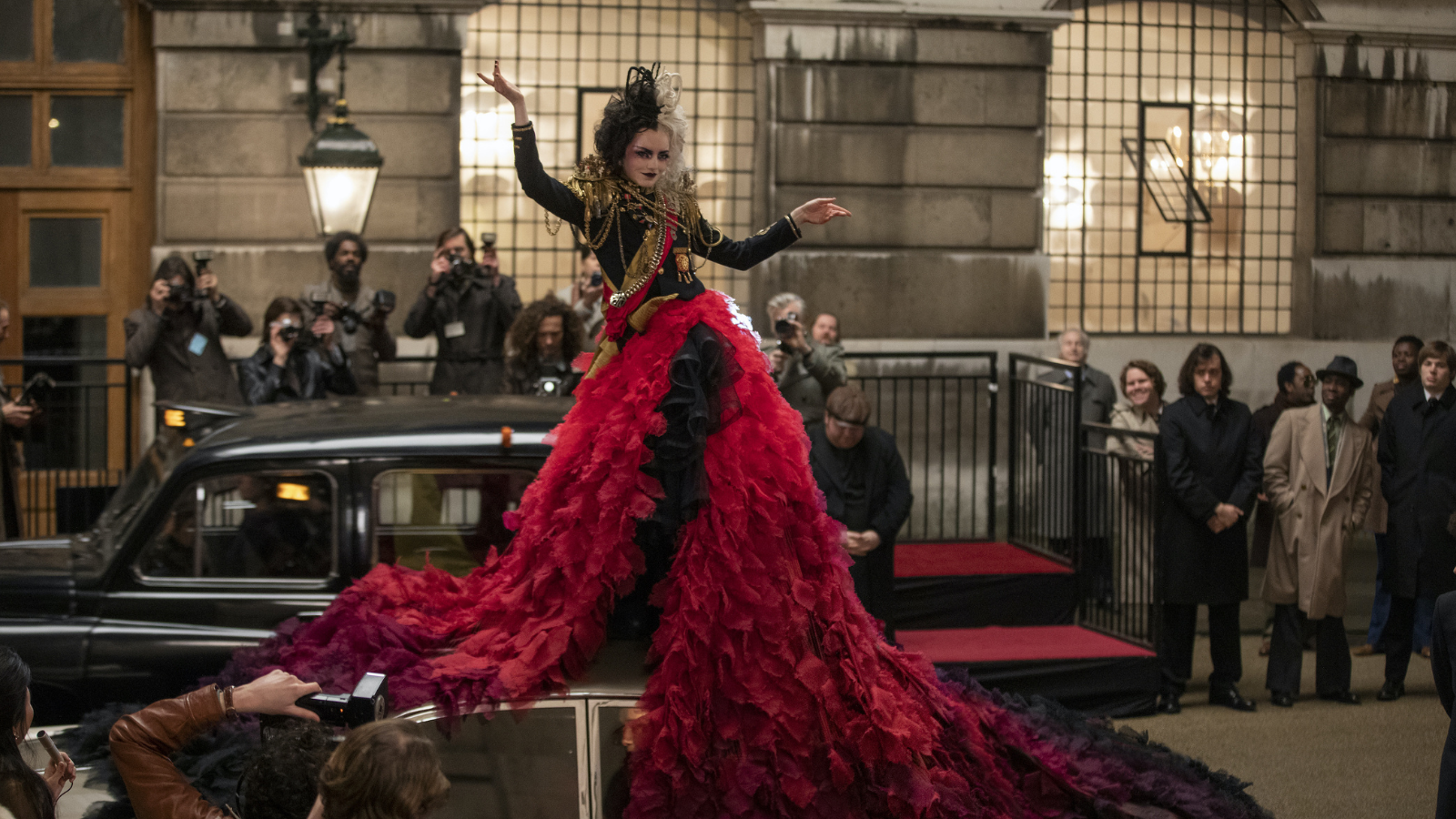 The only trend worse than the current one of making unnecessary origin stories is Disney’s wave of making live-action remakes of untouchable masterpieces. Cruella sits right in the middle of this busy intersection—might as well be Times Square at this point—but like a mistake that nine months later turns into a beloved, if troublesome, child, it is a welcome addition to the landscape.

This is entirely due to four people: stars Emma Stone and Emma Thompson, director Craig Gillespie, and costume designer Jenny Beavan. They have somehow wrested a “She did that!” romp from a studio which had almost certainly not banked on anyone actually enjoying their releases.

So what is it she did? Estella Miller (Stone) undergoes the requisite tragic—albeit unintentionally hilarious—childhood experience and emerges as Cruella, a lightly anarchistic designer/gossip page fixture bent on making her own in the world of ‘70s London fashion. Hurting under her fabulously mean boss, the couturier Baroness von Hellman (Thompson), she goes full Joker: wreaking havoc on the establishment with a vengeful, theatrical grin.

God forbid I tell anyone to turn off their brains in order to enjoy something, but the cataclysmic tragedy that leads to her alter-ego is on another level of ridiculousness. I’d call it camp, but I don’t wish to get yelled at by that word’s limp-wristed gatekeepers. You know what else is ridiculous? The way the film uses Black characters as “others” with which the outsider Cruella can relate; the mid-credits scene that finally ties in the 101 Dalmatians saga into the otherwise unrelated plot; the constant needle drops that might have you wondering what Nina Simone’s “Feeling Good” has to do with anything on screen; the notion that the film engages with the gritty punk anarchy of ‘70s and ‘80s London.

Perhaps most ridiculous is the impulse to pathologize villains beloved for their delicious wickedness. We should not be reaching into Freud in order to enjoy Cruella de Vil. In the original tales, she kills dogs because she does not care for them, and that is enough. Anything else is for the actor, or animator, or whomever, to add a bit of flair so queer people can identify and stan. So why turn off your brain?‍

Because it’s so much fun.‍

Gillespie, whose I, Tonya provided a similar revision of an infamous bad girl, channels some of that film’s dark humor into the Disney property. He doesn’t fully evade the intellectual property traps set by Dana Fox and Tony McNamara’s screenplay, but he brings an irreverence that keeps the 134-minute runtime fresh and exciting.

In Stone—who can apparently do no wrong—he has a charismatic lead that plays both sides of her character with attractive commitment. In Thompson, he has a veteran character actor capable of turning what could’ve been a phoned-in performance into a tasty, furry meal. I am nearing exhaustion with Paul Walter Hauser’s brand of bumbling, durrr sidekickness, and he provides as much playing one of Cruella’s henchmen. John McCrea, the original lead of the West End’s Everybody’s Talking About Jamie, makes good on his rising talent as a Carnaby Street store owner.

The film is at its juiciest when following Cruella and the Countess’s catty workplace interactions. It is at its absolute juiciest when it lets Beavan loose on the Vivienne Westwood-inspired costumes. Cruella’s MO is to upstage the Countess at every turn, showing up at glossy fashion shows in increasingly sickening looks. A large chunk of the movie is just upstage after upstage, each one giddier than the last. There is an outfit reveal involving a dump truck that matches Rita Hayworth’s hair-toss in Gilda in its gasp-inducing splendor.

Now that I’ve compared a multimillion Disney cash-grab to one the greatest films of all time, allow me to conclude by saying Cruella did not need to exist, but it also did not need to be this enjoyable. There is a world in which Disney pours this much money into an original idea, trusting that audiences don’t need to rely on the most marginal of childhood associations to buy into a new story. We are not in that world and I am certainly not advocating for our current one. But for what we’ve got, we could do a whole lot worse.

‍“Cruella” is rated PG-13. In theatres and on Disney+