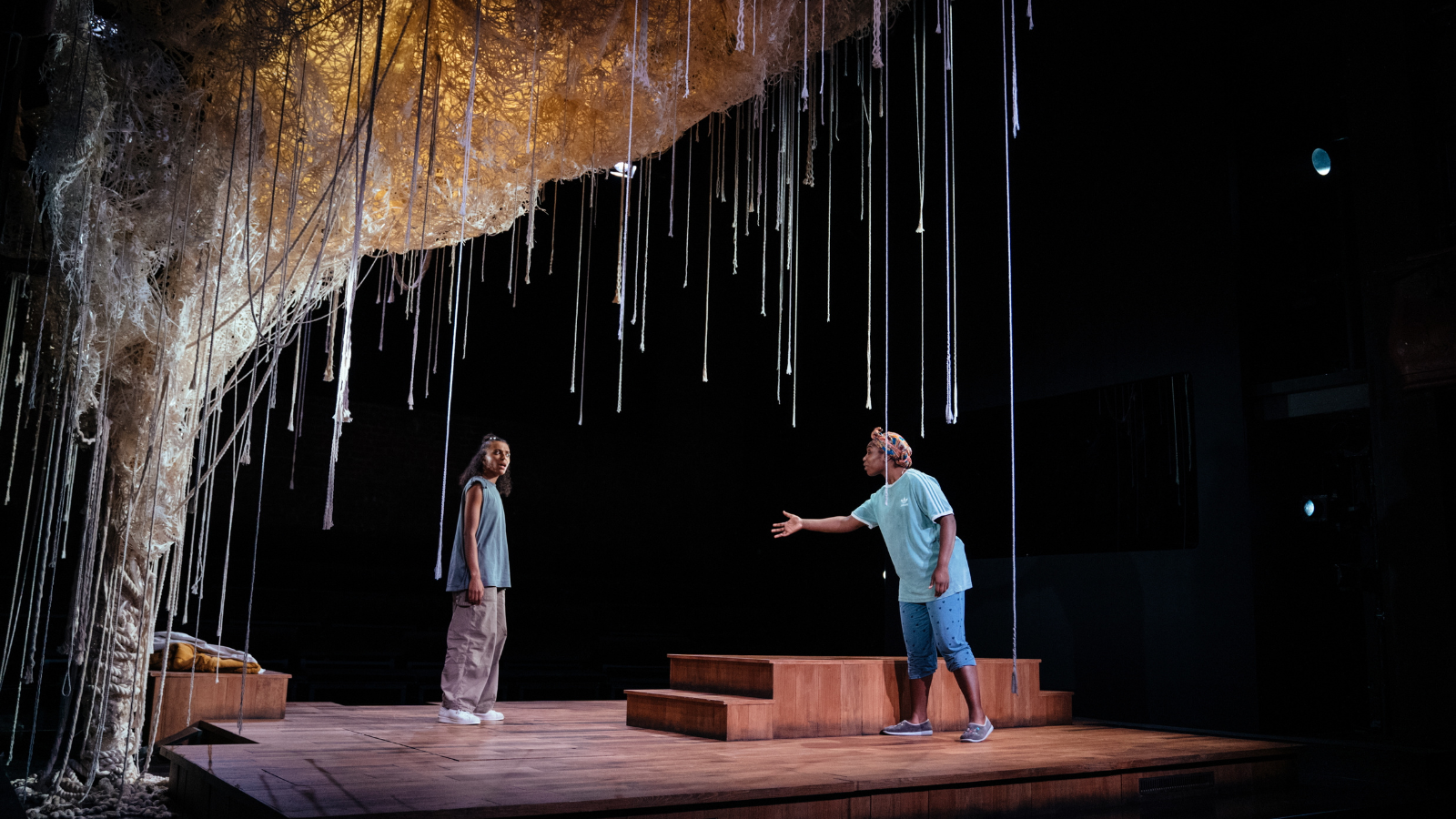 I’d been wondering how they’d stage seven methods of killing kylie jenner since it was first published in 2019. Jasmine Lee-Jones’  uproarious, formally inventive play incorporated quote-Tweets, unfollows, and almost enough memes and online slang into the script to ensure almost no one over 40 could understand it—and few theatremakers could produce it. In it, Cleo, a Black British teen unspools a gruesome Twitter thread of possible deaths for the titular socialite, who Forbes dubiously crowns the world’s youngest self-made billionaire at the start of the play (and IRL). Partly for the lulz, partly fr, her bloody inventions come from real annoyance and hurt: here comes this privileged white woman to claim a misbegotten crown off a cosmetics empire built on the stylistic backs of curvy, thick-lipped women like Cleo, who has spent her entire life being categorically punished for possessing those very qualities.

Her lifelong friendship with Kara presents somewhat of a release, but up to a point—she is lighter-skinned and, therefore, in Cleo’s eyes, not as burdened by her race. If our Twitter star’s ability to dismiss her best friend’s advice and recognize that her queerness might also complicate her existence, it is because Lee-Jones is as interested in racial sociopolitics as she is in the dynamics of online behavior. The brilliance of seven methods is that it becomes as much a play about the limitations of logic when subjected to extreme historical trauma as about the appeal of leaning into your own abjection; exacerbated by the polarizing online attention her Twitter thread receives, Cleo doubles down on ideas she might not fully espouse—for the thrill and for the clout.

It’s a lot, even if reading Lee-Jones’ blisteringly funny cyber script feels like a breezy romp. So it is disappointing that London’s Royal Court Theatre production, which premiered the work in 2019 and now brings it stateside, burdens its muchness with its own misguided aesthetics. Directed by Milli Bhatia, on a set by Rajha Shakiry which evokes a slave auction block under a strange, hanging art piece made of interlaced ropes, it takes the text on a haunting, paranormal route instead of the bedroom-bound cyberage manifesto it promises. Employing muddled vocal effects (sound design by Elena Peña) and lighting cues (by Jessica Hung Han Yun) to distinguish Cleo (Leanne Henlon) and Kara’s (Tia Bannon) speaking voices from the many Tweets they recite, during which the two girls appear possessed. The production visually uses no technology, instead leaning into a ghostly atmosphere that doesn’t quite work. If it is saying that we are possessed, not ourselves while online? Snooze.

The effect is that of a creative team wanting to get ahead of expectations by not delivering the material in its simplest form—a regrettable decision when the production is the first presentation of an already formally challenging work. With so many memes and visual references an essential part of the play’s language, it is to the production’s detriment to eschew screens that can quickly and effectively reference these, relying instead on the actors to somewhat act them out, mid-scene.

There’s a whole lot that gets in the way of Lee-Jones’ brilliant text, and though this premiere production, which will make its way to Washington, D.C. next month, falls far below its promised greatness, it still announces a quick-witted, incisive new voice in social critique and comedy.

Meanwhile, there is nothing standing between Rachel Mars and the material in her show Your Sexts are Shit: Older Better Letters, which is as direct as a PowerPoint lecture and about as compelling. It’s hard to criticize something for delivering exactly what it promises (see: the Arrested Development Dead Dove Dilemma), especially when it clocks in at just 60 minutes, but there is nothing particularly theatrical, or necessitating liveness about the work, which presents erotic letters from Mozart, Georgia O’Keeffe, and Eleanor Roosevelt, among others. These are read by Mars from individual scrolls, with a screen on the wall presenting some historical context.

It begins, and peaks, with a series of messages from James Joyce, who apparently had a major scat fetish. The shock-value laughs become tiresome, especially as none of the following letters match neither their explicitness nor their level of kink. There’s a vague attempt at the reclamation of queer femininity, mainly through the intervention of Mars’ own sexts and romantic exchanges. After a while, though, these become less noteworthy and begin to give off an icky sense of “Look, I have sex!” exhibitionism that brings the work right into the playground. (Mars at one point announcing she had—has?—an inclination towards sadism colored the rest of my experience, as the remainder of the evening began to feel like an unwanted exercise in audience punishment.) It’s a performance best presented as an Instagram carousel, though not one without its cute, literary pleasures.

seven methods of killing kylie jenner is in performance as part of the Under the Radar Festival through January 22, 2023 at the Public Theatre on Lafayette Street in New York City. Your Sexts are Shit: Older Better Letters has already completed its run. For tickets and more information, visit here.