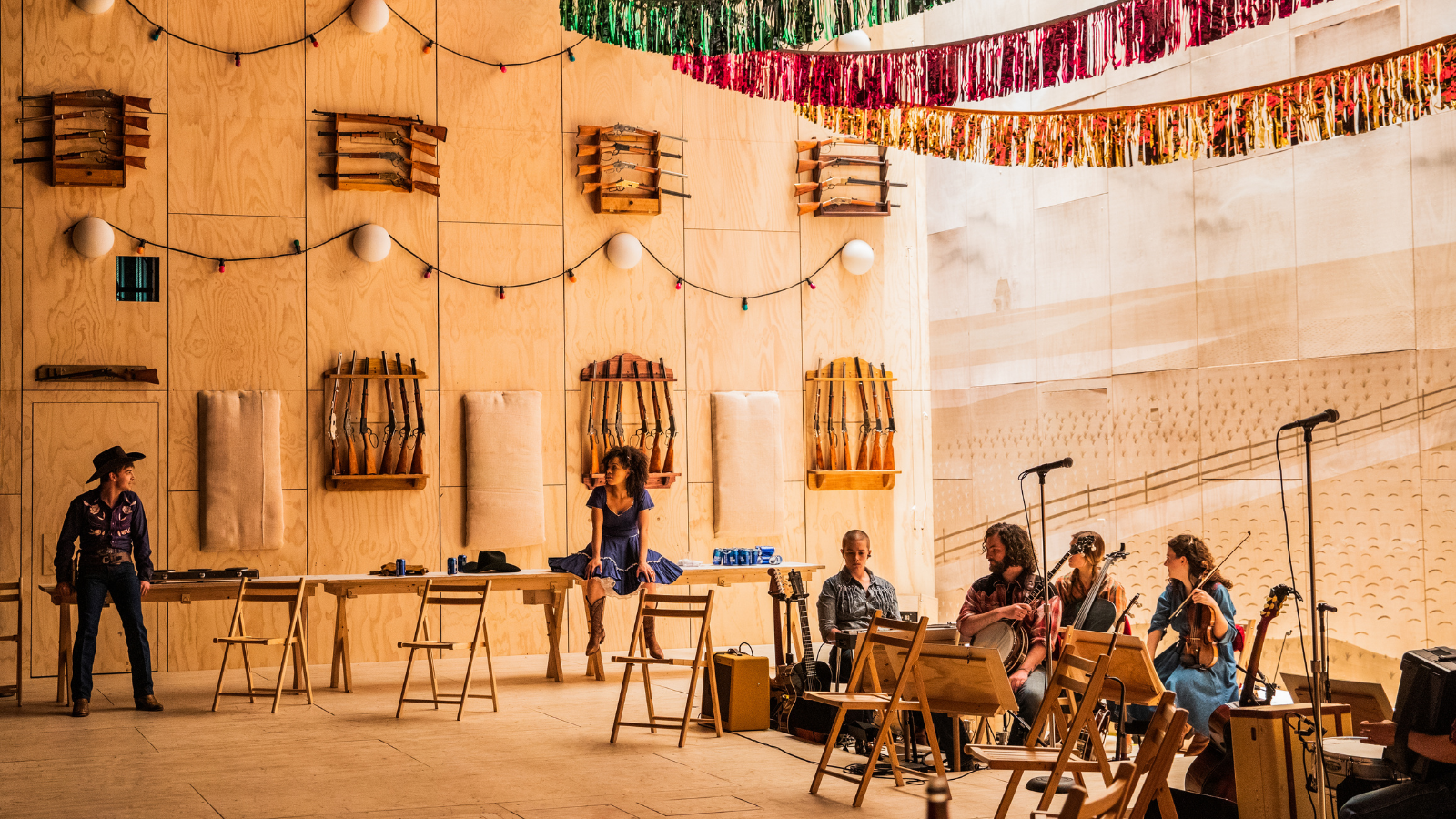 The company of Oklahoma! | Photo: Evan Zimmerman for MurphyMade

While the opening lyrics of Rodgers and Hammerstein’s Oklahoma! conjure up images of sunny skies, storm clouds loom on the horizon of this rural paradise. The national tour of the Tony-winning revival, now playing at Chicago’s CIBC Theatre, unflinchingly probes the musical’s darker themes of jealousy, power, and violence. Though interspersed with raucous humor and toe-tapping dance numbers, it’s the heavier subject matter that lingers after the curtain call.

In a barn-like interior, with whimsical sketches of farmsteads adorning the plywood backdrop, cast members mingle around picnic tables, preparing for a box social dance. While the musical is set in 1906, with Oklahoma on the verge of becoming a state, Terese Wadden’s costumes and Laura Jellinek’s set design offer a colorful modern take on the traditional western setting. The classic score also takes on new life in an orchestration for a seven-piece bluegrass band by Daniel Kluger.

The central romance between young farm woman Laurey Williams (Sasha Hutchings) and cowboy Curly McLain (Sean Grandillo) plays out with the band onstage and with other actors often milling about, whether or not they’re featured in a scene. This staging choice by director Daniel Fish emphasizes the close-knit nature of the community but also lends an uneasy feeling that characters are always being observed, even during intimate moments.

One such observer is Jud Fry (Christopher Bannow), a farmhand with a dark obsession for Laurey. Far from the burly, aggressive way that the role is often played, Bannow’s Jud comes across as a deeply depressed young man familiar with rejection — holding his lean frame with shoulders slumped and speaking in soft tones. When Laurey agrees to drive with Jud to the dance to make Curly jealous, the ensuing power struggle between the two men spirals into violence and tragedy.

Despite the unsettling actions of Jud, Curly is no hero in this production. Preying on Jud’s insecurities and stoking his dreams of revenge, Curly remains confident that his own handsome cowboy persona will get him out of any negative consequences to his actions. Laurey, who comes across not as a damsel in distress but rather as a woman aware of the gender power dynamics at play, does her best to navigate the treacherous situation and yet ends up shouldering much of the trauma.

Offering a glimpse into Laurey’s inner life amid this turmoil is the famous “Dream Ballet,” danced with passion and charisma by Gabrielle Hamilton. Opening with the sounds of a wailing electric guitar, the scene’s modern choreography by Agnes de Mille sends Hamilton leaping around the stage in bursts of energy against bright rock-show lighting designed by Scott Zielinski. In one striking moment of calm, Laurey — all dressed up for the box social dance — enters the stage and comes face to face with this wilder, freer image of herself.

Balancing out the darker themes of the show is a comedic love triangle between Ado Annie (Sis) — the girl who “cain’t say no” — and her two suitors, Will Parker (Hennessy Winkler) and Ali Hakim (Benj Mirman). While Will desperately wants to marry Ado Annie, Ali is equally eager to get out of an engagement arranged at the barrel of her father’s shotgun. The trio plays up the bawdy humor of their scenes, eliciting plenty of laughter from the audience on opening night.

Though it’s not all doom and gloom, this production exposes the darkness of human nature with bracing intensity: Jud’s disturbing disregard for Laurey’s autonomy, Curly’s cocky manipulation of Jud, and the community’s willingness to paper over an act of violence. All culminating in the jarring lyrics of the rollicking closing number, which proclaim “You're doin' fine, Oklahoma!,” when everything is all but fine for the traumatized young protagonist.

Oklahoma! is now in performance at Broadway In Chicago’s CIBC Theatre through January 23, 2022. For tickets and more information, and to see where else Oklahoma! will be visiting, visit here.