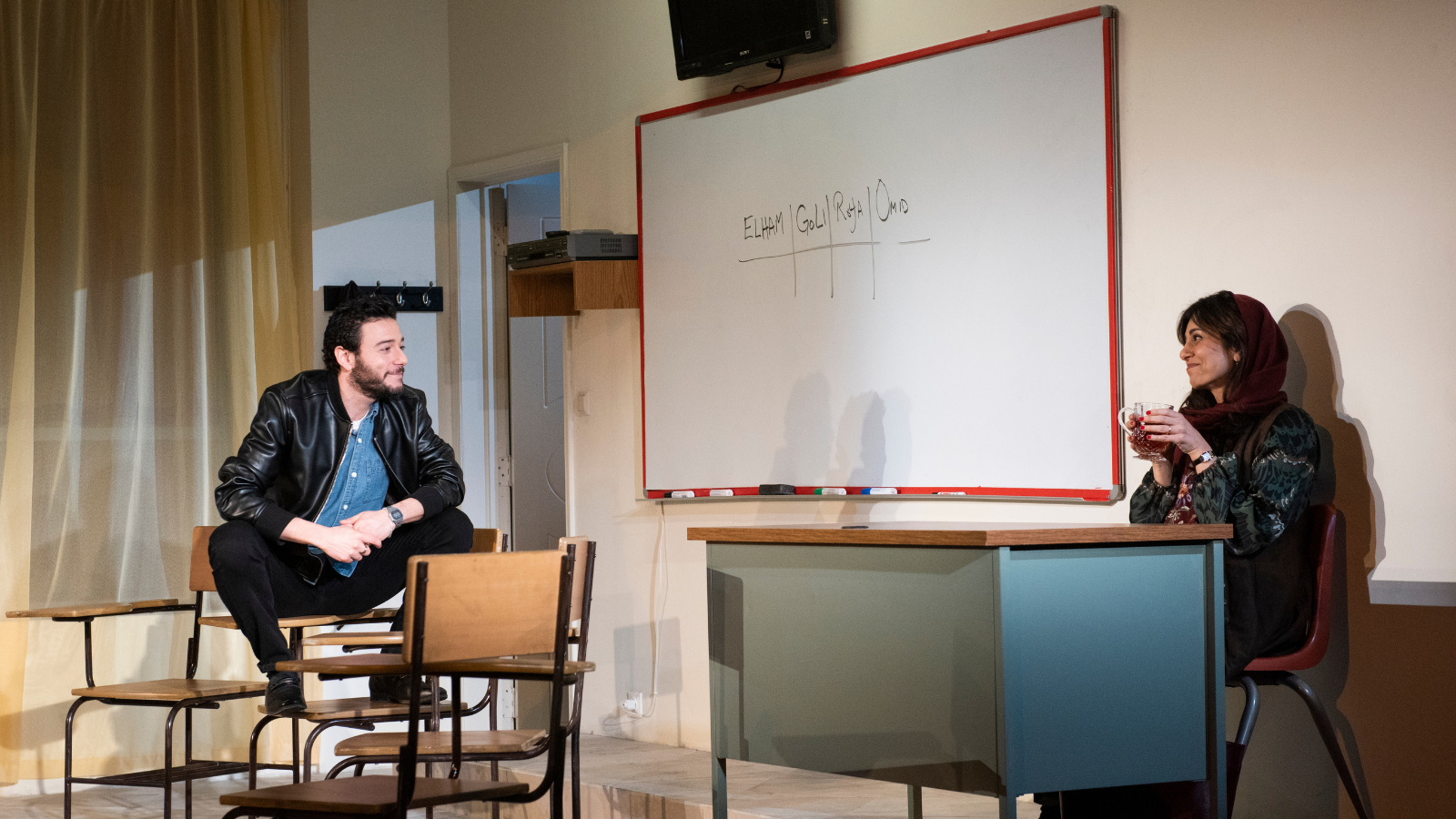 “In English, you won’t have redeeming qualities.”

So an Iranian medical student is warned during her most dreaded class: an adult course to prepare for the TOEFL, the Test of English as a Foreign Language, used for school admissions and immigration. Despite easily passing the MCAT and having, we’re assured, a lovely personality beyond the classroom walls (within which their own Farsi is forbidden), her English-speaking self is alienating to others, hostile to herself. For those who speak one language where others largely speak another, this schism is hard to explain but easy to recognize. As with all identity crises, the basic question is: “Who am I, why, and where?”

Sanaz Toossi’s moving new play, English, probes this problem with a sophisticated understanding of the failures of language, and of our own failures in relying so deeply on it for communication. Staged by the Atlantic Theater Company, in a co-production with Roundabout, the one-act work is a masterfully executed look at the impossibility of translating humanity through imperfect means.

In a single classroom in 2008, Marjan (Marjan Neshat) teaches a TOEFL class in Karaj after having spent some years abroad in the UK. Friendly and helpful, the wind is slowly taken from under her Mary Poppins perfection by constant clases with Elham (Tala Ashe), the medical student with a volatile temper, whose patience for learning the language stretches thin. The test is the only thing standing between her and a teaching position in Australia, much like it is the one obstacle keeping loving grandmother Roya (Pooya Mohseni) apart from her Canadian emigré son, who would prefer she not visit until she can speak English to her young granddaughter. Their precarious situations lead to a growing resentment towards the language, and to the idea of leaving behind an integral part of themselves and their culture.

Not all of the students in this course are set to leave their homeland. The younger ones — Omid, who boasts of his ability to acquire bootlegs of American films (and his knowledge of the word ‘bootleg’), and Goli, who prefers English because it “does not want to be poetry, like Farsi” — might go overseas, but are already sold on the dream. The West looms as large in their classroom as it does outside of it, where American schools have disappeared and English-branded Coca-Cola cans become novelties.

Imposed internationality plays differently across the characters, and Toossi’s writing makes perpetual maybe-emigrants out of each of them. Goli finds poetry in Shakira’s “Whenever, Wherever” (itself translated from the Colombian-Lebanese singer’s original Spanish); Omid has relatives living in the States; Marjan, herself, watches films like Notting Hill whenever not reminiscing about double-decker buses. The play reminds us that wherever you are, if the promised Hollywood glory of the Anglo cultural empire can reach you, you are subjected to being forever almost-there.

Toossi’s ingenious concept has the ensemble speak in heavily-accented English only when their characters are attempting their own rough translations, speaking ‘normally’ when communicating in Farsi. The actors inhabit this division pitch-perfectly, each performance revealing an essential truth about the emigrant experience without leaning into archetype. Roya, the play’s least vocal character, becomes its most haunting through Mohseni’s richly textured performance. Struggling to put the ‘mother’ back in her son’s mother tongue, she combines the weariness of age with the steeliness it affords. “He forgets where he’s from in English,” she says wistfully.

Lit beautifully by Reza Behjat’s warm lighting and scored by Sinan Refik Zafar’s gorgeous sound design, the production moves at a slow, confident pace that gives Toossi’s writing generous time to land before its Marsha Ginsberg’s turntable set revolves from scene to scene, and Knud Adams directs with a sharp eye for schoolroom silliness that can escalates into real-life tension.

Most modern migrant stories deal with immigration, what happens when the border is crossed and the dream possibly realized, but not many explore the anxieties of emigration. Not quite still here, definitely not yet there, emigrants exist in an unenviable limbo of uncertainties: “Will they take kindly to me? Will my way of being here translate to theirs, there? Am I making the right choice? Do I even have one?” To stage the questions asked by those who might never answer them might not seem the most obvious dramatic choice, but Toossi finds the pulsing life behind each one, imbuing what might seem like silly classroom activities with the existential threat of being left behind.

Diving into these concerns skillfully, Toossi gives her characters moments of great eloquence as they cope with the responsibility of having to convey them. Her first of two this New York season, English is an outstanding play that compellingly examines the weight of language on those burdened with carrying more than one, and the difficulty of communicating yourself to a changing world.