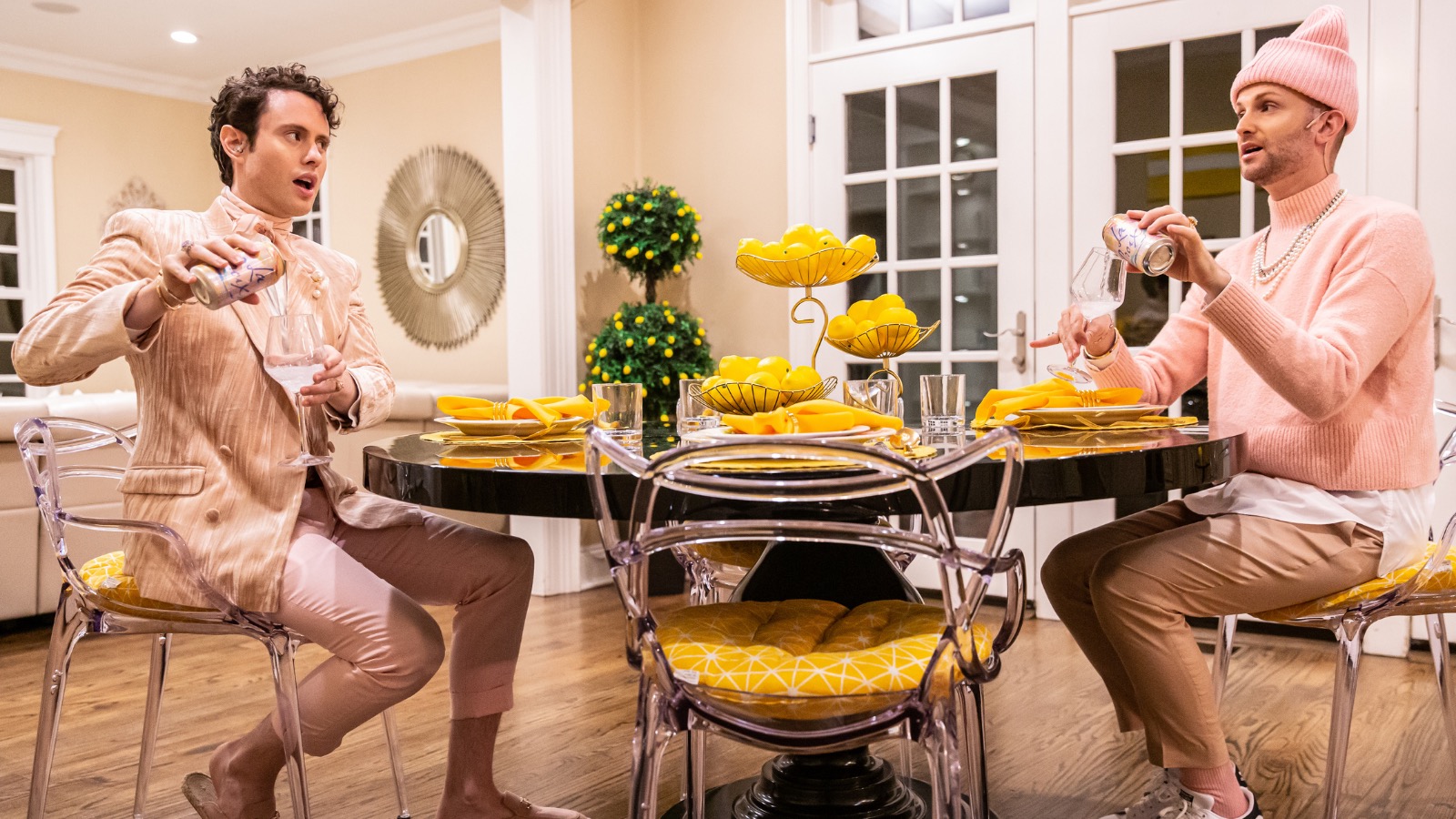 We are escorted into a Carroll-esque McMansion funhouse of camp, color, confession, and (yasss) queens.  As the madness, framed in the style of reality television, unfolds, our “curiouser and curiouser” fascination with this Wonderland and its myriad of characters wields itself as a prod to explore the very definition of reality.   Is it all a dream?  Or is any of it real?  What is real, anyway?

In this high-energy and highly engaging live-streamed production directed by Rory Pelsue, Fake Friends has taken a vivid and in-depth approach to prompt the idea of performativity versus reality using Bravo’s Real Housewives franchise as inspiration.  The content of This American Wife, which has been developed and adapted from a handful of previous iterations, consists of original scripted material, improvisation, and, most prominently, recreations of moments from various episodes of Housewives.

Fake Friends is a Brooklyn-based collective led by Michael Breslin and Patrick Foley, who have co-created, and are performers, in the piece.  Core members of the collective, Cat Rodríguez and Ariel Sibert, serve as dramaturgs, whose dissection and research into the psychological fascination and ideology of reality TV and the Housewives is evident both in the structure of the material and with the abstract and surrealist spectacle of the production.

The story revolves around three male-identifying characters, all sharing a love for the Housewives, dissolving into the tropes of the series in a mansion located “somewhere between New Jersey and Beverly Hills”.  After freely immersing themselves in the world they’ve watched on a television screen, reliving scenes and embodying the women that they have been mesmerized by, the cameras start to turn on the trio where they are sitting inside the nefarious world against themselves and each other.  Or so it seems.  From confessional segments to a final act in the style of a reunion special, the high octane thrill of sitting at home and watching this unfold is the result of a well-structured paralleled theatrical experience.

Without much knowledge of the reality series upon which it’s based, This American Wife could quickly go over anyone’s head within its first few minutes.  Think of it as if the cast (consisting of Breslin and Foley and Jakeem Dante Powell, most recently seen in Broadway’s Slave Play, plus an uncredited abstract figure known as “The Wife”) is attempting to toss a drink in your face, ala Housewives naturally, but you have the impulse to try to duck and cover.  However, the media’s exposure and openness to general concepts and ideas of supposed “reality TV” is just enough to trust the vision of Fake Friends that we should just sit back and be doused by their inventiveness.

Fresh off of their successful live-streamed production of “Circle Jerk”, Fake Friends, and producers Jeremy O. Harris (Tony-nominated playwright of Slave Play) and Fourth Wall Theatrical, have created an experimental and site-specific piece that successfully pulls off and sports its technical prowess throughout the entirety of its 90-minutes.

In the final act of the performance, questions from the audience are taken via Twitter.  And in the spirit of turning reality television into event television, the audience and cast members interacted virtually in real time, answering questions and leading to a conclusion after a cast member leaves the set.  This is among the parallels of other Housewives moments, examples include usually the women running off to other parts of the house for some semblance of privacy or the exposing of cameramen and crew, as a tactic of capturing candidness.  Is it an image of, or actual, candidness?  The whole point is that the audience is confronted with the notion of what should be considered (or perceived as) reality.

As wild and whimsical, and at some points confusing without prior knowledge of specific Housewife culture, as the production is, the satirizing of the Housewives series provides an interesting gateway into the fascination of perception and reality.  And This American Wife chooses well by not doing its audience a disservice by attempting to spoon feed and answer these thought-provoking questions and ideas directly.

The last image we are left with onscreen is “The Wife’s” claws - erm, hands - shutting the door of the mansion.  The hands are embellished with colorful fake nails.  And beneath all of that artifice is a human hand; wrinkled, raw, and - indubitably - real.  How often do we intentionally attract and present attention to falseness?

“This American Wife” will have live-streamed performances through May 29.  An additional option of on-demand viewing of a pre-recorded performance will be available from May 30 to June 6.  For more information, visit here.