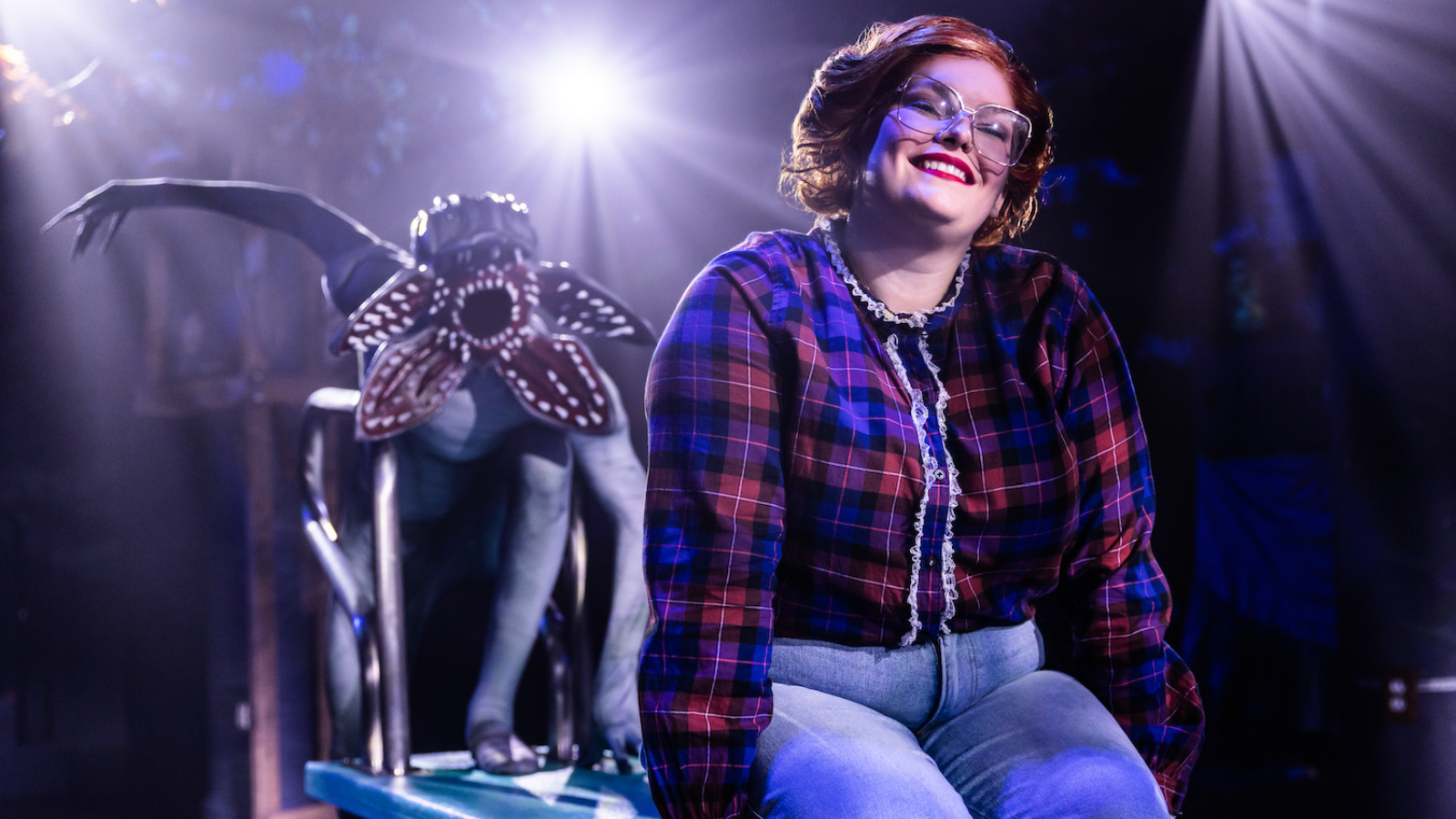 A portal to the Upside Down has opened in Playhouse 46 at St. Luke’s Off-Broadway. The comedy mostly hits the right notes, with a smart book by Jonathan Hogue that focuses on Season 1 of Stranger Things, allowing the story to stay mostly contained while exploring potential character arcs left untapped by the Duffer Brothers. While it is mostly a fan-service show, those deviations are the best part, allowing an entry point for people who might not have seen the show before (although a primer would be useful for complete noobs).

Another highlight is having Will Byers, the boy whose disappearance kicked off the entire series, be a puppet. Caroline Huerta does great work making the character feel like a part of the human cast, imbuing the character’s oh-gee-why-me-where-am-I? whininess to shine through without poking fun at Will’s on-screen portrayer. Sadly, the same can’t be said about Joyce, also played by Huerta, with too many jokes suggesting something is up with Winona Ryder. There’s a misguided attempt at humor with the song “Crazy,” excellent as the Beetlejuice, Heathers, etc., references and Emmy jokes are.

Of course, as a parody, Stranger Sings can’t actually stray too far from the plot. From calling out the lack of queer representation to Jonathan’s creepy photography to the Demogorgon’s dance break, most of the laughs throughout the evening feel earned from the source matieral.

The score, also by Hogue, keeps the momentum going, even if the songs follow a bit too closely to musical theatre boilerplate. Each character or group gets a major season plot point turned into a number: the main Hawkins trio (Jeffrey Laughrun as Mike, Jeremiah Garcia as Dustin, and Jamir Brown as Lucas) want to find their missing friend and go on adventure; Eleven (Harley Seger, also playing Nancy) wants a real dad, etc. Shawn Smith as Detective Hopper gets to chew some scenery as the man-about-town who finds himself dealing with too many children and deadly creatures. Garrett Poladian, playing Steve Harrington/Jonathan Byers/Dr. Brenner, deftly switches between characters.

The show is returning following an Off-Broadway run in 2021 with some obvious revamps. For example, “Running Up That Hill” makes a cameo appearance that could only have been added after Season 4 of Stranger Things dropped earlier this year. There’s also a few references to Season 3 plots and characters—none of which drive the story forward, which is probably for the best, but a fun inclusion nonetheless.

Having not seen the original staging, I’m not sure if in-the-round is the best format for the show’s presentation (too many times, I saw the backs of performers) but it does allow for a fully immersive, moving set design, with Christmas lights, dangling vines, and a diving board. The costumes do the best work of paying tribute to the show’s original look and feel. The wigs, it needs to be noted, leave something to be desired. Still, this is a parody, so maybe that’s on purpose.

For Stranger Things fans, this musical will surely scratch the itch as we wait for Season 5. Newcomers might be a little nonplussed but this fun night out will be around for years to come, and that’s a good thing.

Tickets for Stranger Sings: The Parody Musical are currently available through January 1, 2023, at Playhouse 46 at St. Luke’s in New York City. For tickets and more information, visit here.