Getting Personal with Amber Iman 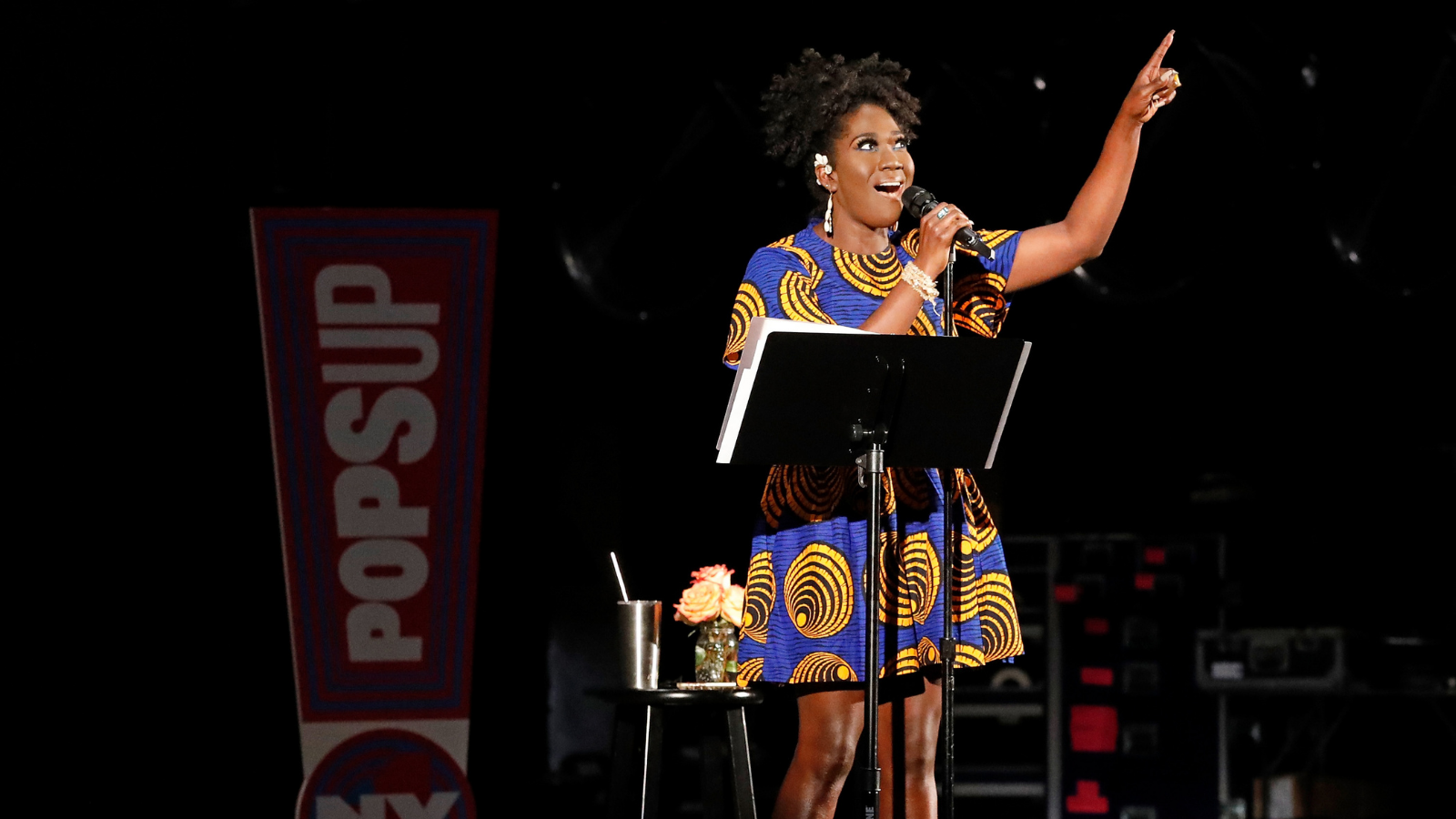 About midway through the first night of her Feinstein’s/54 Below residency, Amber Iman, a performer perhaps best known for her roles in Shuffle Along and Hamilton, said she “hates musical theatre, but loves not being homeless.” She was (sort of) kidding but, with a setlist that barely even touched the Broadway songbook, proved her talents brighter than a midtown marquee.

Backed by musical director Michael O. Mitchell, drummer Jaylen Petinaud, and bassist Andre Cleghorn, she tore through singular covers of everything from Erykah Badu to Miley Cyrus, Sondheim to Anita Baker––stating she would be singing what she wanted, not what she is expected, to sing. Guiding the audience through a drinking game involving taking a sip whenever she mentioned her therapist, the singer was spectacularly candid with her presence, and generous with her talent.

Luckily, she brought that same intimacy to a phone conversation with me the morning after. Our conversation has been edited for length and clarity.

How long did it take to put the show together?

I started assembling the songs in the last week or so, but the banter and all the stories... I honestly wrote that on Monday. I had a really great therapy session where we were talking about joy––and that session was on Monday. I’m not even lying. My therapist knew how stressed I was before the shows and she charged me with enjoying myself and told me to stop unnecessarily stressing and overwhelming myself. She was like, “You deserve to enjoy this. What if we try for joy?” That sparked the idea of standing in joy as the theme for my show.

About that banter––I don't even want to call it intimate because it’s beyond that––it was so honestly, just shockingly, personal. I'm wondering how much you plan for that? Because there were moments where you truly seemed taken by what you were sharing.

I don't write out what I'm going to say, so sometimes I'm shocked by what comes out of my mouth. I don't know how to not be honest, you know? That's just who I am––as a person, as an artist, that's just my personality. I remember when I first moved to New York, in 2012, I was struggling. It was January, first of all, in the middle of a blizzard, and it was hell. I was literally looking on Facebook for the “I just moved to New York” support groups but nobody was talking about how hard it is to live here. And I thought I was the only person struggling. It took me a while to realize that everybody’s struggling, but nobody wants you to know and, to me, that was so lonely.

So I just started being honest. I thought I should be the thing that I needed to see––which is somebody who is honest about how hard this shit is. I can't get up on stage and just sing a bunch of songs––you can sit at home and watch me on YouTube for that. If people are going to spend their money and come out to spend an evening with me, I feel like I owe it to them to at least be honest and share what I'm going through. Because, to me, that's what makes it a full experience.

And, last night, that created such a beautiful back-and-forth with everyone. Do you like having that sort of conversation with your crowd?

I do. I think it's people feeling like they got something. I always want people to feel like they got their money's worth––that they didn’t just for the scallops and the steak. I hope people are able to take something with them, and that it gives them something to think about, something to challenge themselves to do, or something they can share with someone in their lives.

You also start these great musical conversations between your band and the audience, especially between songs. There was one moment after you sang “Sweet Love”––

[Laughs, acknowledging the fact that, after that song, the band caught a wave, she started dancing, and the audience rose to its feet to join] Mhmm.

So, like, what happened there? Because the energy just completely shifted.

That was nothing else but us being present with each other. It’s not anything I can describe, or even explain, it's literally just the energy. The lyrics move you right away. And when I hear Michael, Jaylen, or Andre playing something and I tap into that––it's literally all communication and just listening and responding. Yeah. And we are somehow all on the same page that we know something about to happen and we just let it happen.

It reminded me of the craziest jazz performances––have you sung a lot of jazz before?

I am influenced by jazz, and I'm a fan of jazz, but I'm such a fan of musicianship that I don't ever claim to be a jazz singer because, to me, that has to be completely studied as an art. I'm a student of jazz, R&B, neo-soul––those are my roots, not musical theater. So anything I do, even “Party in the USA,” or anything I cover, will always have those roots because that's the language I speak.

I don't think I've ever heard “Party in the USA” like that. It would be one thing to just say, “OK, I'm going to do a jazz version of this,” but you really took it through jazz, pop, there was some dancehall in there––how? What made you say, “I'm going to swing this song eight different ways and somehow it's going to work?”

Over the years, Michael and I have crafted that version into what it is now, but I’ve never aimed to fit a cover into a genre. Like, I've always heard “I Want to Dance with Somebody” as a prayer, so we didn't go into that one with the idea of creating a certain genre sound, it was just a prayer. It’s always about what I intend for the audience to experience. My “Party in the USA” would be my kind of party, so it will have a little soca, a little dancehall, and be a little funky. I approach the music through the intention and the storytelling.

I always thought of that song as an affirmation––“I know I’m gonna be alright”––and that's kind of the tone you set with the theme of standing in joy. With the “Black-ass Medley” [a lively mashup of Black songs she has so titled], for example, were those songs you always wanted to sing?

I have been so lifted by black women and black music, especially lately. I've been watching performances that have helped free me and give me permission to be free. I needed to do something that brings black women and music into the space. “On & On,” by Erykah Badu, has always been a vibe, so that and Solange were the basis for this medley. Those two women exemplify black freedom for me, and I just started thinking through my Rolodex of songs I could work in. I was born and raised in Georgia, so I had to get some Outkast in, for the culture, and it all came together.

I'm curious as to why you chose “Move On” from Sunday in the Park with George as one of two theatre songs in the show. Is Dot a role you’d like to play or see yourself in?

No, I don't see myself in that role, I'm not really interested in that. We’re seeing a lot of folks who really want to take shows that are written for white people, or white voices, and do an all-Black cast or something. I've never been interested in that. I would rather be in a room with Black artists creating Black stories with Black people involved from the get-go. Not, “We've done three workshops and now we're on Broadway and need to diversify.”

You seem to have so much fun when you're singing but, at the same time, technically, it's on. How strict are you with your interpretations?

There's no strictness involved. I'm always aiming to be a better musician, and I’m always just trying to listen––to listen, to be free, to not judge it to be present. If Michael plays something that is left, and I was thinking about going right, I'm going left. That’s why I surround myself with great musicians who I feel are better than me because I can learn so much. With this show, I only had one day of rehearsal. I don't do it a million times because I don't want to lock myself in. Whatever happens, happens because that was what was supposed to happen in that moment. So Thursday, when I go back, I’ll be starting from scratch. It's starting over. I'm trying to take a step forward.

Amber’s residency at Feinstein’s/54 Below plays through August 14. For tickets and more information, visit here.