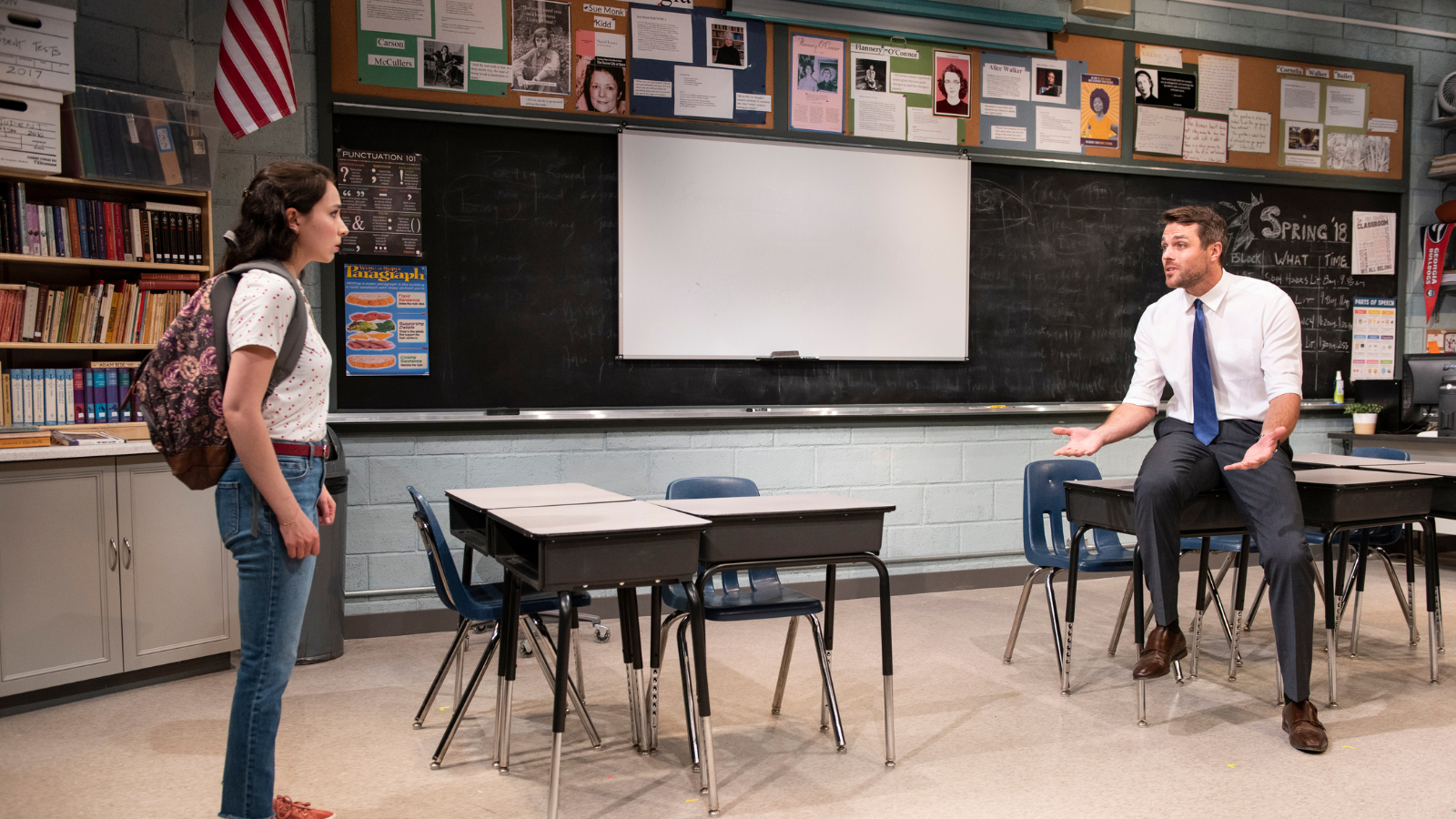 The company of John Proctor is the Villain | Photo: Margot Schulman

It’s hard to represent my generation accurately. We were born around the start of the new millennium and came of age in the 2010s, so we’ve gone through some tough shit. I can mark key adolescent moments in my lifetime onto horrifying world events. I went to my first Pride festival in D.C. the day before the 2016 Orlando Pulse shooting; I started college in 2017 the week after white supremacists murdered Heather Heyer in my home state; I directed a musical in 2018 as Dr. Christine Blasey Ford testified on sexual assault to a Senate Judiciary Committee; I finished college in 2021 only a few months after the January 6th Capitol insurrection.

Writers have tried, mostly in vain, to capture what it’s like to become an adult as the adult world is quickly unraveling. Films like Booksmart or Unpregnant want us to laugh at the foibles of White Feminist women, while consistently underselling the pressures they’re under and the damage they perpetrate. On television, shows like Euphoria and Gossip Girl glamorize a Gen Z hyper-reality, where trauma is heightened through stunning cinematography until the shows deracinate many teenagers’ lived experience.

So I don’t say it lightly when I say that John Proctor is the Villain, making its world premiere at Washington D.C.’s newly-renovated Studio Theatre, is the play I’ve been waiting for. This is the rare piece of media that actually gets Gen Z right, exposing the generosity and cruelty of my generation without feeling sentimental nor hyperbolic. The play’s probably the most accurate depiction of my friend group’s experience growing up in the unstable, violent, and still somehow ecstatic late 2010s. But beyond that, John Proctor is the Villain an incisive examination of the sexual politics of recent history, with a top-notch cast giving electric performances.

Like in The Crucible itself, there’s trouble going on in this isolated town, and the town’s young women are yearning to make sense of it all. In the midst of sexual assault allegations both locally and nationally, Beth recruits the other young women in her classroom to create a Feminism Club. This all concerns Miss Gallagher (Lida Maria Benson, fantastic in her supporting role) who acknowledges that the school community may not be ready for these conversations to happen so openly. With the help of Mr. Smith, the club continues to meet. But trouble comes to the club once sexual assault allegations start popping up for Ivy’s father, and once Shelby (Juliana Sass) finally returns to school after a mysterious months-long absence.

The breadth, specificity, and sheer hilariousness of Kimberly Bellflower’s writing is impressive. Her ear for the rambunctious energy (yet occasionally startling intelligence) of teenagers is pitch-perfect. Laugh-out-loud and holy-shit moments come quickly and often in this snappy play, which revels in the gray area between dark humor and tragedy.

But Bellflower also hones in on language itself, and the ramifications words have on young womens’ bodies. For example, the #MeToo movement is only mentioned in euphemisms by the adults in the play; it’s referred to time and time again as just “everything that’s been going on.” The teens are the only ones willing to find words to express the brutality of the situation, but this also leaves them eventually grasping at the limits of language as well. Eventually, many young characters defer to calling things “everything that’s been going on” as shorthand for personally painful experiences they can’t bring themselves to name.

If there’s one language that unites the characters, it’s that of culture. The Feminist Club can’t say enough good things about Taylor Swift and Lorde, my generation’s patron saints of reckless youth. But they’re also skilled readers, referencing Chimamanda Ngozi Adichie, Joan Didion, and F. Scott Fitzgerald. Pop culture is one of the only things that unites all the characters in the show; sometimes it’s easier to use films and literature to discuss dark topics metaphorically than literally.

Which is also what happens with The Crucible, albeit in a different way. These young womens’ cultural literacy allows them to become critics of the best kind: ones that use criticism not to spite harmful material, but to reveal their own heartbreak. The students’ argument is that John Proctor, the hero of The Crucible lauded for his ability to overcome his past affairs with young women, is actually the villain of the piece. It’s a shrewd interpretation of The Crucible based upon a close-reading of the text, and the cast gamely tackles Bellflower’s argument with passion and naivete simultaneously.

Particularly wonderful are the two female leads in this production. As Raelynn, Slattery embodies a young woman on the verge of self-revelation perfectly, and her comic timing couldn’t be better. As Shelby, Sass depicts a young woman’s mental health troubles with sensitivity, understanding the delirious humor to be mined from her character’s situation. Props also has to be given to director Marti Lyons, for finding moments of introspection for all of the show’s large cast.

This production’s grappling with such intense material comes with some flaws. By casting the Asian actress Resa Mishina as Ivy, this production asks us to consider sexual assault and masculinity within the Asian American community, something that Bellflower’s script doesn’t address. John Proctor is the Villain is also a long play, one that asks so many tricky questions while acknowledging that there are no answers. This is the rare instance where I wondered if the sheer scope of the material would be better served in a serialized narrative, where some supporting characters would have a chance to be more fully realized.

Yet the show’s questioning of the heroes that define our culture couldn’t come at a more opportune time (given the Supreme Court’s breakdown of womens’ reproductive rights), or in a better place. Washington D.C. is a city that, like many of the older characters in the show, fashions itself as progressive but can’t follow through in protecting the rights of the women under its institutional power.

It will be up to my generation, and the young women who define it, to challenge these power structures and create their own power. Bellflower understands these dynamics, and crystallizes the way in which power is messily negotiated between generations in her play. In this, she gets at something crucial about Gen Z: we may be yearning for power, but it only comes out of a desperate helplessness at the state of the world right now. Our search for social capital might really be about finding connection and love in a world falling apart.

John Proctor is the Villain is playing at Washington D.C.’s Studio Theatre through June 12. For tickets and more information, visit here.