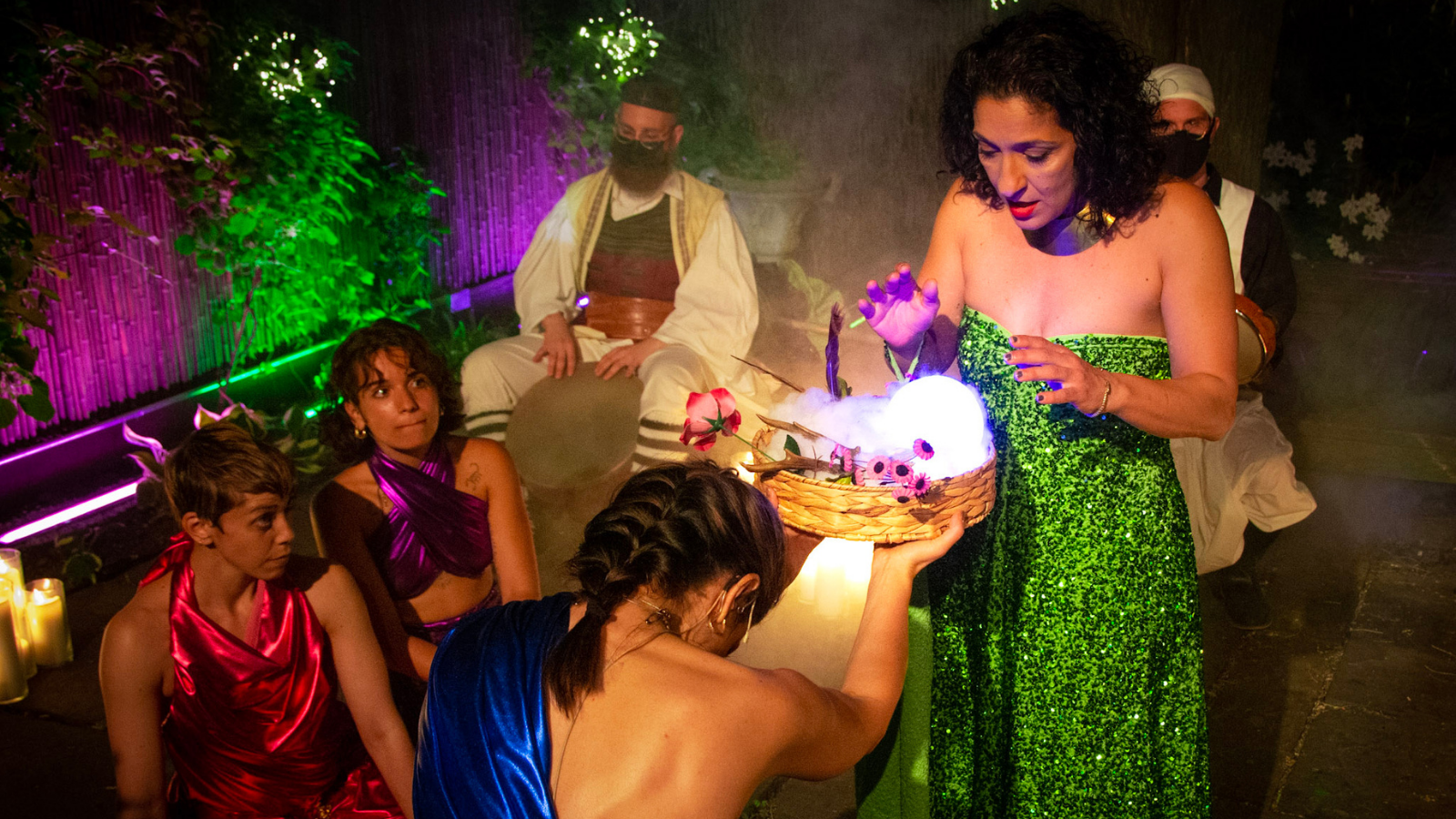 Photo: Catharine Krebs
By
Juan A. Ramirez
No items found.
on
Category:
Reviews

Once your hands are ceremoniously washed and you find your place around the young woman writhing on sand, it’s easy to sink into a comfortable lull. The live music is a welcome respite from a year of AirPods, the performers slink about in hypnotic twirls, and the real estate extravaganza of a Chelsea brownstone with high ceilings and a large backyard is enough to create its own type of high. This is pretty much it in Persou, though. Mounted by the One Whale’s Tale company and housed at the Cell Theatre, it has the enjoyable edge of being one of the first in-person, immersive live productions happening in New York, but none of the Greek catharsis it promises.

Co-created by Ellpetha Tsivicos (who also directs) and Camilo Quiroz-Vazquez (credited as the production’s writer), Persou is a half-baked celebration of spring and all its delights. A loose plot follow the goddess Demeter (Ionna Katsarou) as she tries to rescue her daughter Persephone (Katherine Hreib), stuck in Hades until springtime, by convincing Circe (Anthoula Katsimatides) to wipe out winter, once and for all.

There’s a cute “COVID’s over!” vibe to the story that’s hard not to smile with, and Katsimatides’ comedy as Circe won most over—even if the ‘90s stand-up of it all made me want to plan an outdoor screening of Disney’s Hercules—and as a master-of-ceremonies, Tsivicos is charming enough. But there’s a disjointed, pseudo-leftist democratization to the piece that never gels: guests are instructed to wander and “take up space,” but there’s nothing to see; performers use their own voices, leading some to sound authentically Mediterranean, and others the most American you’ve ever heard; the goal of ‘immersion’ is evident, but all remains pretty surface-level.

As wine, halloumi, and olives were served as the audience was ushered into the space’s well-appointed patio (Kendra Eaves, doing double-duty on set design and art direction), I found myself wondering when the rest of the meal would arrive. It then clicked that Persou might make a delightful immersive dining experience – the kind where costumed waiters act out menus and a floor show gets thunderous applause from a bacchanalian crowd. As it stands now, there’s not enough to chew on, dramatically or otherwise, but I certainly got some summer moodboard ideas.