In Arena Stage’s CHANGE AGENT, Women Shape the Past (and Future) of America — Review 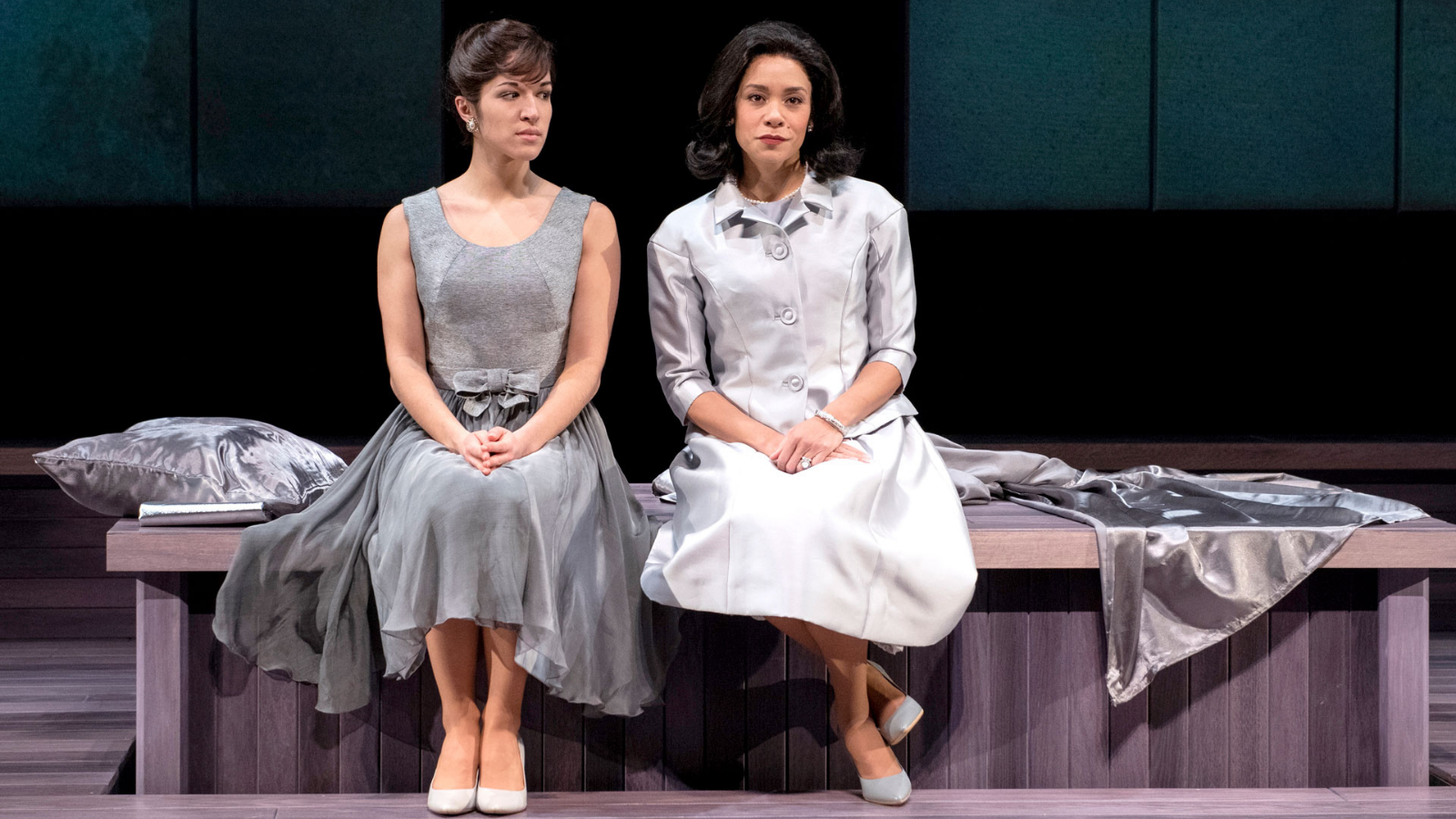 Near the beginning of Change Agent, now playing at Washington D.C.’s Arena Stage, a young woman shares her artwork with a friend only to receive some critical feedback. “The ways / you feel about the world, my god it’s got / to go here,” the friend says. “Listen for the future you, / and what that is, the you you can’t quite see / yet… find… here?”

That advice—encouraging, prophetic, enigmatic, and ambitious—provides a sort of mission statement for the characters in the show, and for the show’s writer-director Craig Lucas. Change Agent isn’t afraid to explicitly say how it feels about America’s past history. But the show also becomes a metatheatrical look on what it takes to stage history at all, when we can’t always hear our future selves.

The young woman artist receiving this advice is Mary Pinchot Meyer (Andrea Abello). To many people, she’s probably known as just one of President John F. Kennedy’s many mistresses who was mysteriously killed in 1964. But we start the show in her teenage years in 1936, where her wit and intelligence prove alluring to a young John “Jack” Kennedy (played with charm by Luis Vega). The show quickly moves forward in time with each scene, with each character struggling to balance their political and romantic lives. Soon Mary is married to Cord Meyer (Jeffrey Omura) and Jack’s married to Jaqueline “Jackie” Onassis (Kathryn Tkel, bringing some knowing sharpness along with the well-known Onassis accent). Meyer also continues to find counsel in Cicely d’Autremont (Regan Linton), a college friend who’s also raising her family in the midst of D.C. politics.

If this all sounds like a lot to keep track of, don’t worry. While Change Agent covers a lot of historical ground, it’s certainly not a Wikipedia entry of the 20th century. By making Mary Pinchot Meyer the show’s protagonist, Lucas taps into the interpersonal longing at the center of the time period’s major political arguments. When Cord defends his censoring of the press and media through the CIA, he isn’t just defending American interventionism; he’s also fashioning himself as a hero to his wife. When Mary encourages a now-President Kennedy to reach out to Nikita Khruschchev to de-escalate Cold War tensions, she’s not just advocating for diplomacy; she’s trying to make her lover translate his private tenderness into his public life.

As Mary, Abello does an excellent job at making us understand her character’s fierce determination to hold onto the ideals of justice and transparency, even as her husband and lover are the ones who ultimately hold the power of political office. Abello’s ability to move effortlessly from sly repartee to contemplative monologue is impressive. Her rhetorical skill is only matched in this production by Tkel, whose shrewd take on “Jackie” imbues her character with a deft verve, but also a melancholic awareness of her husband’s infidelity.

In the 1960s, it was commonly said that “behind every great man there is a great woman.” But Change Agent dives deeper into this platitude, exploring how many powerful ideas from women have been denied by their male counterparts—even by the men these women love.

It’s no accident that both Mary and Jackie are played by women of color. Change Agent’s script denotes that the characters in the show “meet again as souls in the afterlife,” and that the actors “want to represent a breadth of humanity.” Thus, there’s a racially diverse cast of actors in this ensemble. Having Vega, a Puerto Rican man, play President Kennedy takes on pointed resonance when characters call out Kennedy’s inefficiency in forwarding Civil Rights legislation.

Still, there are moments where Lucas’s script falls short in exploring race in the 1960s—arguably the most political subject of the time. Change Agent mentions two Black people as they intersect with Mary’s story: the first Black man hired to the Secret Service, and the Black man accused of killing Mary. However, their actual names (Abraham Bolden and Raymond Crump, respectively) are only briefly mentioned, and the revolutionary Black lawyer who defended Crump, Dovey Johnson Roundtree, is never discussed. Change Agent mostly has its white, rich characters acknowledging their wealth and whiteness, without actually challenging these power structures or telling the stories of people of color.

Where Lucas’s script does soar is in quiet moments of lyricism. While many of the scenes take place in suburbia or in the Georgetown neighborhood, the characters understand the horrors of WWII that make America’s tenuously peaceful existence possible. “You can’t know if you weren’t there,” Jackie says, in a hauntingly beautiful monologue about the Hiroshima and Nagasaki nuclear bombings. “...a human being, pausing / to inhale a breath of summer, turned to ash, / an imprint on the ground where they just stood.” It’s these quick asides to the audience, full of visceral language, that reveal Lucas’s true interests beyond creating a Mary Pichot Meyer biopic. What does the future owe to the past? Or what does the past owe to the future?

There are no answers to these questions, and part of the joy of Change Agent is watching the characters grapple with these questions in real time. We watch Mary struggle to follow her friend’s advice and listen to the “future you,” until she becomes old enough to want to listen to her past self.

So it’s fascinating, but a little disappointing, to see Lucas try to solve these questions more explicitly. Towards the end of the show, those quick asides become full metatheatrical scenes addressed to the audience, positing the theatre art form itself as the place where the past and future intersect, and condemning the current state of American politics. Cha See’s exquisite lighting design heightens these scenes, but I was still left feeling a little skeptical of Lucas stating the salvational power of the very artform I was witnessing.

It’s here where Lucas seems to go against the argument he was building before: mainly, that there is no perfect mediator between the past and future, meaning we must strive to change the future while knowing it might all be for nothing. Like Mary, I’m still trying to hear my future self to see whether or not this play—or the theatre art form itself—can initiate real change in the world. I sure hope it does. I hope to live long enough to become my future self and find out.