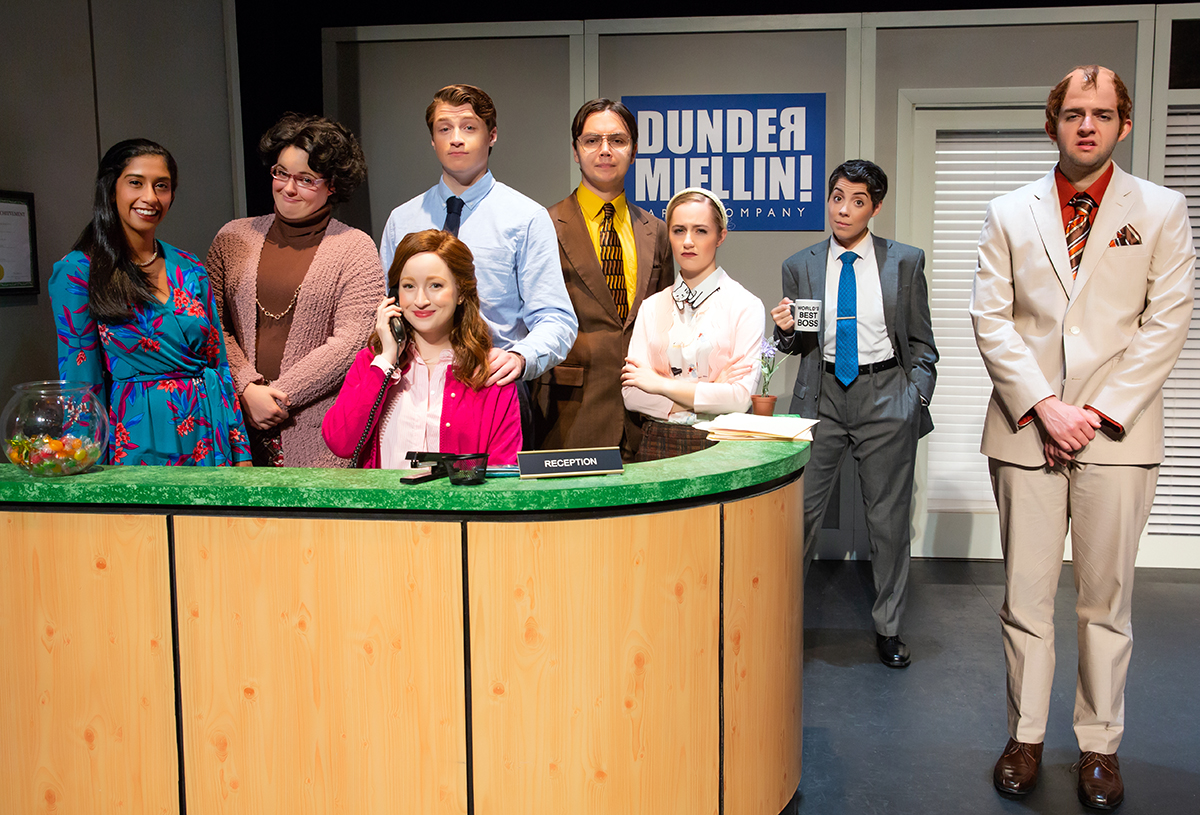 Cast of The Office! A Musical Parody | Photo: Jeremy Daniels
By
Kobi Kassal
No items found.
on
Category:
Features

Theatre Talk Boston (henceforth TTB) caught up with Christian Fary, who plays Dwight in The Office! A Musical Parody which opens tonight at the Calderwood Pavilion at the BCA and plays until December 1. Read below to see how Christian found his own Dwight, performing in Scranton, and so much more!

TTB: So, tell me about The Office! A Musical Parody!

Christian: Sure! The best way that I know to describe The Office! A Musical Parody would be as a love letter to the TV show. The writers, Bob and Tobly McSmith, are huge huge huge Office fans, and they really took the time to craft something that really just shows you what The Office means to so many people and all of the love and the laughs that it gave us over the nine seasons. So, it really is just a love letter wrapped up in a great little comedic parody package.

TTB: And you play Dwight, of course made famous by Rainn Wilson....

Christian: Yep! Dwight is such a huge character from the show. He is such a pop culture icon that I really wanted to give homage to what Rainn Wilson did with his character. I also want to sort of give him a little bit of Christian as well, you know? I had to dive into the mind of Dwight Schrute–and you know it really just, for me, it boiled down to his commitment to the company and his commitment to his co-workers. His commitment just manifests itself in a way that maybe most people wouldn't manifest their commitment. I really just tried to pay homage to what Rainn did and what people loved so much about Dwight and about the show.

TTB: Going off that... during the rehearsal process did you all really zero-in on the television show or did you want to craft your own character?

Christian: I can speak to my process best of all, but before we got in the room in New York I really made sure that I had watched through all nine seasons again–really done a lot of close watching of what Rainn Wilson did throughout the whole show to look for any sort of physicality or maybe vocal inflections or things that he did that are just very iconic and really stick out. Once we got in the room with blocking and choreography–I tried to incorporate that into this character. Then of course I gave it my own little spin but it's actually really great having the show. It's sort of a reference point that we can go back to all the time–when we're feeling sort of lost or maybe we want to reconnect a little bit more. For me, I have really used the TV show as sort of an anchor for all of the work that I've done.

TTB: Do I need to be a fan of the show to come watch and enjoy this?

Christian: I think that anyone can enjoy this show. There are some jokes that are obviously more deep-cut and more geared towards the fans and the super fans, but I think it lives in the world of musical comedy. I really think that anyone would have a great time in the show for sure, for sure!

TTB: Talk to me about touring and performing the show in Scranton!

Christian: We as a cast have really grown close on the tour because we're with each other 24/7, seven days a week. Touring has been really incredible, just seeing parts of the U.S. that I wouldn't normally go see and opening in Scranton was amazing! I mean–talk about some super fans. Scranton was just–it was really magical.  It's the home of Dunder Mifflin so it was just a truly crazy experience.

TTB: I was going to ask about that–how are the fans reacting when they come to see the show?

Christian: It's one of my favorite things about doing this show is sort of catching the audience catch jokes or catch lines that we say and watching them remember a part of the different episodes. Seeing the t-shirts and the costumes that people come dressed up in–it's so much fun. It really just shows how much everybody loves this show and it gives us great energy onstage and motivates us to do a great job every night at a show.

TTB: And you all have a sit down for almost a month here in Boston–have you ever been before?

Christian: I have never been to Boston, so I am very, very excited. We all have made lists of things that we want to try and things that we want to do all over the country and my Boston list in particular is pretty extensive so I'm pretty excited to get there and explore Boston and all that it has to offer! I am so excited for Boston audiences to come see the show and have just as much fun as we do performing it every night!

‘The Office! A Musical Parody’ plays at the Calderwood Pavilion until December 1. Tickets at www.bostontheatrescene.com