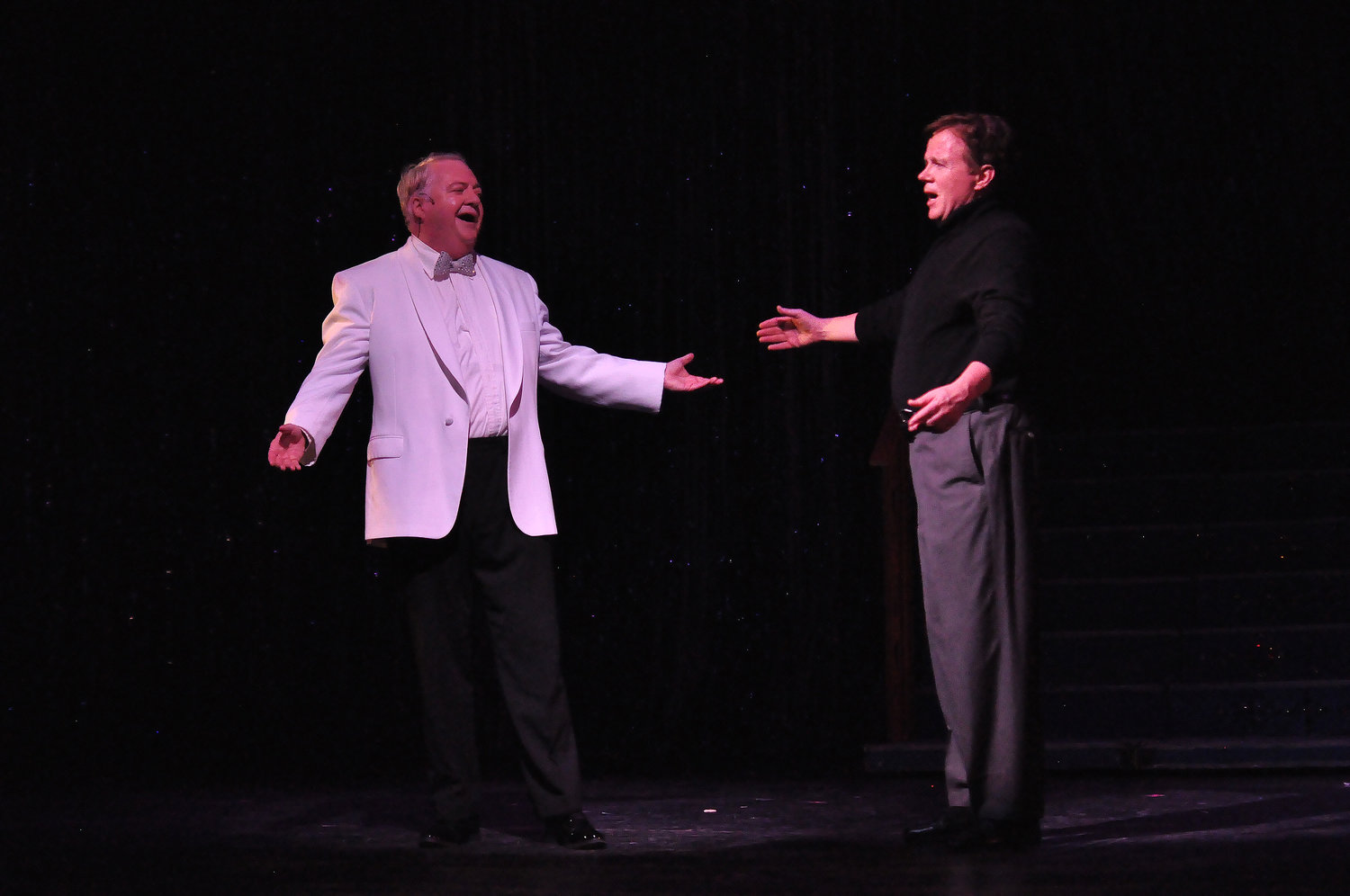 Theatre Talk Boston (henceforce TTB) caught up with the stars of La Cage Aux Folles playing until August 18th at Reagle Music Theatre of Greater Boston.  Sitting in their dressing room before a recent performance, James Darrah (Albin) and J.T. Turner (Georges) spoke with TTB all about the show, their careers, and their love of Reagle!

TTB: Hi, gentlemen! La Cage Aux Folles is one of those iconic musical theatre shows - for those who know don’t know could you tell us what it is about?

James: Oh goodness, what is La Cage about? Really, it’s about acceptance. According to the author, Harvey Firestein, we have a gay couple running a gay nightclub on the French Riviera - who are living their lives out loud. Fully accepted by the community, they are prominent members of this small coastal town. Even when the show opened, the idea of them not being accepted is not part of the story. The story is acceptance of people as individuals. What the story is about is about a gay couple whose son comes home and is marrying a woman whose father is essentially running for president…

J.T.: ...yes, a very conservative politician and the son wanting to marry this girl wants to ignore the fact that a man has been the mother in his life the past 20 years or so. So, escapades ensue from there…

TTB: When was the first time you saw this show or your first experience with the piece?

J.T.: So, I never have seen this show, ever! I saw the Robin Williams film Birdcage and it was a bit of a fluke for me to audition for this show, but my wife and her daughter urged me to audition - so I did, and I was lucky to land this amazing role. I had no idea the scope of the part... and how much heart was in the show. The music is so beautiful, and the story is just so terrific, but I had no background coming into it whatsoever. You on the other hand... [points to James]

James: Well... the first time I saw La Cage was early in a period we call the ‘80s when I rented the videotape of the original film. I was doing summer stock at the lovely “Theatre By The Sea” and I came up to Boston to audition for a show, but when I came up I got to see La Cage Aux Folles in previews at the Colonial Theater. That was the only time I have seen it, but I love the score, I worked with Jerry Herman a few times and the original choreographer and music director a few times from doing other productions they were involved with.

TTB: So, you just started performances - how have they been going? How have audiences been responding to it?

J.T.: So much fun! For me it is like a rollercoaster - I am the first one out there and off we go. The only time I get a break is when James is performing his solo stuff for which I am eternally grateful - and it just goes! The audiences we have had have just been so gracious and loved it. The enthusiasm of the audience has just been so fantastic.

James: Yeah, I think everyone has been great. What I love is that these audiences have been exceptionally gregarious and really with us all throughout the play. It’s really great because it’s telling us that the story we are telling is working.

TTB: You both are no strangers to Reagle Music Theatre - what is it about this place that makes it so special and keeps you both coming back?

James: Well I keep coming back because I grew up in Waltham. Born in Boston and grew up about a mile down the road. I went to school here [referring to Waltham High School] and all of my theatre training up until I left home was right here. Growing up, summers were spent doing Reagle shows - my entire family was involved, my dad would make the sandwich boards signs on the street. I keep coming back because it's always quality theatre. A few years ago, I came back to do 42nd Street here and I thought it would be a hoot and then this year this came around and I actually reached out. The opportunity to do this particular role doesn’t come around very often - it’s just a good, good theatre!

J.T.: Yeah, I love it here. It is such a unique place to work - a majority of the cast is often fleshed out by college students during their summers who are just learning the craft. For me, at this point in my career, I like to think I am a seasoned veteran - I just love the opportunity to work with this young, fresh energy!

TTB: One question we ask all of our guest - any fun onstage mishap stories?

James: [laughing] I have a few...let me see. So, my shoe comes off in my show... I was doing A Funny Thing Happened On The Way To The Forum which stars the great Mickey Rooney. We were doing this footwork, and my sandal came off and flew across the stage and almost hit Mickey in the head. And this being Mickey Rooney, one of the greatest comedic talents of his generation, went and retrieved the shoe and returned it to me. Of course, being Mickey Rooney, that alone took eight minutes, and the audience was pissing themselves. After the show I was called to Mickey’s dressing room and I went in and he had a very serious face and said, “So... the shoe” and I was apologizing profusely and he just looked at me and goes, “Can you do that eight times a week?”

J.T.: One of my favorite stories is that I am onstage with an actor and he is supposed to reach inside his pocket and read a letter. He is supposed to be reading this letter with all of this information for about two minutes or so. One night he is out onstage and he reaches into his pocket and realizes that he doesn’t have the letter and he realizes all he has is one of those tiny, tiny slips of paper that says “Inspected by #52” - which he proceeds to read as if it was this two-minute letter so he reads the front and the back and along the edges and the audience was just losing their minds. Happily, it wasn’t a serious show so we could get away with it, but I always love that story.