A Chat with Nathan Malin from SpeakEasy's Admissions 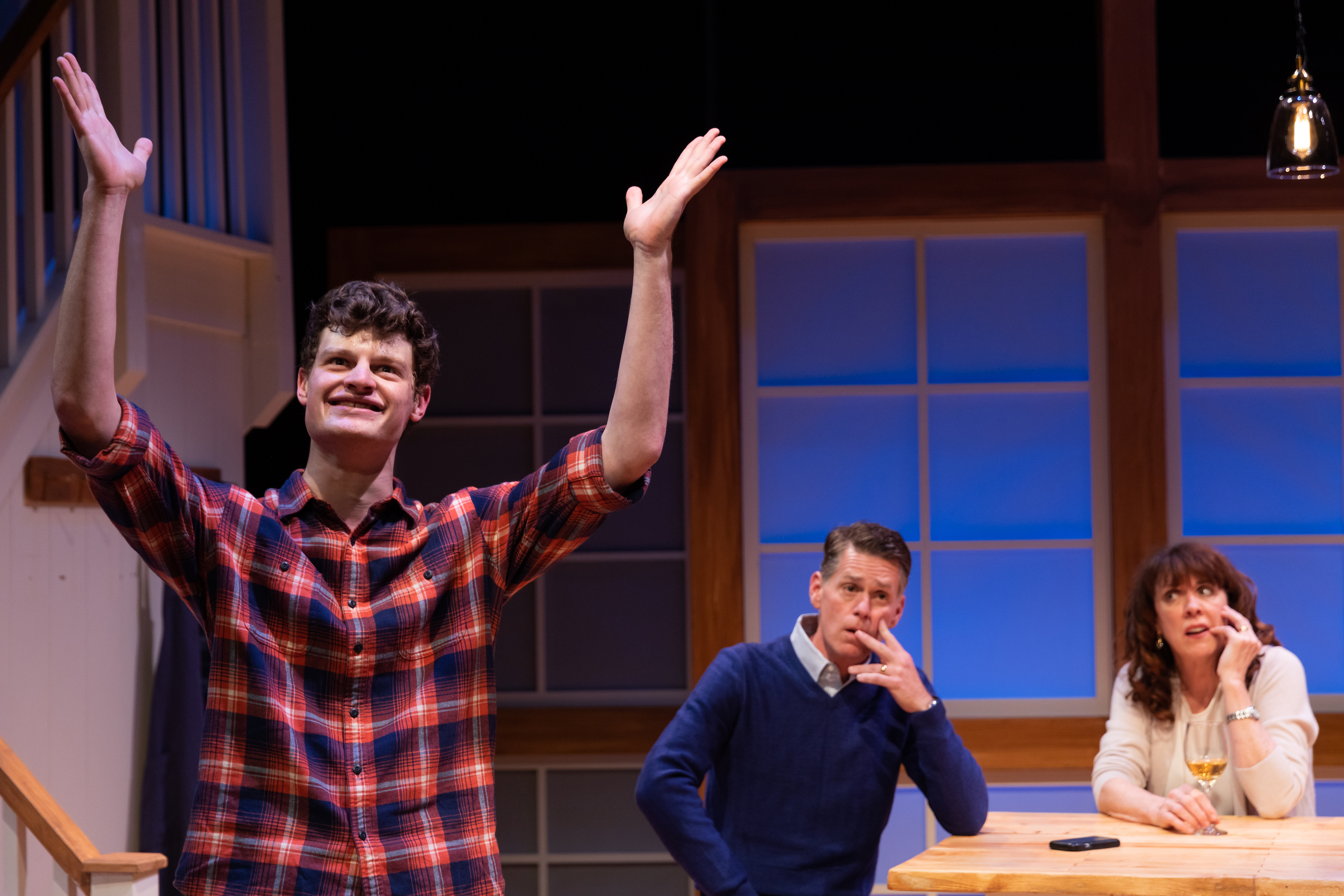 Theatre Talk Boston (henceforth TTB) caught up with Nathan Malin, who is currently giving a rather brilliant performance as Charlie in SpeakEasy’s production of Admissions.  Read below to see Nathan speak about connecting with his character, his thoughts on the current college admissions scandals, and his own college journey.

TTB: To start, tell me what Admissions is about.

Nathan: I think Admissions, well like the The New York Times said and everyone quotes "it's a play by the left and for the left." It's about a prep school admissions officer who is forced to come to terms with her hypocrisy and her seemingly liberal values which don't actually have a lot of credit to them when you go deep and look at her actions. After her son is deferred from Yale, she is basically asked: are you going to live up to what you say in public or are you going to be the person who you want to be in private. It's a question that I think a lot of us are struggling with right now. My favorite line in the play is when the character Ginnie says, “you want things to look different but I'm not sure you want them to be different”–I think that's really what the central question of the play is asking. Sherry wants the world to look different, but does she actually want it to be different. And for the rest of “White Liberal America”–do we want things to look and sound different or do we want things to really be different. What are we willing to give up in our public lives?

TTB: And who do you play?

Nathan: I play Charlie, who is a high school senior at Hillcrest. He is a very bright young man who argues his opinions fervently and sometimes works himself into a bit of a bind with what he argues. I think he's really just trying to make sense of everything his parents have told him is right and wrong and he's always trying to do the right thing. And sometimes that doesn't turn out so well for him but it's always with the intention of doing what's right.

TTB: What was your initial reaction to reading the script–were you familiar with it before this production?

Nathan: When it premiered in New York I got a text from a friend who was like "you have to read this play there's totally monologues for you in it." So, I read it and I was initially like I don't know how to feel about this. Is this ok? There's some things about it that are problematic–is this really the story we need to be telling right now. After having done it I think the answer is absolutely yes. But those were initial questions that came up for me and like what is it like to put a play about race on stage with no people of color on stage and in working on the play. I think I've found a lot of answers to those questions but those were initial things that came up for me. I thought that the only way I was ever gonna answer the questions was by working on it. My journey with the play has been realizing how smartly it's written and realizing how everything in it that upset me or made me think "is this right/is this politically correct" was meant to make me think those things.

TTB: I love Joshua Harmon’s writing so much. I don’t want to spoil too much, but you do get to perform one of the most provocative monologues I think has been seen, at least in Boston, in a long time. Walk me through working on that.

Nathan: That was one of the things I worked on most in rehearsal. I think my first impulse with it was just I was so enraged about everything I was saying, it made no sense to me, it was all so ridiculous. Playing with all this fervor, you know, and eventually what we realized was I had to take the audience on this journey where they started to think, “yeah, I do agree with this kid,” until I reach the end of the monologue and they realize they've been agreeing with essentially someone who's arguing white nationalist views. To play it with such anger would rob the audience of that journey. I can feel it every night when I play it–I can feel the audience coming along with me on the journey and laughing at things that when I first read them on the page I never found funny. Hearing it argued rationally and logically allows the audience to sort of be taken on this ride which I think is what's so exciting about it and why it's so well-written.

TTB: Talk to me about the conversations that were had in the rehearsal room because this is a play about race, and it is only five white actors–what was that process like?

Nathan: We spent a long time working at the table and talking about our own personal experiences with all this stuff. Eventually what we arrived at was a point that was made by the Assistant Director Kira, who's wonderful. She said that the reason there were no people of color in this play was because that was the only way we were going to get to see white people in their element and unfiltered. If you put a person of color on that stage, then we're not gonna say the things we say, and we honestly need to hear those things in order to deal with them. There were definitely questions for all of us of "what is our responsibility in telling this story?" I think if it's done carelessly it can be dangerous. I think it can be very impactful for the right people.

TTB: What do you hope audiences get out of this performance?

Nathan: I hope that the play opens up a more honest conversation about race. And I think actually one of the strengths of the play is that it allows white people and people of color to start saying the things that they thought they weren't supposed to say. Even if those things might not be right or they might be hurtful then at least those things get put in the air and we get to deal with them instead of packaging them all up and bottling our feelings up because I think we'll never arrive at any sort of answer to this if we don't honestly say how we feel.

TTB: On a lighter note, talk to me about your college admissions journey. Was Boston University your first choice?

Nathan: Yeah, it is definitely a lighter note! It was a little difficult for me to bring myself to this part of the role and I was always asking people about their college admissions process because mine was just nothing like this. I basically knew I wanted to come to B.U. since the end of my junior year of high school, and I applied early decision and I got in and I didn't apply anywhere else. So yeah, I don't really remember the whole college admissions process as the phenomenon that it's become. But it's interesting–it's been interesting hearing other people's stories about it about and you know obviously reading about the Felicity Huffman and Lori Loughlin Scandal.

TTB: Yeah, I was going to ask you about that–Admissions has nothing to do with these scandals, it was written before that, but has that being in the ether changed anything about this production?‍

Nathan: I mean I think it certainly makes it timely for audiences and it's certainly something we've been thinking about. College admissions in the plays of vehicle to talk about privilege–the play isn't really about what it's like to get into college obviously. I think these stories in the news have started to bring into everyone's consciousness the intersection between college admissions and privilege and the fact that for people of that level of privilege going to college is just completely different.

TTB: And you are still a full-time student here! Talk to me about balancing classes and acting in a professional production every night.

Nathan: Yeah, it has been a little crazy. Throughout rehearsals I was also assistant directing and understudying for a production of The Crucible (read our review here) but yeah, it's been a ride. It's really nice having a place like SpeakEasy and going to Calderwood–it kind of feels like a nice little respite from school and stuff.

‘Admissions’ is playing at Calderwood Pavilion now until November 30.  Get tickets here: http://www.speakeasystage.com/