IT'S ONLY A PLAY Is a Virtual Feast At George St. Playhouse — Review 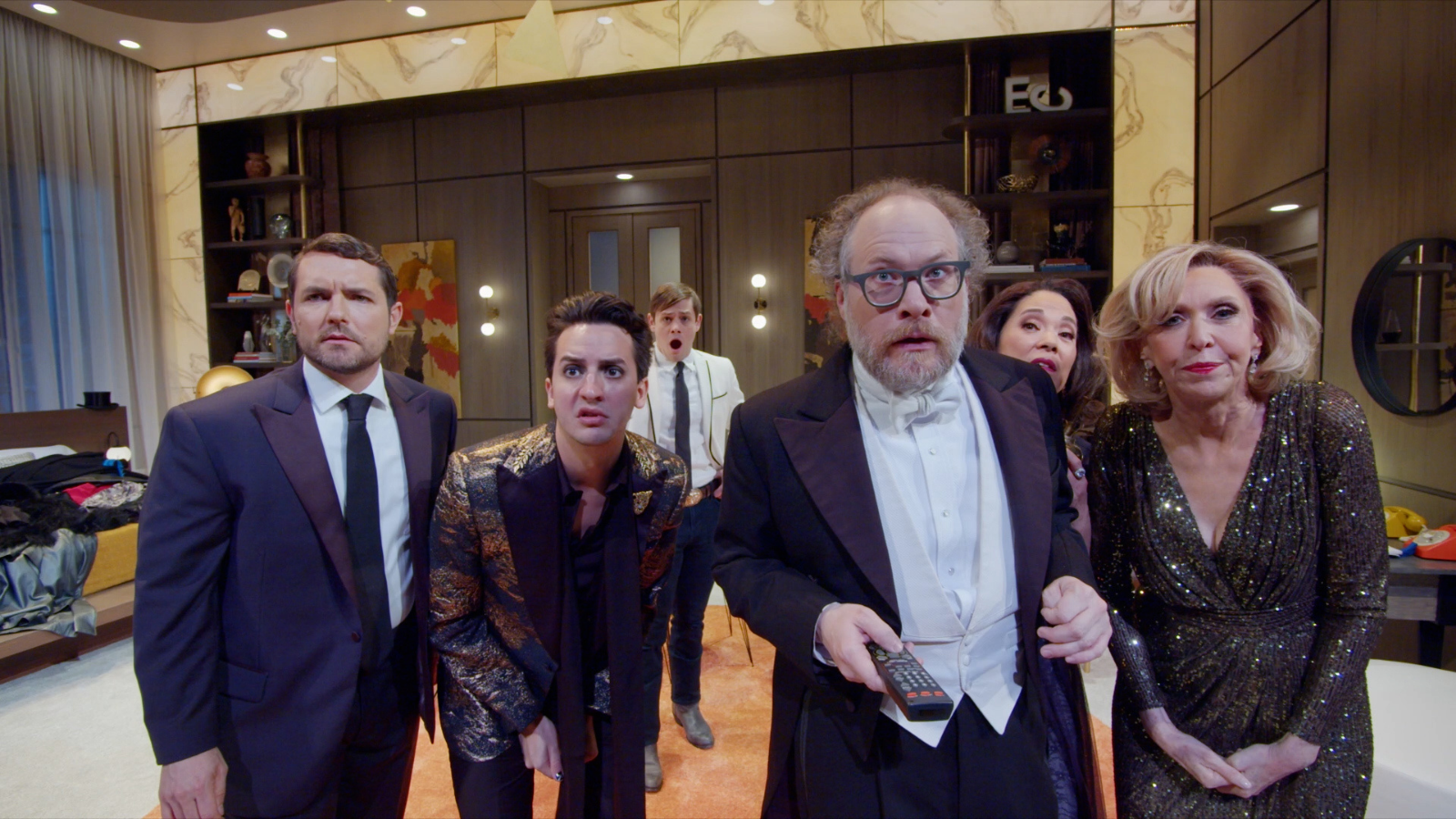 The cast of "It's Only A Play" | Cinematography by Michael Boylan
By
Noah Pattillo
No items found.
on
Category:
Reviews

I won’t lie, I’ve been apprehensive about most virtual theatre throughout the duration of the pandemic. Something about seeing actors in small squares on my laptop depresses me, it lacks the spectacle that makes me excited about theatre. But while watching the George Street Playhouse’s production of It’s Only a Play written by theatrical legend Terrence McNally, I finally got virtual theatre spectacle and for the first time in over a year, I was elated to be seeing a play! It’s Only a Play has made spectacle out of the ordinary. A stylish, luxury townhouse set by David L. Arsenault gives the production a richness that zoom backgrounds lack; the couture costumes by Alejo Vietti help color eccentric characters and create real humans; and clever cinematography by Michael Boylan creates dynamism while maintaining the integrity of the theatrical artform.  It’s Only a Play is an absolute marvel to watch and sets a new gold-standard for pandemic era theatre.

Set at the glamorous opening night party of The Golden Egg, a new ~fictitious~ broadway play, It’s Only a Play follows a gaggle of show people as they anxiously await the reviews to roll in. The leading lady, the director, the playwright, the producer, the coat check boy, a TV actor and even another critic are waiting for the make it or break it Ben Brantley New York Times review. Spoiler alert: it’s bad… like really bad, like oh-my-god-I-can’t-believe-someone-actually-wrote-that bad. Mr. McNally takes such wonderful care crafting his characters and gives actors meaty roles to explore. The entire cast deserves major applause for their work. While the production had no live audience, the cast delivered performances with finesse and slap-stick timing that had me laughing out loud. There’s Gus, an overly eager coat check boy, charismatically played by Doug Harris. Christine Toy Johnson is Julia, the clueless but well meaning producer. Julie Halston gives an electric performance as Virginai Noyes, the cocaine snuffing, star on parole. From the moment Ms. Halston stepped on stage, I was waiting with anticipation to see what she would do next. I felt like she was playing to a real audience and not to a camera, her performance. It’s Only a Play is one of those beautiful true ensemble plays. No role was significantly larger or smaller than the others and everyone had a moment that left me howling. In the scene at the start of act 2, when Brantly’s review is finally read, the reactions are extravagant, but the flamboyant director Frank Finger, played with just the right amount of camp by Greg Cuellar has a reaction to a later review that left me in stitches.

While there’s so much to praise about this production, the play itself is lackluster. Mr. McNally is one of the greatest modern American playwrights, but It’s Only a Play is not his best work. It’s well written, but it lacks focus and purpose and there were several moments along the way where I found myself asking where is this going? The ending is filled with show people sentimentality that feels out of place in a play this funny. Even if the plot is weak, there’s no denying this is a fantastic vehicle for comedic actors.

Director Kevin Cahoon has done a splendid job with the filmed-live format. There are lovely stage pictures created specifically for different camera angles. It’s a fully realized directorial concept. It feels theatrical, yet there are moments where it’s clear Mr. Cahoon took into account what he wanted the entire frame to look like, similar to a movie. It wasn’t a play that was filmed for the Lincoln Center archive. It was a play that was directed to be filmed!

This production of It’s Only a Play, streaming on the George Street Playhouse’s website until July 4 is an absolute must-see. While the script lags a bit, this smartly designed production was a joy to watch and was the closest I’ve felt to being in a theatre since March 2020. For the first time in months, I didn’t check my phone or get up to chat with a roommate. I was glued to my screen. And who knows, maybe the sentimental ending rubbed off on me. My heart was filled with longing for better days to come when we can all sit together and participate in the theatrical communion.

"It's Only A Play" runs through July 4. For tickets and more information, click here.