JANE ANGER Presents Hilarious Parallels Between Past and Present – Review 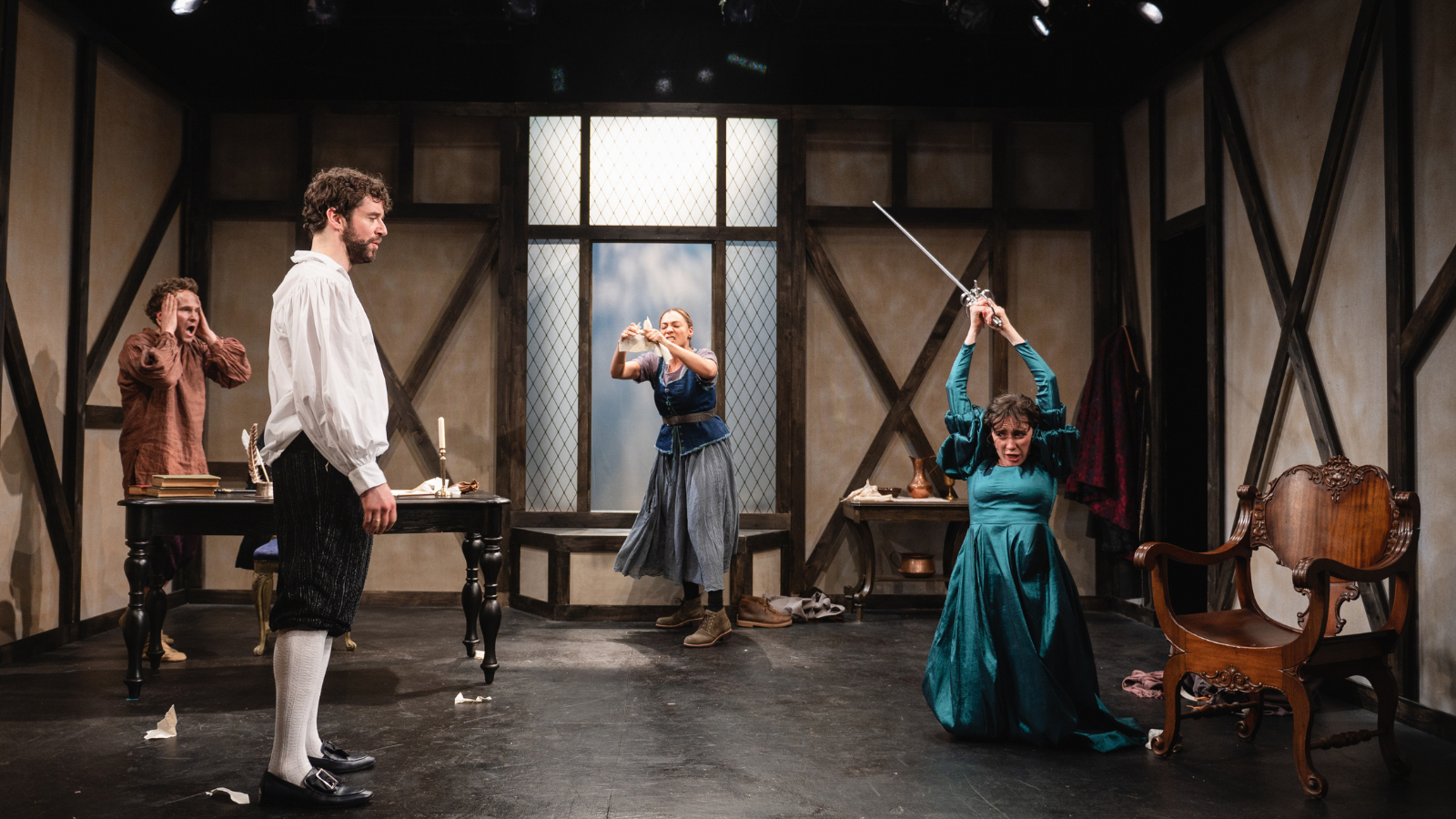 This season has seen a strong, varied crop of work off-Broadway–but not for the first time, theatergoers have been a bit starved for comedies. Thankfully, some lighter fare is now starting to emerge as the weather changes. There is Bryn Turner’s At the Wedding at Lincoln Center, JC Lee’s All My Girls at Second Stage, and down at the invaluable New Ohio Theatre in the West Village, the gloriously silly and gleefully entertaining Jane Anger, which opened Monday with a burst of infectious energy.

The gags come thick and fast in Talene Monahan’s hilarious new play. Within the first fifteen minutes, we get William Shakespeare’s pee smelling of rotten asparagus, the famed dramatist recounting an abandoned play where “all the characters were rats,” and a “Who’s On First”-esque routine, which circles from funny to not funny then back around to funny again. It is all very dumb, and it’s all very, very fun.

The year is 1606, and the plague has struck London once more. “Again?” Billy Shakes (Michael Urie) moans in disbelief. The world’s finest dramatist must go into quarantine with Francis Sir (Ryan Spahn), a lowly commoner, as his only company. That is until Jane Anger (Amelia Workman), an old flame of Bill’s and now a full-time “cunning woman,” makes a surprise visit through the window. Jane has written something new, but she can only get it published with the backing of a man. Is ol’ Willy willing to help?

Monahan’s play has substance to spare, but never takes itself too seriously. (Well, almost never–more on that later.) She has easy fun with the parallels between plague and present-day quarantine. Social distancing here becomes “The Pony Rule,” whereby strangers should use the length of their pony (or an imagined one) to enforce a safe distance. In other words, it’s just an excuse for Urie and Spahn to daintily prance around the room like ponies.

Partners in real life, Urie and Spahn are a dream duo on stage. Spahn hogs the stage as Francis, a childlike attention whore who insists, against all evidence, that he’s “a young lad, not yet sixteen.” Each spoken thought is a gleeful escape from subjugation. After each line, Spahn bows his head and stares at the floor as though resetting himself to servitude, a tic that gets funnier each time. Urie is doing a more familiar schtick as Bill Shakes, but it’s a good one, and the timing between him and Spahn is impeccable.

When Jane does arrive to shake things up, the disruption could perhaps be a bit more. At times, Workman feels inactive on stage, hovering on the sidelines while Urie and Spahn play. Then again, if Jane feels almost like a visitor from a different play, that may well be the intention. The true scribe behind Jane’s pamphlet, a rare early feminist work, is unknown. In hypothesizing its author, Monahan crafts her as a sort of transplant from another time. Jane has left the patriarchal world of 1606 far behind her. Shakespeare and Francis are nothing to her except figures of amusement, and a means to an end.

Jane attempts to pass that wisdom onto Anne Hathaway (Monahan), Will’s neglected wife and the play’s final arrival through the window. Shakes has already informed us that his wife is ceaselessly irritating and “just tries…so hard.” That starts as a very funny gag on a certain present-day actress, then grows into a smart commentary on the impossible baggage saddled onto women attempting to operate half as freely as even the most mediocre men.

Hathaway should be even funnier here. Monahan seems hesitant to milk her long pauses and lonely anguish for all they are worth, possibly concerned about herself slipping into cruel mockery. But even when making a serious point, silliness is the play’s most successful register. Anne could be even more absurd, and still register as a cruelly abused figure.

No matter, because the play quickly recovers with its final turn into full-on revenge comedy. Shakespeare and Sir Francis reach demented levels of ham as they realize, all too late, that Jane and Anne are stealing their play right out from under them.

The last scene underlines the point a bit more than necessary. Monahan’s last play in New York, How to Load A Musket, had a similarly heavy-handed coda. Here and elsewhere in the evening, a bit more judicious cutting might have lent a sharper impact.

At its best, Jane Anger reminds us that society’s most deeply ingrained injustices are only as painful as they are deeply, deeply stupid. Monahan’s excellent new play meets that scourge of stupidity with rage, wit, and the most artfully crafted dick jokes you’ve ever heard.

Jane Anger is now in performance at the New Ohio Theatre through March 26, 2022. For tickets and more information, visit here.