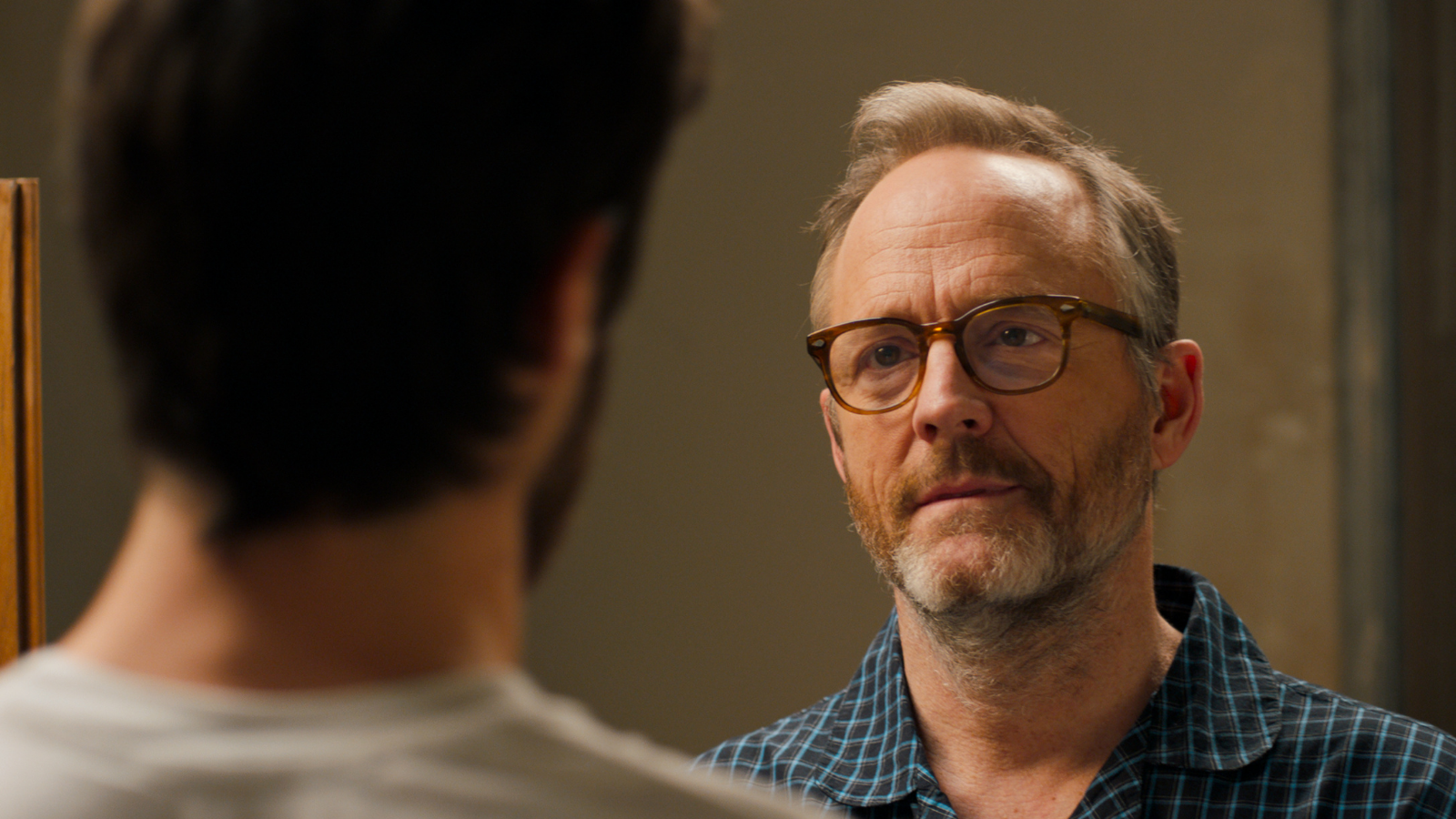 Niv Nissim and John Benjamin Hickey in "Sublet"
By
Juan A. Ramirez
No items found.
on
Category:
Features

Amid the neverending discourse of whether straight actors should play gay, John Benjamin Hickey’s career stands as a defiant “Who cares?” The out gay actor found his big break in Terrence McNally’s 1995 play Love! Valour! Compassion! (a role he recreated for the film version) and, though he’s played characters across the Kinsey scale, he has lent his talent to landmark gay works like Cabaret, The Inheritance, and The Normal Heart, for which he won a Tony Award.

He most recently starred in Sublet, a film by Yossi & Jagger director Eytan Fox about a gay travel writer who strikes up a friendship with the young owner of the Tel Aviv apartment he rents for an assignment.

On a recent Zoom call, I spoke with Hickey about the film, his career, and the trajectory of gay life in showbusiness. Before I could even begin, the actor complimented my Pedro Almodóvar shirt, and the poster for Angela Lansbury’s 1972 Gypsy hanging behind me, immediately working his way into my graces.

Our conversation is edited for length and clarity.

How did you get involved with the project?

I’ve been a big fan of Eytan for years; he’s sort of the Israeli Almodóvar. About four years ago, I got a call from my agent saying he’d written a script with me in mind. That blew my mind, because I'd never heard that before. He came to see me when I was doing The Inheritance in London, and we struck up a wonderful friendship.

Did you ever ask him what it was about you that he wanted to write for?

I think he'd seen me, an out gay actor, playing a couple of gay parts that he really identified with. It was probably important to him for the film’s two leads to be played by out gay actors.

I know Fox used both characters to explore different aspects of himself, did you feel the same way?

I mean, we're both gay men of a certain age. Michael's a lot stuffier than I am, though, and a lot more conservative. I had to really work hard to see where the similarities between the two of us ended and where Michael’s wonderful button-down feeling came in.

Do you usually find your character once you’re in costume?

Let me just put it this way: Michael wore khakis; I don't wear khakis. To me, it's all about the costume and, as soon as I saw the khakis they picked out for me, I was like, “Oh, that's who this guy is.”

One of the film’s biggest themes is the characters’ generational divides, and you’ve starred in a lot of gay narratives that deal with that subject. I’m wondering if, throughout your career, you feel you’ve crossed this divide in the characters you play?

I was never the kid. You know, when I did Love! Valour! Compassion!, the great Joe Mantello directed it. Joe and I remain close friends and, not long ago, we were talking about Terrence McNally, who we'd just lost. We were talking about how much we loved him, and how much he meant to us, and how he gave both of us our careers.

When we did Love! Valour!, we were only 31-years-old, and I was already playing the middle aged guy. I was probably about ten years too young for that part, but Joe shrewdly wanted to cast him a little younger. I think, as a person I’ve changed with the times, but my characters never went from boy to man. I always playing the man, which is, you know, cool.

I was actually just looking into watching the film adaptation of Love! Valour! Compassion! and had to order a used DVD online because it’s not really available anywhere. But now you have Sublet streaming in 2021. How have you experienced the change in gay cinema over the past 30 years?

25 short years ago, it was a real risk to play a gay character in film or television, especially if you were out. Even up until recently, it was considered brave for a straight actor to play a gay character, and a lot of gay actors were marginalized. I was lucky enough that I never felt that stigma but, in the beginning of my career, agents would tell me to be careful not to get typecast for playing too many gay roles. It was a terrible and limiting way of thinking about your career and the multitudes that are contained in playing different characters. There are so many more gay parts now and, wonderfully, more out gay actors with a sense of ownership over their representation that is really exciting.

I don't think that only gay actors should play gay parts simply because, by that standard, I wouldn’t be able to play straight parts. Should straight people only play straight parts? The gay community has been underrepresented in casting, but to say yes to that would be a very imbalanced double standard. Today, gay actors are much more visible and not marginalized, so I think very soon your generation will see a total fucking gay Brad Pitt star, and that'll be incredibly exciting. He’ll be fucking girls and guys in his movies, and it's all good! I sound like [my character in] the movie…

At least in New York theatre, I’d think the percentage of out gay actors in gay works is higher than it is in film. Do you think you were able to continue your career because of your work in theatre?

So, yeah, I do believe my career has been sustained by wonderful gay parts in a lot of gay plays, but I certainly didn't choose it that way. It was never anything political. I'm not apolitical, but as far as my art is concerned, I'm not political. I basically go where the work is, and that's where the work was. That's what actors do, it's called acting.

Sublet is now in theatres and will stream on-demand beginning July 9.