Kathleen Marshall Offers Sneak Preview of ANYTHING GOES in Cinemas 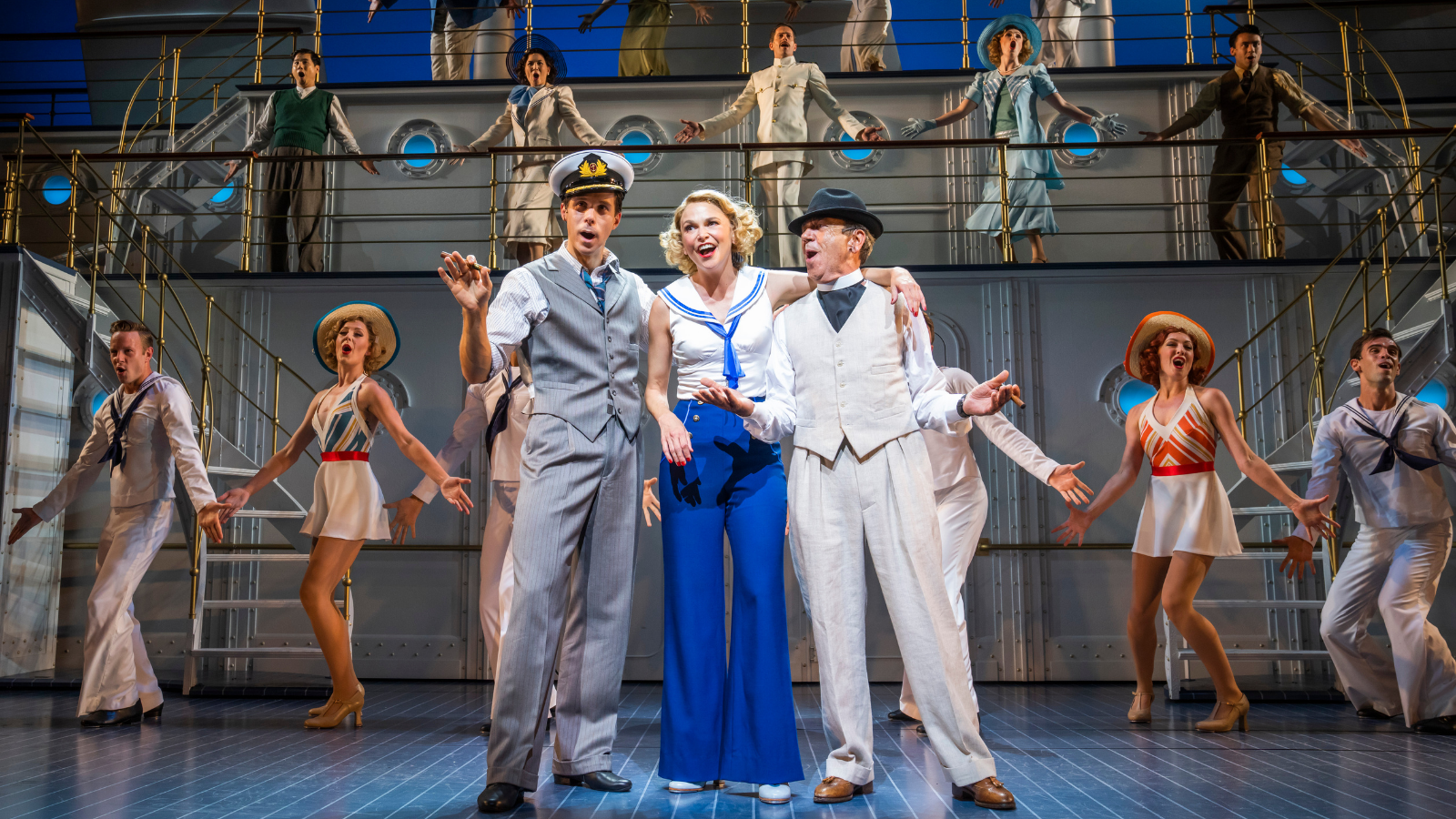 This spring, one of the biggest musicals ever to hit the stage is coming to the big screen. Fans can check out Sutton Foster in Anything Goes, filmed live in London last summer, in cinemas across the U.S. on March 27 and 30.

The production recently scored 9 Olivier Award nominations, including Best Actress in a Musical for Foster, Best Director of a Musical and Best Theatre Choreographer Kathleen Marshall, and Best Musical Revival. The winners will be revealed April 10.

Ahead of the film’s premiere, Theatrely sat down with director Kathleen Marshall to talk about how to show transferred across the pond 10 years after the revival opened on Broadway, why it’s the perfect show to see in the movie theatre, and why tap dance is more important than ever. Our conversation has been edited and clarity and length.

‍Thank you so much for taking the time to speak with us. I feel like this is very much a signature project for you. What made you excited to revisit Anything Goes on the stage?
Kathleen Marshall: Well, several years ago there was a conversation with Sir Howard Panter in Trafalgar about the possibility of bringing Anything Goes to London, and we actually were in conversation with Sutton, who then wasn't available because of The Music Man, but we decided to sort of move ahead anyway. Then, she was available, so it worked out perfectly for us to revisit with her. I was excited to revisit the show under any circumstances, but I think having Sutton make her West End debut with this production got me very excited.

Were there any moments for you as a director that made you excited?
Well, the thing about Anything Goes is that it's really personality driven. You know, there's all these wonderful characters and they’re all very malleable and flexible, based on who's playing them. Then, also to do it with a whole new company alongside Sutton—I mean, Robert Lindsay! I've been a fan of his ever since I saw him in Me and My Girl on Broadway and the chance to work with him was just a dream come true. Plus, Felicity Kendal, Gary Wilmot, and all these incredible British actors who were new to me, and Sam Edwards, our Billy.

I want to talk about the big Act 1 closer, the tap dancing number. I feel like watching Sutton Foster will just live rent free in my mind forever. It got me wondering, too, what do you think of the state of tap dance and musical theatre today?
It is a tricky balance because, of course, the way choreography for theatre is meant to be seen is that you see the whole thing. You see the big frame and you, as an audience member, can choose what to look at, right? You can choose whether to focus, you know, center stage or look at somebody else. And I know there are people who love to go see choreography and find a dancer or two in the ensemble that they just kind of fall in love with and follow them through the whole show. In a movie, we’re telling you where to look. If we just did one big wide shot, it wouldn’t have the same impact. It had to be very carefully shot and edited so that you get a sense of the big picture but you also get a sense of the interactions and the relationships that are happening.

To me, tap is always a conversation between people or in a group dialog. You always need to have that. And it's interesting what you're saying about tap because, most of the time, tap is an expression of joy. Not always, you know, Savion Glover does some really incredible and intense dramatic tap sometimes. A lot of musicals today are musical dramas, or contemporary, and they’re not going to have exuberance and that exhilarating feeling of tap. My husband, Scott Landis, is one of the producers on Funny Girl, which is going to be starting performances soon, and they have tap dancing in that. Of course, it’s show-within-a-show numbers, there’s Ziegfeld Follies numbers and there's tap dancing in a production number within the Ziegfeld Follies. We always used to joke that we should sell tap lessons at intermission because I think audiences feel that sort of joy and exuberance it just makes people happy.

It sure does! Did you notice any differences in the reactions to jokes and musical numbers between the U.K. and U.S. audiences?
There's only one British character in the show: Lord Evelyn Oakley… and they have no idea about his big musical number that's coming in the second act—it’s a surprise. It’s really sweet how much the British audiences just love this slightly silly British character. A lot of the humor translates but there were a couple of things that we just changed or simplified because they were cultural references that just don't mean anything. There is a joke when Moon and Erma are playing cards, and she says, “I don't want to play cards,” but she sits down anyway, and he says "Got any threes?" and she says "Go fish." Well, they don't know what Go Fish is. So we’re like [makes a face like “uh-oh”] and I would rely on our cast a lot, asking “Does that mean anything here?” They're like, “No.” [laughs.]

That plays into how malleable the show is, like you were saying. I feel like almost every revival has had some sort of new lens, or songs get added, or songs get taken out. That's one of the really beautiful things about Anything Goes—it has its own special place in the American musical theatre canon.
This show is from 1934, so it's almost 90 years old and [there’s a reason] t it’s still done in high schools, colleges, community theatres, summer stock, and then, you know, big productions like ours. First of all, there’s Cole Porter’s score, which is just fantastic. The melodies are beautiful, the lyrics are smart and witty, and his ballads of yearning and longing are just so heartfelt. Then you’ve got this very witty book and it’s a sort of screwball romantic comedy. So you have characters that you’re rooting for and hoping that everything's going to end happily ever after. Even though it doesn’t seem like it’s going to be possible, like any good sort of screwball comedy, it all comes together in the end.

Absolutely. So, what can audiences expect from the movie?
For people who have an affection for Anything Goes, hopefully we're going to deliver the show that you love, plus more. There are some surprises and some delights that maybe you wouldn't have seen [in the theatre]. And certainly, even for me, when we were editing it, there were moments between the actors…and all these incredible little moments that I didn't always see because I usually sit in the back of the house. So, what's wonderful is we get the big sense of this wonderful glamorous, fun, romantic show, but then you get this intimacy that you don't necessarily get if you're sitting in a theatre. Hopefully, our live audiences in the movie theatres will be laughing and applauding along with the audience from the film. I think that's very important. A musical comedy needs the participation and energy of the audience.

For fans of yours, what can we expect to see from you next?
I have several things developing, none of which I think I can talk about right now because we’re all sort of getting things together. The crazy thing is that I’m going to be taking care of Anything Goes for a little while because we’re in rehearsals now for a U.K. tour and a return to the Barbican, and then hopefully we’re going to go beyond that into an international tour. So, it’s going to be a part of my life for a while, which I'm very happy about.

That's amazing and so great for audiences. I mean, go check it out in movies and then be ready to go see it on stage—it’s coming back!
I think that's interesting because it used to be that the philosophy for doing live captions Broadway shows was like, “Don't give anything away! Make them buy a ticket and come see it live.” And now, I think when we’ve seen Hamilton and Come From Away and these other musicals that have been live captured, it might actually pique interest in people wanting to then see it live rather than the opposite.