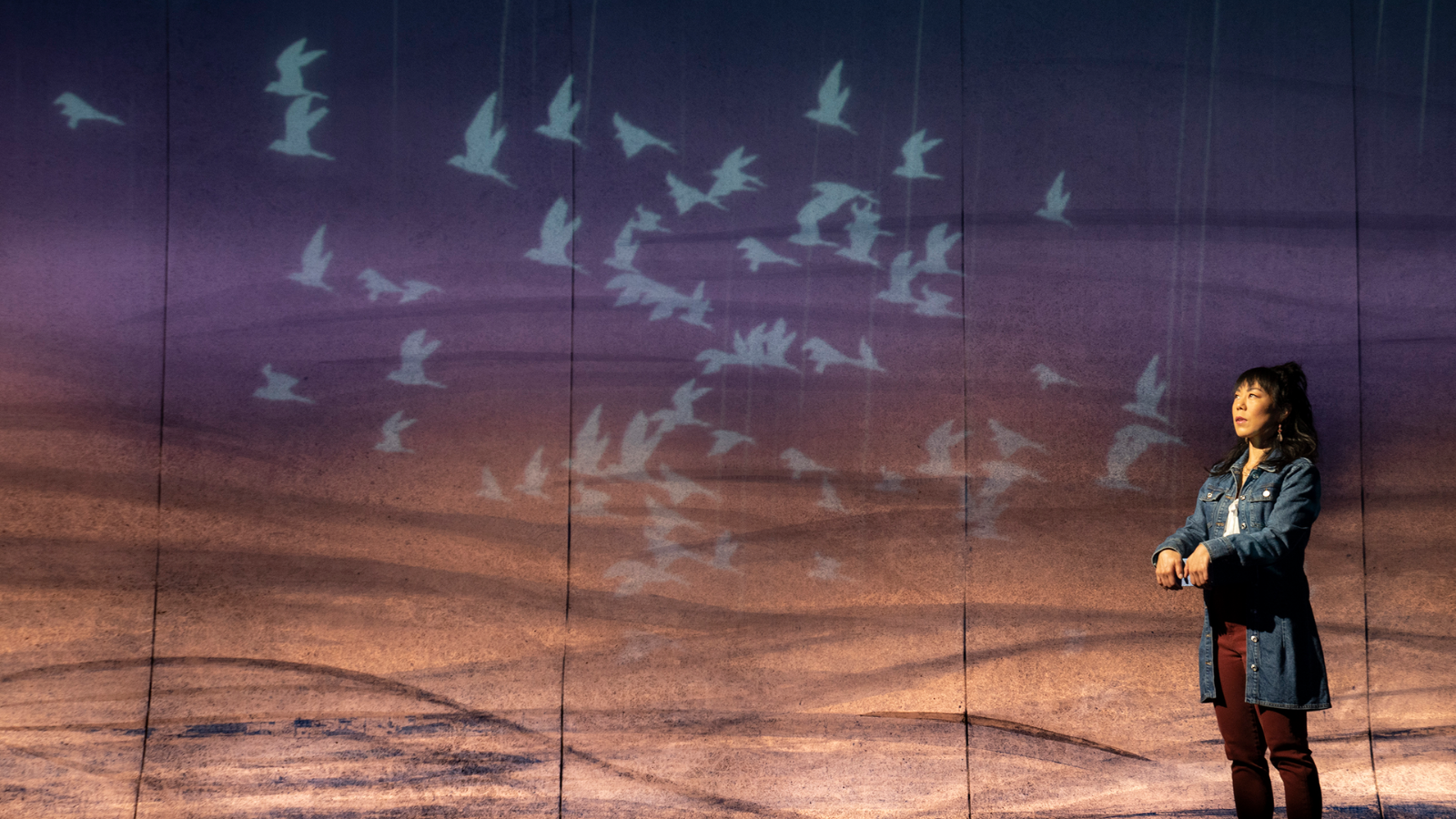 When I walked into the Tony Kiser Theatre on Sunday, I was greeted by a bluish-grey set with a desk downstage and a bench upstage, muted colored mountains traced the wings. Over the next 90 minutes, an intricate play about long distance companionship, and origami, glowingly unfolded itself. This new play, Letters of Suresh, by Rajiv Joseph opened tonight at Second Stage Theatre.

The play starts with Melody, a Japanese-Korean woman who’s great-uncle (who she never met) recently passed away. Melody recently returned to Seattle from his funeral in  Nagasaki with her great-uncle's only possessions: A box of letters from a man named Suresh. Melody writes a letter to Suresh informing him of her great-uncle's passing and to ask him if he would like his letters back. As the play continues, we learn more about the author of these letters and the relationship between Suresh and Melody’s great-uncle, Father Mitsuo Hashimoto.

Father Hashimoto was a member of a christian church in Nagasaki and began a written correspondence with Suresh after watching him fold an origami bird at an origami convention to honor the children killed by the nuclear bomb dropped at the end of World War II. Over the course of the play, we learn about Suresh’s life through his letters to Father H.

Joseph’s play unravels itself so wonderfully. We learn about Father Hashimoto mostly through the letters Suresh has written to him. Melody notes how this offers a one-sided, but personal peek into a person’s life. In his letters to Father Hasimoto, Suresh opens up about the death of his mother and the way he blames himself for it. We also learn about some of the women he’s loved throughout his life. Suresh also uses Father H as a sounding board to work through some of the choices he’s made in his life. In one of her letters to Suresh, Melody lets him know that her family read his letters and that something about them helped mend wounds between her parents and her estranged sister.

The play was told almost exclusively through the letters Suresh or Melody wrote, portrayed vividly by both Ramiz Mondsef and Ali Ahn respectively. Both actors master the imagery ladened text and their performances catapult the script into something deeply moving. While I loved watching both of their characters' lives separately, I yearned for the two of them to truly connect in some way. There was only one scene between two characters in the play and it occurred when Suresh facetimed Amelia, a woman he had an affair with. The scene was well crafted, Joseph did an exquisite job creating tension between the two of them, but I found the character of Amelia unnecessary to the rest of the piece. In a play just over 90 minutes, it didn’t feel like the best use of precious time.

The letters between Suresh and Father H were often accompanied by awe inspiring projections by Shawn Duan on the beautifully simple set created by Mikiko Suzuki MacAdams. These two elements supported each other so beautifully. A simple set was suddenly transformed into a koi fish pond, or an expansive mountain range. What struck me most was that while both these elements were bold, they never distracted or overpowered the text or the performances.. There was a beautiful unity between the script, the set, the projections, and the performances. It was such a treat to watch artists of different mediums collaborate in such an effective way.

While the script and scenic elements created such harmony on stage, I did find myself questioning some of the characters and moments we experienced on stage. In the final moments of the play, we hear directly from Father Hashimoto for the first time. This moment was tender and moving, but I did find Melody’s line about getting a picture of a person through another’s responses to their letters running through my mind. The appearance of Father H. resolved an incredible suspense I experienced throughout the play and I’m not sure his presence was the release I craved. I was unsatisfied with his presence in the play. The letter Father Hashimoto read, performed with such grace by Thom Sesma, was profound and resulted in a chorus of snifflers throughout the audience. I also felt that Melody’s journey was underdeveloped. Ali Ahn gave a mesmerizing performance and there were hints of regrets in her story. I would have loved to hear more from her, the nuggets about her life we received left me extremely curious.

My aspirations for this play are minuscule and did not affect my enjoyment of the piece. Perhaps it was Joseph’s intent that I ponder the characters and their lives after the play ended. I recognize I have a tendency to sometimes demand literalism on stage. It was refreshing and long overdue to experience a play that centers non-white stories with non-white actors. I hope that Letters of Suresh is the beginning of a long line of plays by diverse playwrights and that we can continue to see the effects of the last two years of racial reckonings of the nation played out across all stages.

Letters of Suresh is now in performance at Second Stage Theater through October 24, 2021. For tickets and more information, click here.