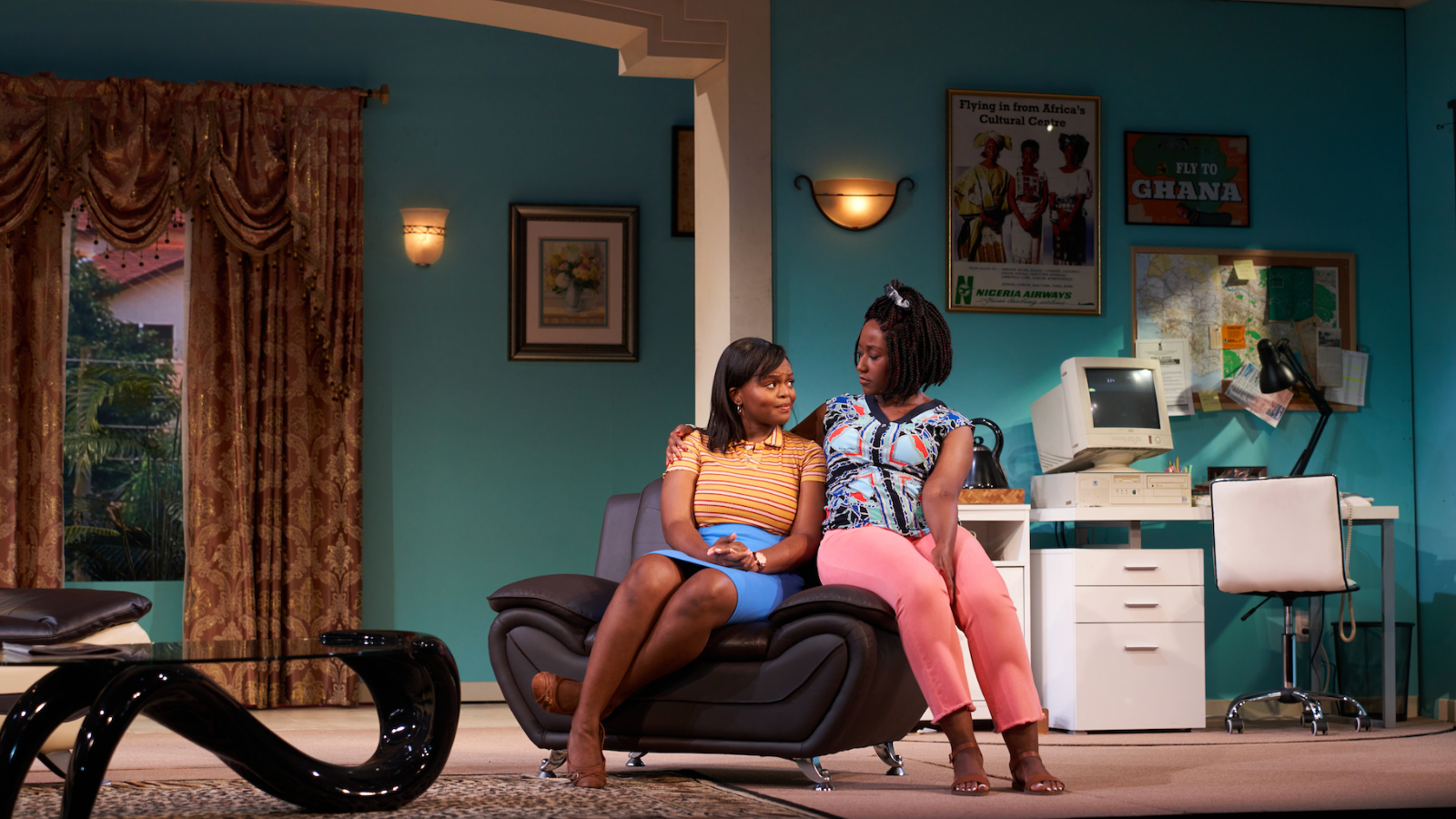 Nollywood Dreams is a simple, delightful play in which a young woman wishes to break into Nigeria’s film industry (known as Nollywood) as it booms in the ‘90s. Written by Jocelyn Bioh with wit and well-observed attention to characterization, it is not much more than that. In its premiere production at MCC Theater, though, performed by a lovable cast, it doesn’t have to be.

The sweet, level-headed Ayamma (Sandra Okuboyejo) is working at her parents’ travel agency with her tabloid-obsessed sister, Dede (Nana Mensah), when she hears about an open casting call for a lead role in an upcoming romantic drama. The director Gbenga Ezie (Charlie Hudson III) has just returned from a too-good-to-be-true stint in America, where he says Scorsese and Spielberg hounded him to collaborate, and would rather cast an unknown than his long-time collaborator, Fayola Ogunleye (Emana Rachelle). Though the news that the film will star it-boy Wale Owusu (Ade Otukoya), is what Dede starrily latches onto, Ayamma seems to just want a chance to shine on her own.

The story does not seek to reinvent the wheel. Ayamma auditions, meets the Nollywood celebrities, and goes through a series of low-stakes challenges on her journey to possible stardom. A side plot involving the director’s time overseas and history with Fayola gives Hudson a chance to accurately, hilariously play the role of ‘non-American who spends some time stateside and comes home a Learned Man.’

All of this is punctuated with glimpses of a popular Oprah-style talk show hosted by Adenikeh (Abena), a larger-than-life auntie figure who radiates charisma and natural comedy. She figures most into the first half of the play, introducing the established Nollywood stars before they enter the plot proper, and it is a technique that allows Bioh to directly weave her observations on pop culture phenomena and everyday life. Once the players are introduced, though, the story falls into familiar beats that, in its 90-minute runtime, don’t allow much chance for genuine interest. A requisite romantic subplot between the heartthrob Wale and one of the sisters starts out looking like a cruel joke on celebrity-everyman relationships, but is just an actual romantic subplot lacking detail or believability.

Despite the plot’s slight stagnation, Bioh is extremely skilled at crafting characters one actually cares about. Her dialogue is believable, refreshing, and uniquely styled to each character while remaining cohesive as a whole. While Mensah’s busybody sister and Abena’s booming television personality are dealt the flashiest cards in the deck—and to say they play them well is an understatement given the jolt of energy each one provides whenever onstage—it is Okuboyejo who alchemizes small character details from a recognizable archetype into an emotionally involving young woman with dreams as big as her heart is tender, and her mind is sharp. Her determination is sincere and infectious, and a shy flash of her expressively cheek-boned smile is more than enough to compel us to keep watching, and bridges the transatlantic gap the play finds itself straddling.

Somewhere between parody and replica of West African culture and modes of writing, the work’s existence poses a fascinating question for globalized playwrights. Born in New York City to Ghanaian parents, Bioh has a foot on each side of the Atlantic. The almost impossible simplicity of the plot’s setup, and outsized characterizations like that of Adenikeh, suggest that the work will offer outsider commentary on West African aesthetics. Its execution, though, played straight, is earnest enough to present itself as a legitimate Nigerian play, albeit a somewhat unremarkable one.

It’s an interesting place for an international artist who must deal with the polarities of both their ancestral and physical roots. This does not seem to be Bioh’s project here though it is a dialectic she embodies by sheer existence. But enough existential high-mindedness, Nollywood Dreams offers a simple premise, well-performed and charmingly produced. Insofar as one-act comedies go, it’s a dream fulfilled.‍

Nollywood Dreams is now in performance at The Robert W. Wilson MCC Theater Space through November 28. For tickets and more information, visit here.