Patrick Page Decodes Villainy in ALL THE DEVILS ARE HERE - Review 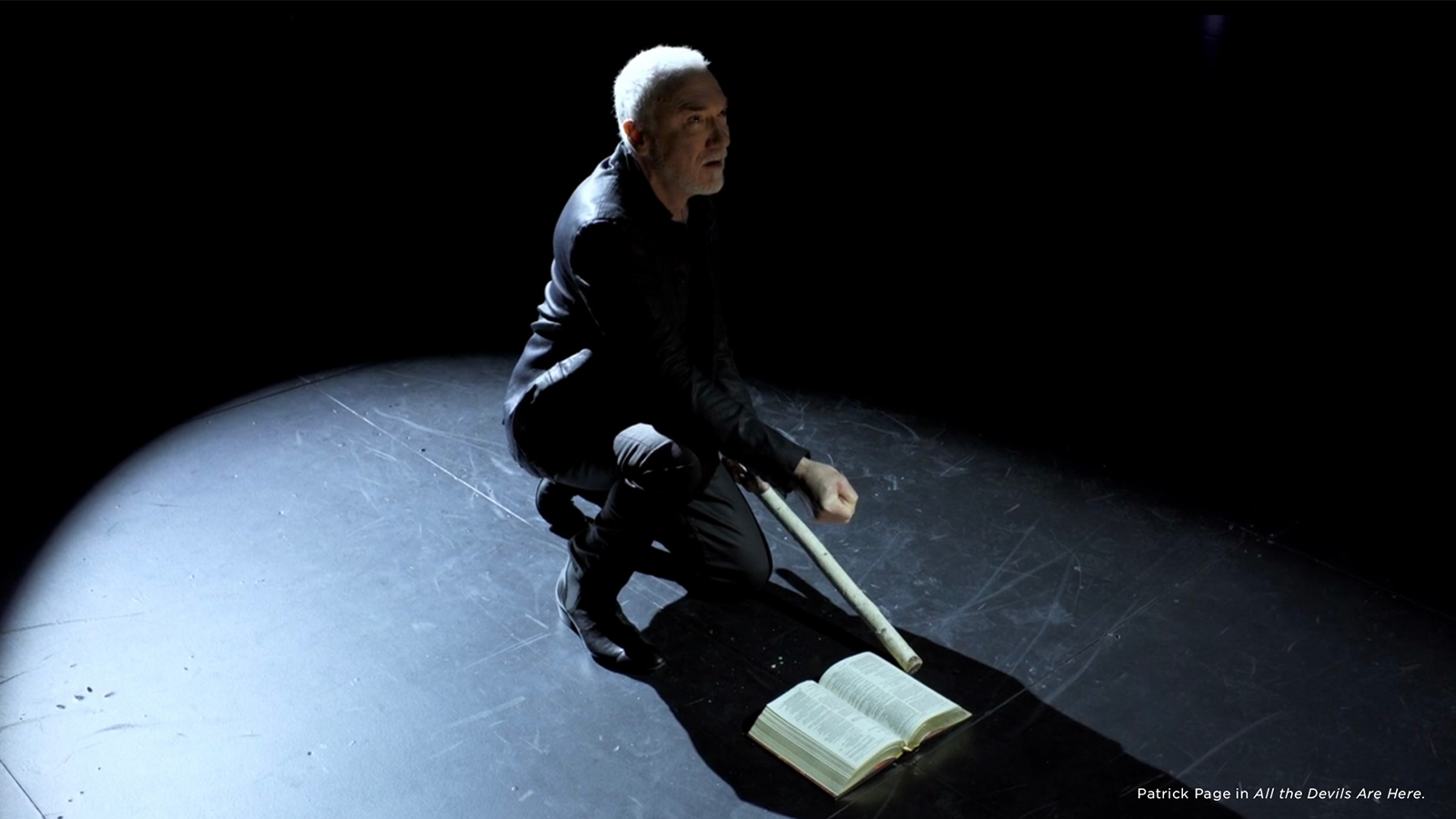 Patrick Page in All The Devils Are Here: How Shakespeare Invented Villainy, Photo courtesy of Shakespeare Theatre Company
By
Zack Reiser
No items found.
on
Category:
Reviews

“All the world’s a stage...And one man in his time plays many parts;” begins Patrick Page in the riveting All The Devils Are Here: How Shakespeare Invented The Villain  from Shakespeare Theatre Company.

In our case that one man is Page himself, who adapts and performs in this one-man virtual performance. All The Devils Are Here acts as a villain compendium of sorts, as Page walks the audience chronologically through Shakespeare’s plays while giving historical and societal context to how some of theatre’s greatest villains evolved as characters, and changed how villains are written in theatre today.

Page performs Shakespeare’s diverse set of villains with delectable ease—a rapid shift of color and a change of prop transforms him from the inhuman Vice of Covetousness of Shakespeare’s youth, to Aaron the Moor of Titus Andronicus, to sociopathic Iago of Othello.

‍
We’re taught that in Shakespeare’s youth, “the vice” as villains were called then weren’t meant to be human, rather the living embodiment of sin or evil. Where Shakespeare forever changed the game was in portraying his villains with human motivation. Page gives us examples of how that one fundamental change has shifted our portrayal of villainy to this day: Claire Underwood of House of Cards as a modern Lady Macbeth while Frank Underwood is modeled after Richard III, Scar in The Lion King adapted from Hamlet’s usurping uncle Claudius, and Stannis Baratheon of Game of Thrones and Walter White from Breaking Bad on the Thane of Glamis, Cawdor, and King hereafter Macbeth.

He also warns us upfront that some of Shakespeare’s villains were originally portrayed with many of the racist and anti-Semitic stereotypes believed at the time. Such knowledge is meant to act as a trigger warning but also to enhance our understanding of how Shakespeare subtly subverted his audiences’ and benefactors’ expectations. By giving his villains internal struggles, lofty goals, and complex arcs Shakespeare forced his audiences to question whether they would make the same collateral agreement as the Jewish moneylender Shylock in The Merchant of Venice, or reveal the uncomfortable truths of Falstaff in Henry IV, or enact the revenge of Prospero in The Tempest were they treated the same.

Filmed with strict COVID-19 safety guidelines by Film Director Alan Paul, Director of Photography Joey Ruffini, and Lighting Design from Elizabeth A. Coco, the camera and lights work in tandem to create unique dramatic playing spaces for Page’s incredible performances to inhabit. All The Devils are Here isn’t just a fascinating theatrical history lesson, but a performance masterclass that you will not want to miss.

Tickets for “All the Devils Are Here: How Shakespeare Invented the Villain” are priced at $25 and may be purchased here.