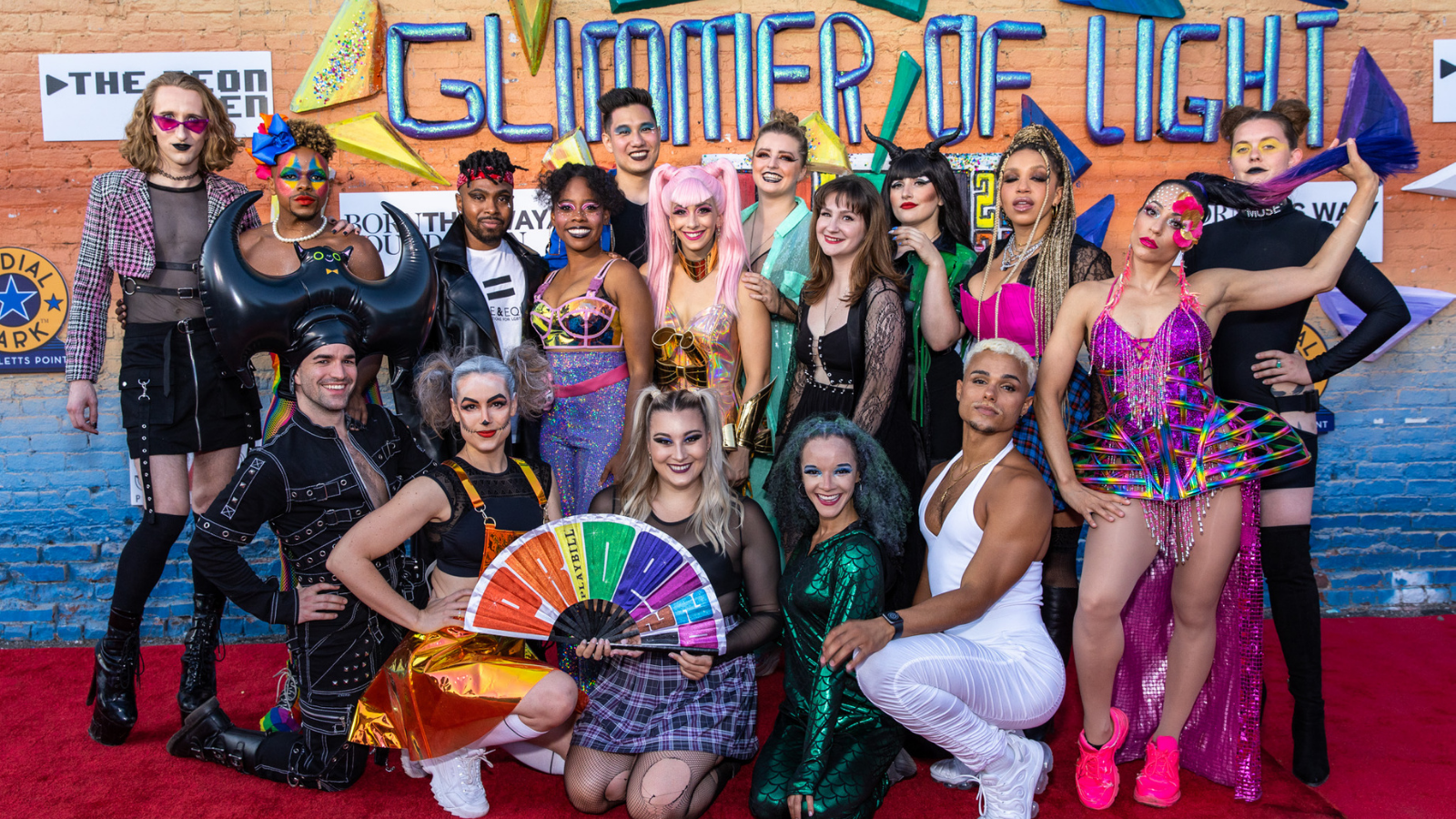 The Neon Coven on the Red Carpet | Photo: Rebecca J. Michelson for Theatrely
By
Meg Masseron
No items found.
on
Category:
News

Glimmer of Light kicked off with a star-studded red carpet, which welcomed some of the first in-person red carpet appearances by Broadway stars since prior to the shutdown. Actress Sis shared with Theatrely what she thinks about the significance of this milestone occurring at a Pride event: “I think it represents returning home and realizing you’ve got to clean it up sometimes, but having pride in where you came from and where you’ve been. Broadway is back, and so am I,” she said.

Alex Newell shared similar sentiments in a conversation with Theatrely on the red carpet: “It’s really about coming together and reflecting on where we were. We’re all new people after this last year, and now we all have to get to know each other again,” they said.‍

Glimmer of Light amassed a large turnout, and both attendees and performers were able to roam around the large lot prior to the show to browse tables set up by small theatre businesses such as Scenery Bags and Coloring Broadway, or check out the delicious snacks offered by a food truck. Radial Park provides attendees of their events the option of renting out a picnic table to bring a group of friends, or a parking spot to watch from your car, which allowed ticket holders the opportunity to create their own social “pod” distanced from other groups.

The concert (directed by Shira Milikowsky and executive produced by Bryan Campione and Leonard Rodino) featured original music and choreography by Andrew Barret Cox. The Neon Coven, dressed in a rainbow of neon costumes, brought an exhilarating, exciting energy to the stage that did not stop until the final note played. Audience members rose from their seats often throughout the show to dance and cheer along. With a stunning array of original music and performances, the audience was able to hear many songs prior to their streaming platform debuts.

At the conclusion of the event, all that attended walked home with the first printed Playbills since March 2020, a clear glimmer of hope for the theatre community as we move forward out of a dark period. Those who were unable to attend can still share this special experience by streaming the event through Playbill’s YouTube channel on June 24th at 8:00 PM, EST.

Meg Masseron is a freelance arts & culture writer based in NYC, and will soon be graduating from Marymount Manhattan College with two degrees in Digital Journalism and Theatre History. She’s passionate about theatre criticism, body positivity, musicals that debuted between 1980 and 1995, intersectional feminism, and $1 drink nights at Applebee’s. She tends to write about all of these things, save for the Applebee’s cocktails.