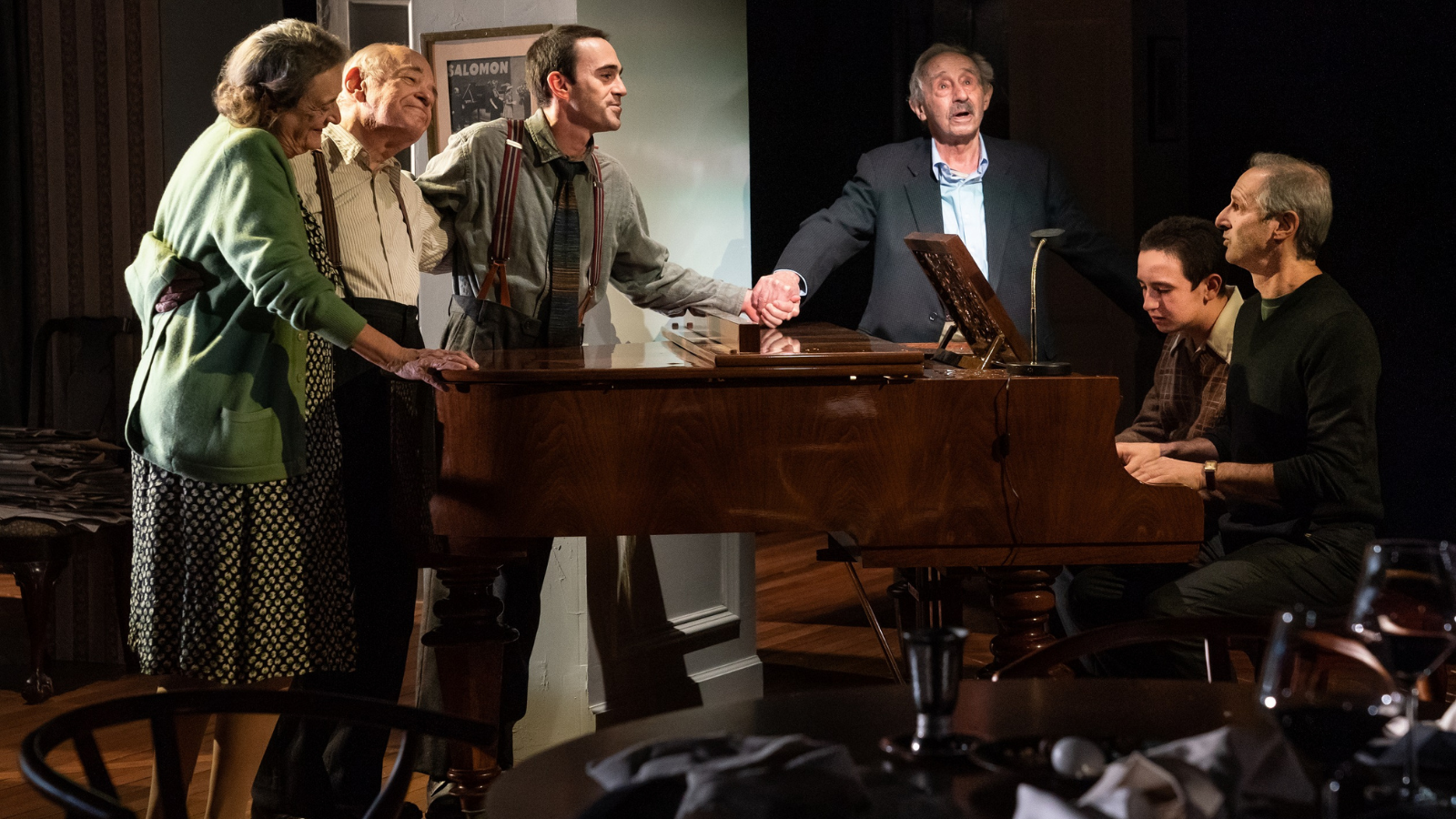 The company of Prayer For The French Republic | Photo: Matthew Murphy

Roughly midway through Significant Other, which marked Joshua Harmon’s Broadway debut in 2017, came a bleakly funny exchange. The protagonist’s grandmother begins to run through possible methods for her own suicide, seemingly unprompted and with total nonchalance. It’s startling in part because it’s oddly hilarious, as she blithely ponders: “I could drive my car off a bridge…but, I don’t own my car anymore.”

Harmon’s new work Prayer for the French Republic, now at City Center in a Manhattan Theatre Club production through March 13th, which follows five generations of a Jewish family in Paris, marks a shift to heavier drama for the celebrated playwright—but that bleakly comedic outlook remains in evidence. In the first scene, family matriarch Marcelle Salomon Benhamou (Betsy Aidem) is greeting a distant American cousin, Molly (Molly Ranson), to her home in Paris. Molly mentions that her parents’ opposed her study abroad in France due to terrorism concerns. Marcelle waves the notion away, with a tossed off: “There’s terrorism everywhere.”

In his typically dark manner, Harmon introduces themes which this excellent new play will tackle unsparingly: in an increasingly destabilized and dangerous world, what if any safe havens for Jewish people still exist?

Soon after this, Marcelle’s son Daniel (Yair Ben-Dor) returns home bloodied from an attack by strangers who called him a “fucking Jew.” His mother chides Daniel, who has grown closer to his faith, for insisting on wearing a kippah in public. In the attack’s aftermath, Daniel’s father Charles (Jeff Seymour) announces that he wishes to move to Israel, feeling the family is no longer safe in Paris. Alongside this, parallel scenes trace past generations of the family struggling through the aftermath of the Second World War.

In attacking the question of Jewish safe havens, director David Cromer’s production walks a shaky line between specificity and universality. All dialogue is in English, though it is made clear that the characters are speaking French. Takeshi Kata’s set is elegant but blank, often reading like it could be any major city. At the same time, exchanges in Harmon’s dense, debate-fuelled text center specifically on a rise in violence against Jews in Paris. Rising antisemitism is an escalating issue across the globe, but an especially pressing crisis in France.

A program note from Harmon notes that Trump’s election led him to shift the play’s focus to something more personal and closer to home. Yet French Republic is still narratively driven by the central question of escape: must this family leave Paris for their own safety? Without dismissing the danger to Jews everywhere, this does not feel like a question made geographically equal. Jewish audiences in New York are not (yet) facing the same questions as the family on stage, and some of the production’s gestures towards universality feel shaky.

At its strongest, the play uses the family’s dilemma as a springboard for larger messy, challenging debates around Jewish personhood. A second act war of words between Molly and Marcelle’s strident daughter Elodie (Francis Benhamou, superb) over Israel is thrilling to take in, and includes a signature Harmon rant-monologue. Even better is the verbal sparring between Marcelle and her aggressively secular brother Patrick (Richard Topol), who dismisses the safety concerns and suggests she simply “draw the curtains and light candles in the dark.”

That Patrick is also the play’s narrator speaks to Harmon’s uncertain attitude towards the questions he is himself posing. Within the story, Patrick at one point declares his family “barely Jews.” But speaking to us, he traces their possible roots back to massacres of Jewish people in the People’s Crusades of 1096. As he describes the horrors, Harmon’s bleak sense of humor comes around again: “They managed to kill about a third of France’s Jews, so, not too shabby!”

Patrick may be Harmon’s stand-in, but all his characters are vacillating and uncertain in assessing how much danger they actually face. Marcelle initially dismisses leaving Paris out of hand, but a rise in violent attacks changes her mind. Daniel at first wants to join his father, but then grows more hesitant after falling for Molly. When his grandfather Pierre (Pierre Epstein), a survivor of Auschwitz, appears late in the play, his words are rich with wisdom yet still provide little in the way of absolute certainty. It’s not that kind of play.

Following two utterly engrossing acts which fly by, French Republic struggles in its final section as Harmon stacks up an exhausting array of questions and opposing viewpoints. Still his refusal to answer his play’s questions with any sort of conviction is welcome, a sign of dramaturgical confidence rather than confusion—or perhaps, confidence in his own confusion.

David Cromer has, as always, a precise touch with his actors. Aidem is captivating and heartbreaking at the play’s center. Aidem and Topol’s contentious but loving sibling bond feels richly genuine. Ben-Dor and Ranson find a natural chemistry together. And in the play’s parallel Second World War scenes, longtime vets Nancy Robinette and Kenneth Tigar evoke unimaginable pain and fortitude with careful, steady restraint.

Amidst the uncertainty of the play’s contemporary story, Harmon ensures through the 1944-46 scenes that the horrors faced by Jews across generations are not lost to abstraction. The Holocaust is an almost entirely unspoken presence in the play (as Patrick ponders, albeit of a different massacre: “No one ever talked about it - what would they have said?”), but a constant one nonetheless. And the second act concludes with a wrenching tableau which says more than words could ever muster: five generations of the Salomon family, together, passing down traditions, continuing on against unimaginable odds.

Prayer for the French Republic is now in performance at City Center through March 13, 2022. For tickets and more information, visit here.