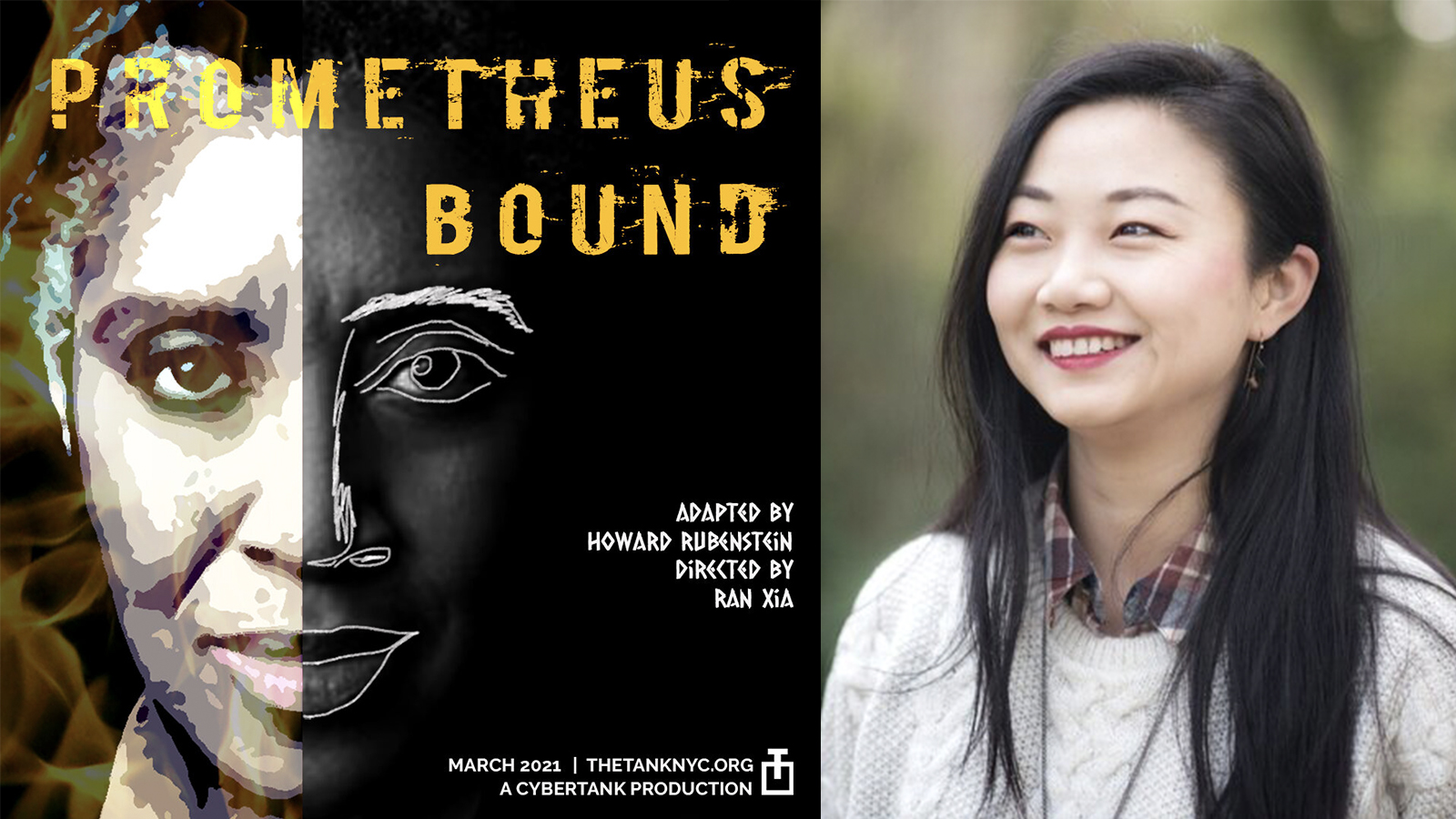 By
Zack Reiser
No items found.
on
Category:
Features

Prometheus Bound is a story that has been adapted many times in it’s 3,000 year history. Theatrely recently sat down with Ran Xia, director of a new film adaptation for The Tank to talk about why this story still holds relevance today.

Theatrely: So why Prometheus Bound now?

Ran Xia: It's kind of a complicated question in this particular incident. We originally planned on producing this as a staged production for the fall of 2020, and then we were going to postpone it until further notice because of the pandemic when it hit in March. But the playwright, Howard Rubenstein was in the middle of late stage cancer, so  in order to make sure there was a chance he could see the show before he passed we decided to bump it up and make a filmed production out of it. Unfortunately, he still passed away before the film was able to finish last October. In terms of the story itself and why Prometheus Bound now, I really do believe it is a narrative that is constantly relevant in terms of who are the people who make the sacrifice for the greater good of humanity, and for me it's really a topic that we need to constantly discuss and update. A lot of my work has to do with updating classical mythologies and narratives to fit with the current climate and the present context, and I think Prometheus Bound is a prime example of something that's worth reevaluating and updating.

T: Absolutely, and it's a three thousand year old story! What sort of message are you hoping that viewers take away after seeing your production?

RX: I hope they are able to ask more questions before they came, because, like you said, it's a three thousand year old story and there have been so many adaptations of Prometheus Bound over the years. There are a lot of preconceived notions of who this Titan God is, and who in the original story are his allies and his enemies. And I really want to challenge people's preconceived notions and perceptions of this story and the relationships between the characters within that tale, and bring that narrative to 2021, especially in the United States, as well as the socio-political climate of the world, and ask ourselves the question, "who are the Prometheuses of today?" Oh, God, I can't even pronounce that word anymore!

T: I feel that! Sometimes you just say a word so much and it doesn't feel like a word anymore.

RX: Exactly! And Prometheus is the person who sees who has the foresight and is the type of God who creates a lot of useful tools and is kind of an icon of progress. Basically the opposite of a Luddite, so I think in the spirit of that I hope people can take away that message as well. It's a constant renewal and constant self challenge of our views to the world and to ourselves.

T: Absolutely. And casting Brenda Crawley, a Black woman, as Prometheus feels especially poignant on so many layers in today's climate. Was casting all around done with the sort of intention like that?

RX: Yeah, I wanted to cast the best person for the role who fits this role of someone who is caring and someone who's willing to stand against the tyranny of what Zeus represents today. And so it was important for me to find an actor who could who could portray this role in a kind of gravitas that Brenda definitely possesses. And as a black woman, I think she also represents the people who are standing at the front lines. I remember I was thinking a lot about Stacey Abrams towards the latter half of the production period. And while we were rehearsing, every time we read through the script, the parallel between the conflict between Prometheus and Zeus is becoming more and more prominent in what's happening in reality.

T: So the film feels mostly staged like a play, but there are some moments that allow you to escape from the traditional theatre bounds. Was this filmed mostly at The Tank?

RX: Yeah, we filmed a majority of the play at The Tank's 98 seat space, but we also filmed exterior shots at the Gapstow Bridge in Central Park and we also filmed some of the prologue close-ups and Brenda's close-ups in the 56 seat black box space at The Tank. And then we also used some archive images and news footage that happened in 2020.

T: What where some opportunities that you persued not just staging this for an audience sitting in front of the stage, but for a camera that could actually get inside the action and live outside the theatre?

RX: So this is my very first film, and it was very exciting to be able to incorporate film magic and things that only a recorded medium can do. So those Brechtian moments in a play when the characters address the audience directly–sometimes when you're in a space you can feel that connection, but it's not as intimate a relationship as a close-up can do and the same level of effect that a close up in film can achieve. So I remember making the decision to incorporate that. There is a monologue of Prometheus where I asked Brenda to address directly to the camera as though she's speaking directly to Zeus. But when we watched the film we found it wasn't one hundred percent necessary to know who she's talking to, but I think that strength of the connection comes through in a unique way that theater itself can't really achieve. And I think it's exciting to bring out the best of both worlds in those hybrid productions that we can do these days. Obviously, it takes away some of the liveness of a staged play, but at the same time I was able to bring in exterior shots and then combine all the movement and the effects and allow the audience to travel with the characters through the world in a different way than if we ere confined to the theatrical space. So that's kind of new and exciting and very fun to discover.

T: And you ended up using that a little bit in Prometheus' beginning monologue where she addresses the camera directly to the audience, asking them how they want to know how she got here.

RX: Yeah, I think that breaking the fourth wall stands out in a filmed medium as opposed to being in the theatre, because it's it's more subtle when we are seeing a play. Like when The Office did that when they came out where actors turned to the camera and talk directly to people, it has a very different effect.

T: Absolutely. Did any of the staging change becoming a film production because you have to stage it not for an audience sitting in front of a proscenium but for a camera to move inside the actors' space?

RX: I knew this was going to be a film from the get go, so I staged the production with that in mind. I already knew where the cameras were going to be, but when we filmed we added more points of view because of the collaborators who had more expertise in the film world, and we were able to capture the story from more angles than I even could have imagined before. We could do a bird's eye view shot and use the jib to capture the action from a variety of angles within the same shot, which is not the kind of point of view the audience sitting in the theater can take. So that's I guess that's the difference. But in terms of where we set the house and where we set the stage those remained the same.

T: And this was filmed during sort of a big flare in COVID cases in New York. How did you handle that?

RX: We were wearing masks until the first day of filming and then we did testing every day. And even then only the actors were maskless during the time they were being actively filmed. So as soon as we yelled cut all of the masks came back on. And then the people who finished filming on day one and day two were not allowed back on the third day so that we could make sure we minimized the number of personnel present. That's also part of the reason we decided to have full masks as part of the costumes for the chorus. I really want to give a big shout out to the performers and designers and the film crew, because it was a stressful but joyous process because we did it in the middle of a pandemic and had to jump through so many more obstacles and just adapt and carry on as they come. And The Tank had pretty strict COVID protocols, I think that was the only reason why we were able to finish the thing without going into a full-on outbreak. So many kudos to everybody.

T: And live theater is beginning to reopen in New York, we're so excited for that! What we can expect to see from you next?

RX: I am directing a production of Orlando by Sarah Ruhl at Barnard College. And I also recently received the Beatrice Terry Residency with the Drama League, so I'll be working on a workshop of my own play with the Drama League for the next year or so. And Vanderbilt University commissioned a short play from me, so this fall I will also be working a little bit with the students and the director there to try to create a piece in Nashville.