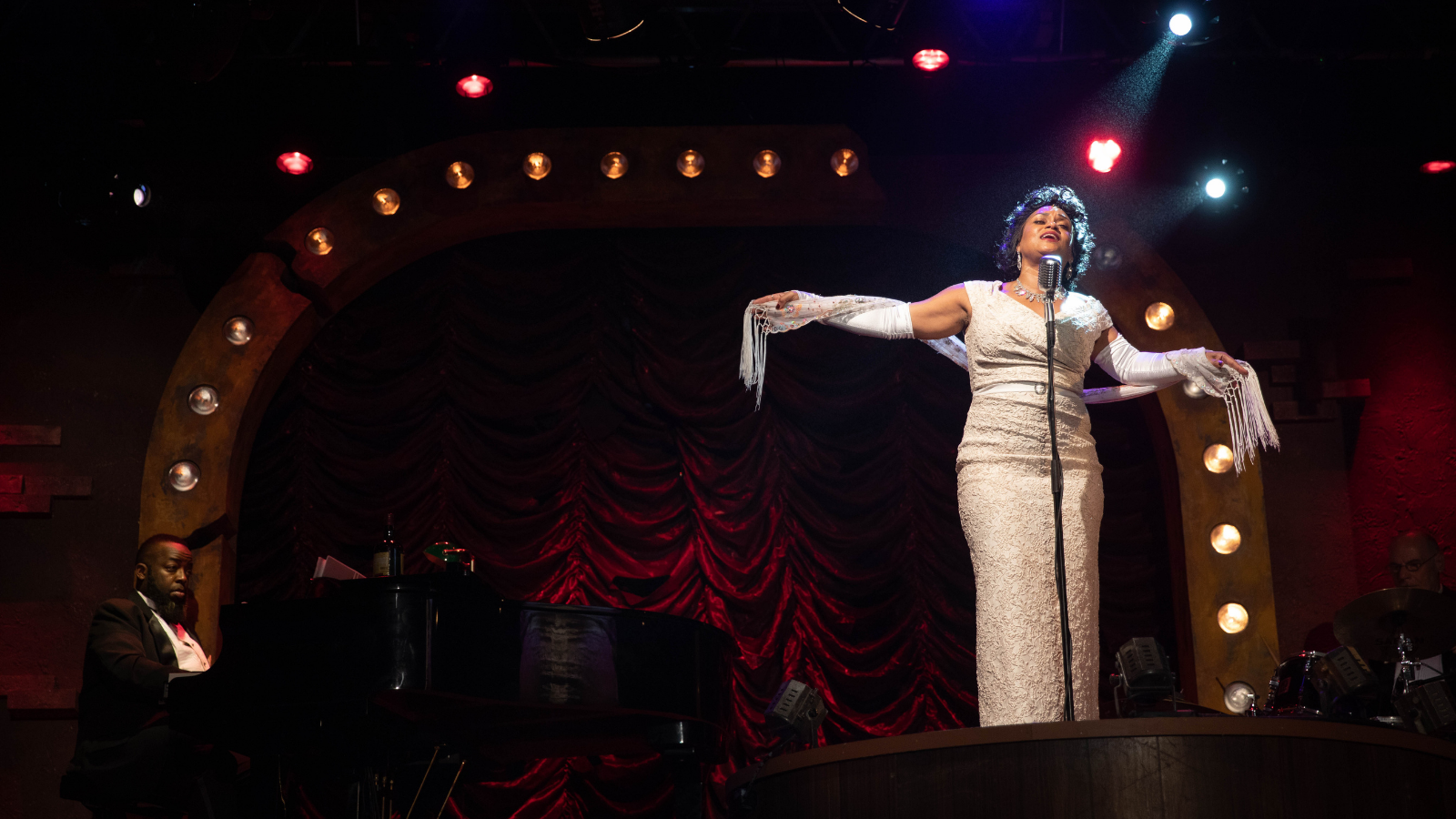 Long being an ensemble standout on Broadway in shows like The Color Purple and The Book of Mormon, Rema Webb takes center stage at The Cape Playhouse portraying the great Billie Holiday in Lady Day at Emerson’s Bar and Grill, which runs July 14 through the 24th in Dennis, Massachusetts.

Webb plays the role that famously won Audra McDonald her sixth Tony in a production directed by Shariffa Ali, who in the past has worked with The Public Theater, The New Group, Yale University, and Princeton University where she currently serves as a faculty member at the Lewis Center for the Arts. I hopped on a call with both ladies to discuss this production, how they found their way into the eyes of this icon and why this is the perfect first show back for audience members who have been away from theatre for over a year.

In Ali’s own words, “Lady Day at Emerson’s Bar and Grill is a story that takes us through the harrowing and beautiful adventure of the life of Billie Holiday, as told by Billie Holiday. In this story, we get to revisit and relive some of the highlights and iconic moments of the star’s ascent and tragic downfall.”

Taking on the role of a legend could be a daunting task for a performer of any caliber, especially someone like Holiday who is often quoted as a lifelong inspiration to present day singers. That origin story, however, isn’t applicable to Rema Webb. “I listened to her music and quite frankly, I didn't like her voice.” She first was introduced to Holiday 30 years ago when in Crawford Grill Presents Billie Holiday. “I knew nothing about her. I didn't get all the hoopla.” The more she listened to and learned about the star, the more that changed.“Her voice grew on me, grew on my spirit and I've been obsessed with her ever since.”

“The idea of her as an activist artist was my first entry point into getting to know her,” responds Ali when asked how she was first introduced to Holiday. “Some people say that she actually started the civil rights movement. I could get behind that.”

Ali was raised in South Africa as it emerged out of the apartheid era and was part of the first-generation of integrated students in schools. “In my time as a student learning about protest theater and global movements against segregationist rule, I learned about the civil rights era and even prior to the civil rights era, the incredible song of ‘Strange Fruit’ and that for me was my gateway into Billie Holiday’s incredible life and obscenely, exquisite catalog.”

Joe Grandy, Consulting Producer at The Cape Playhouse, came to Webb with the Lady Day offer, having another up his sleeve. “Joe reached out saying because it's such a massive piece of work and to be fair, to protect me, and to do right by the piece, asked if there was a director, specifically a Black woman director, that I would like to work with and Miss Ali was at the top of my list.” At this moment during the call, Ali responds with a giddy “ooooh.”

While preparing to take on this role, Webb cites hours spent on YouTube watching different compilations of Holiday during interviews and concerts to not only nail her singing voice but also her speaking voice. She also casually mentions a tribute concert she took part in, learning 23 of Holiday’s songs. “I can already walk through the door for our esteemed director, Shariffa Ali, and have at least the music completely under my belt. So that's one less thing she had to worry about for me.”

Stunned by this statement, Ali replies “imagine that. An artist who walks into the room day one, having done this immense breadth of research and preparation. Like what can you do as a director but just be in awe and try to facilitate the gift as much as you can, because that is a gift to me as well.”

Coming back to the theatre after over a year away, while exciting to both, doesn’t mean going back to “normal”. “After the reckoning that we have had both in terms of the pandemic and the racial reckoning that we've had across the country, we have to enter into creative spaces with a conscious sense of building an equitable room,” Ali states. “Back to normal, back to business as usual won't do anymore. So I think we've tried to create a conscious rehearsal process as much as we can.”

“She did the most beautiful thing when we went in the first day,” Webb says of Ali’s process. “She wrote down these rules of agreement and we sat at a table and decided how we would enter the room everyday and respect the space and communicate with each other, learn from each other and teach each other.”

Building that space not only allowed an outlet for great work, it provided Webb and her co-star/musical director Gary Mitchell, Jr., the safety to create. “It gives you the freedom and the liberation to create freely and safely. Feeling safe is huge for an actor. It liberates you to not be not be worried about yourself and just do the work without needing permission to do so.”

This production at The Cape Playhouse will not just be the pair’s welcome back to the theatre, it will also welcome back audience members who had turned to streaming entertainment since March of last year. Ali remarks that audiences can look forward to a performance that explores a full spectrum of emotions. “Rema is uncompromising and unapologetically unselfconscious in her pursuit of the truth as a performer and so anyone who gets to witness that I feel is really lucky.”

Thanks to years of connecting to crowds in clubs and cabarets, Webb is ready to greet the audience as Billie Holiday would herself: a friend. “Billie Holiday loved to be in small clubs, singing to people like they were her friends and so I’m going to treat it as such to honor her.”

Lady Day at Emerson's Bar and Grill at the Cape Playhouse runs though July 24. For tickets and more information, visit here.

Growing up 15 minutes away from Disneyland, Paul Art Smith now resides 15 minutes away from Broadway, where he can often be found with a playbill in hand at one of its many theaters. When not at a show, like this past year and a half, he can be found watching movies (most likely The Social Network), watching TV shows (most likely Schitt’s Creek) and drinking a Diet Coke. He recently graduated from Marymount Manhattan earning his bachelor’s degree in Communication Arts with a minor in Digital Journalism. If you’re ever looking to have an endless conversation with Paul, feel free to bring up any major entertainment awards ceremony and you’re set.