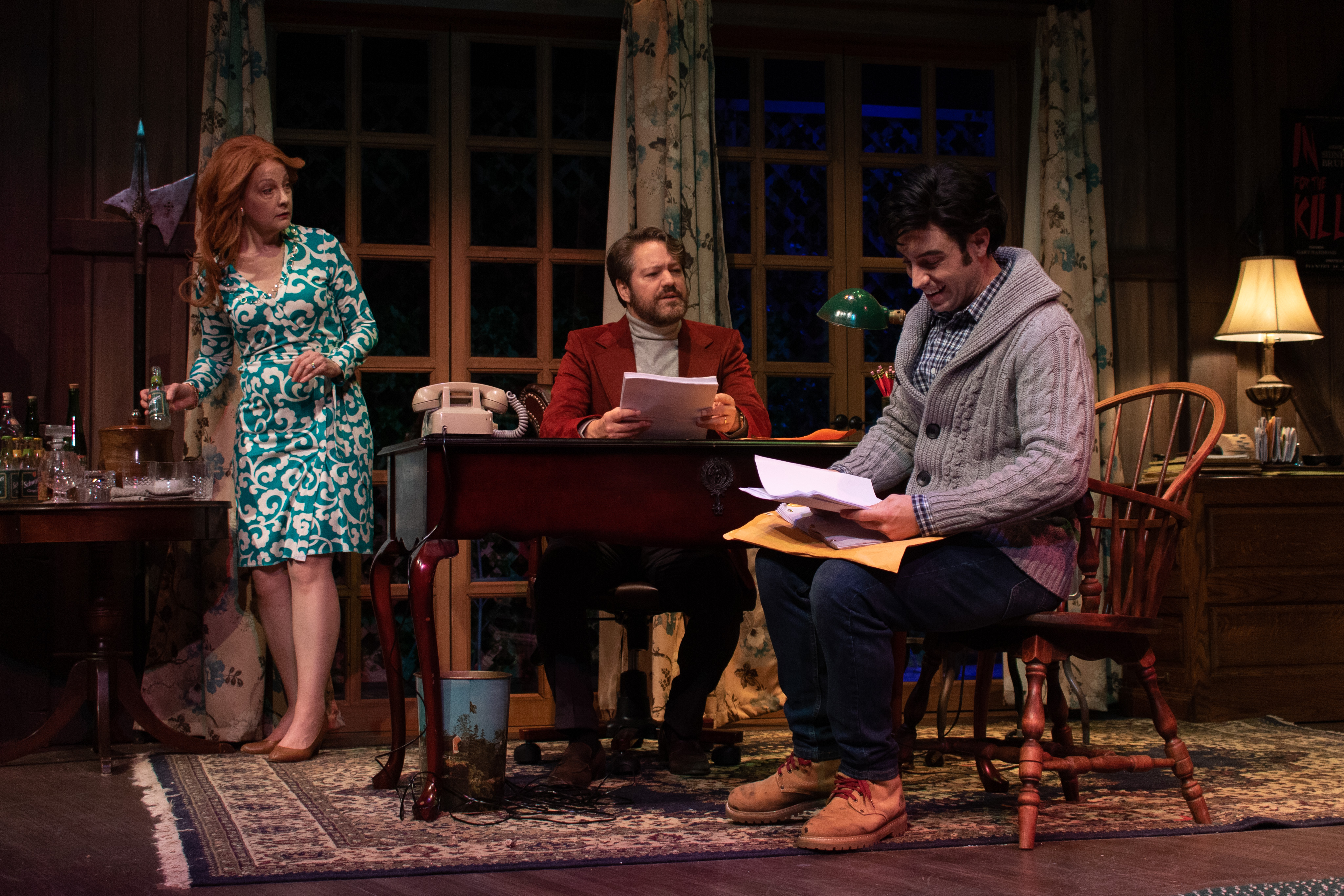 The Cape Playhouse closes their 93rd season with one of Broadway’s most successful comedic thrillers of all time.  Ira Levin’s Deathtrap is brought to life, or should I say death, in a new production mounted by Tony-nominated director, Marcia Milgrom Dodge.  Don’t worry - this review is spoiler free!

The play originally premiered right in our own backyard here at the historic Wilbur Theatre in Downtown Boston before moving on to play almost 1,800 performances on Broadway.  Deathtrap also found success in the 1982 film adaptation starring Christopher Reeve and Michael Caine.  Set in a stylish converted stable turned house in Westport, CT, the play opens with a down-on-his-luck playwright, Sidney Bruhl, who cannot seem to write a new play for anything.  He and his wife Myra have been living off her family money and are quickly running out of options until up-and-coming playwright Clifford Anderson writes a new hit that lands on Sidney’s desk.  They joke about murdering Clifford and taking the play for themselves...and I won’t go into any more detail - you will have to head out to the Cape and see what happens for yourself!  Along the way we also meet Sidney’s lawyer, Mr. Poter Milgrim, as well as a kooky European named Helga with mystic ESP powers who can predict the future.

Robert Petkoff plays Sidney with sneeringly eerie comedic timing.  He beautifully assumes the role with a fervor that continually keeps the audience guessing who he really is. Petkoff shines in this role masterfully finding the nuances of the layered character.  Robbie Simpson as Clifford brings a youthful, dapper, devious presence that fleshes out his character.  My favorite of the evening was Susan Wands’ Myra.  Ms. Wands’ neurosis is delectable to watch - she gives one of my favorite performances on the Playhouse stage I have seen in recent memory. Dathan Willaims delivers a solid performance of Porter Milgrim while the alluring Ms. Alison Fraser brings the funny with her Dutch clairvoyant character Helga ten Dorp.  No stranger to the Broadway stage, Ms. Fraser steals the show with one of the most eccentric characters I have seen.

Deathtrap is one of the most self-aware, meta theatrical experiences I have ever had.  With twists and turns around every corner, it is hard not to revel in the beauty of this 40-year-old piece.  That being said, it is most certainly a period piece with nods to Merv Griffin and rotary phones; it will be interesting to see how long it can last - part of the script does feel dated at points.

Set designer Michael Schweikardt has created a devastatingly gorgeous house that fits the storyline to a T.  Major props to Joe Palermo who has concocted a brilliant sound design that is perfect balance of creepy and comical.  His thunderstorm in Act II is one of the most impressive I have heard on a stage.  Nods as usual to rest of the team including Gail Baldoni on costumes, Jaron Kent Hermansen on lights, and Rick Sordelet as the fight director.

There is something to be said about the genre of thrillers on the stage.  You can experience horror in many forms, from TV, podcasts, and of course movies - but nothing can compare to when you are sitting in the room.  Deathtrap will have you screaming in fear just as loudly as you are ‘die’-ing of laughter!

PS - How many times can we say it...please don't text in the theatre...it's just rude!

“Deathtrap” is playing at the Cape Playhouse now until August 31st.  Get tickets here: www.capeplayhouse.com

$25 Student Tickets are available in person at the box office depending on availability.