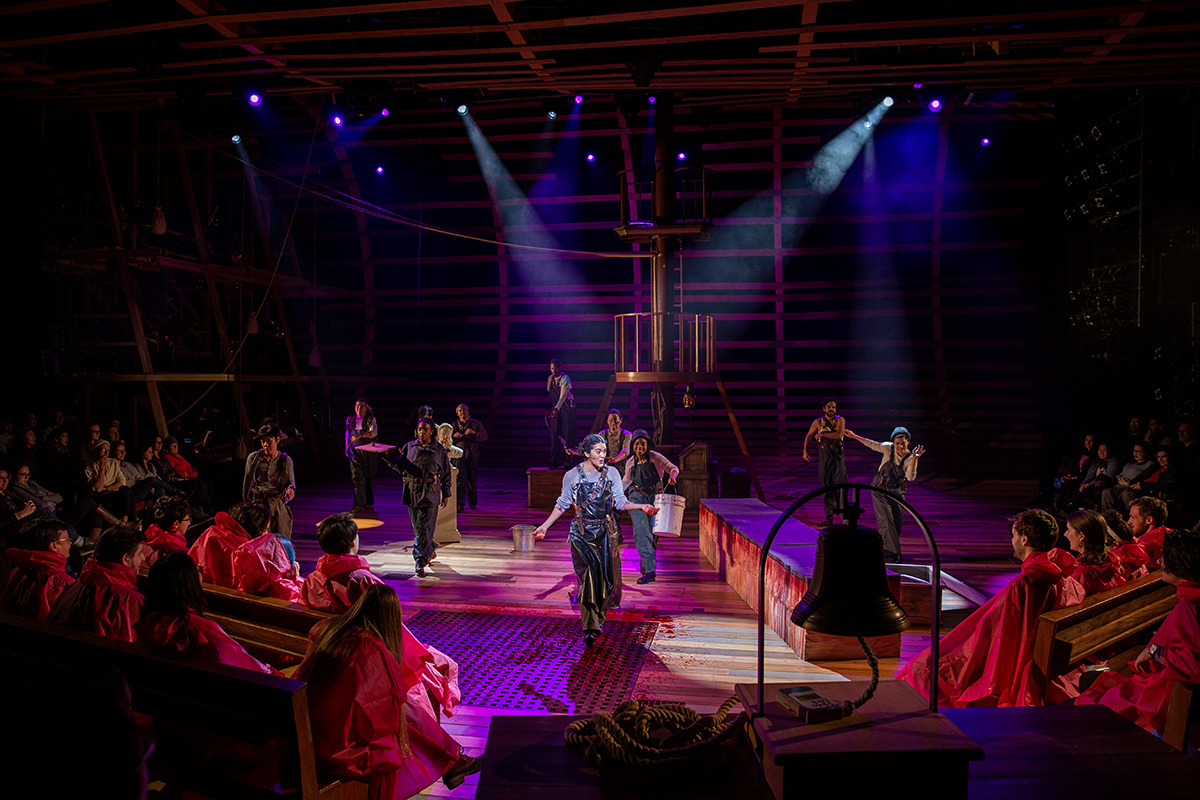 Members of the cast of Moby Dick | Photo: Maria Baranova
By
Kobi Kassal
No items found.
on
Category:
Reviews

We are all in the belly of the whale, er should I say the Loeb Drama Center here in Cambridge. The American Repertory Theater is home to the world premiere of Dave Malloy’s newest musical Moby-Dick, which is being billed as “a musical reckoning,” and boy is it so.

Herman Melville’s “Moby-Dick; or, The Whale” is often viewed as one of literature’s greatest achievements, so it only makes sense Malloy has decided to tackle this classic American novel as his next project. His last project at the A.R.T. was Natasha, Pierre, and the Great Comet of 1812, which held its out of town tryout here in 2015 before a run at the Imperial Theatre on Broadway.

Malloy has once again teamed up with Tony-winner and Great Comet director and collaborator Rachel Chavkin to bring the world of this mythical beast to life. Split into four distinct and varying parts, we explore the 135 chapters in Melville’s book. Similarly to the variety of varying structures of chapters in the novel, the creative team plays with the musical genres switching from Broadway to hip-hop to jazz. Malloy has produced a haunting score with nautical melodies interwoven throughout. Matched with Mimi Lien’s beautifully simplistic set, the immersive thrust staging of Pequod consumes the entire space and make everyone feel they are on board.

Much as in the original novel, we see the journey to conquer Moby Dick as narrated by Ishmael, played by the delightful Manik Choksi, also a Great Comet alum. His endearing, nerdy charisma guides the audience throughout the almost three and a half hour show. While addressing the audience directly, Ishmael seamlessly floats in and out of the story–at one point Choksi gives a shout out to puppet designer Eric F. Avery. Tom Nelis bring’s the manic intensity necessary to Captain Ahab, whose quest it is to kill the giant white whale. Starr Busby, Kalyn West, and Anna Ishida star as chief mate Starbuck, second mate Stubb, and third mate Flask respectively. Each get their shining moment, from Busby’s gut wrenching soliloquy to West’s wild vaudevillian song on all the ways to cook and eat a whale.

Another major focus of the novel is the other ships that Ahab and his crew encounter on their journey. Chavkin and Malloy made the decision to have all of these ships and their passengers played by one actress, Dawn L. Troupe. A standout of the night, Troupe’s singing is unparalleled, and particularly as one of the ships you can feel the anguish in her plea to Ahab to help save her son. I also rather enjoyed Andrew Cristi as Queequeg, who has a hilarious toe-tapping number early on about his cannibalism. In this adaption, Malloy explores the homoerotic relationship between Queequeg and Ishmael and delivers a lovely rapport between the two characters that is clearly present in the original source material.

While you only have until January 12th to see Moby-Dick at the A.R.T. the future of this show is bright–I think I am safe to say you might see it set sail to New York soon. Leave your life vest at home and come meet the whale that will have novel enthusiasts and theatrelovers alike talking for years to come.

"Moby-Dick" is currently playing at the American Repertory Theater until January 12, 2020.

Tickets start at $25 and can be purchased at www.AmericanRepertoryTheater.org