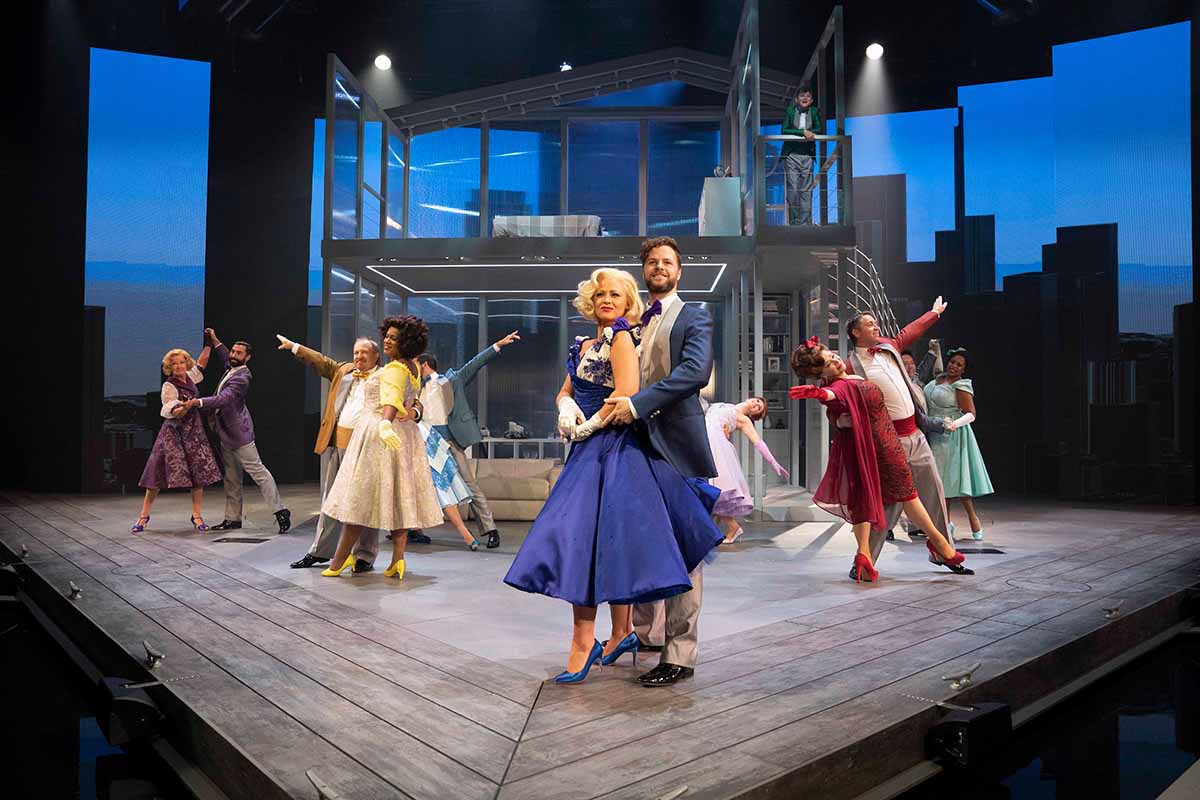 With the current state of the world, live theatre starting to come back is like a hope-filled, sweet dream come true, just like Sleepless: a Musical Romance. Although the show had originally intended to open March, this new musical instead premiered September 1st. An adaption of the classic rom-com “Sleepless in Seattle,” Sleepless stars Jay McGuiness and Kimberley Walsh, who both made their start in pop music, as the two leads. They were perfect matches for the material, and their chemistry was the bow atop this romantic present of a show.

This production is among the first to open in London since the shutdown of live theatre due to the COVID-19 pandemic, and the staff has gone above and beyond to help make sure safety precautions were in place so everyone could enjoy the show without having to worry about our health and safety. Upon arriving at London’s Troubadour Theatre at Wembley Park, we had our temperatures checked by staff before entering an outdoor garden space where we could enjoy our socially distanced pre-show drinks. Ushers were wearing not only face masks, but also gloves and custom Sleepless face shields, which were also handed out to audience members for increased safety. We then entered the theatre to take our seats to then find that the seats surrounding each “same social bubble” group of attendees were blocked off. Not only was it nice to have no one directly to my right, it was nice to not have to risk someone behind me kicking my seat or having someone tall sit directly in front of me—the dream of short theatre-goers everywhere! With an unobstructed view, the lights dimmed, and the show began.

Sam (McGuiness), a father who is still recovering from the loss of his wife, is blind-sided one night when his son calls into a radio station to encourage Sam to talk about his love for his late wife. After opening his heart on the radio, women across the country swoon and begin to write to Sam, hoping to win his sensitive heart. Receiving hundreds of letters from women who want to be with him, including one from Annie (Walsh), a writer living on the other side of the country in Baltimore, Sam must figure out where his heart is taking him and Jonah. The story of Sleepless focuses on Sam and Annie’s journey of love, loss, fate, and destiny.

Sleepless follows a perfect recipe and yields a wonderful production. The set design was fun and helped move the story forward without being overly complex. The usage of water, lights, and a rotating centrepiece allowed for quick changes in scenery, important for a show that simultaneously takes place in Seattle and Baltimore.

The writer of Sleepless, Michael Burdette, and its composers, Robert Scott and Brendan Cull, know how to pace a show correctly, making sure to be clear and concise with the story while also moving it forward. Not a single song in the show seemed unnecessary; each clearly told the story and developed the characters. Because of this, Sleepless is a show the whole family can enjoy, without worrying about kids losing interest or struggling to follow along.

The music and lyrics were both charming and able to elicit different sets of emotions when needed. While silently sobbing to McGuiness’s heart-wrenching tale of the reasons he loved his late wife in “Everything,” we quickly change gears in the following number, “Dear Sleepless,” where Leanne Garretty, Charlie Bull, and Dominique Planter have the audience in stitches while singing about why their characters around the country should be Sam’s new wife.

McGuiness and Walsh are both standout performers, and despite the fact that the characters only interact for a total of about 10 minutes at the end, you could feel the connection between the actors building throughout the show. Walsh delivered raw emotion mixed with humour, that not once felt forced for an awkward audience laugh. McGuiness was delightful and showed that he’s not just a singing and dancing powerhouse, but an acting one as well. For this performance of Sleepless, Jobe Hart played Sam’s ten year old son Jonah. In act two, Hart partners up with Cory English, who plays Sam’s best friend Rob, for the musical number “Now or Never,” which is full of high calibre dancing and singing between the two and left the audience in thunderous applause. Hart and English filled the room with energy and life and had us believing this was their story.

While the original movie Sleepless in Seattle may be from a time before iPhones and Facebook, this new theatrical remake of the 90’s film feels just that—new. This isn’t merely a wonderful show with the current circumstances, this is a wonderful show point blank. The show not only has amazing talent in every role, but this production fills the audience with energy and hope, two things we need to hold on to right now.

Although the two of you may have been apart these last few months, Sleepless is the perfect musical to rekindle your love affair with live theatre.

Sleepless will be running at the Troubadour Theatre at Wembley Park in London through September 27th. For tickets and more information, please visit https://www.troubadourtheatres.com/wembley-park/whats-on/sleepless-a-musical-romance.

Originally from Boston, Caroline currently resides in London, taking full advantage of having the West End right at her doorstep. Her love of theatre was ignited at age thirteen when she landed the lead role of “Rosie” in her school’s production of Bye Bye Birdie. Caroline is an avid Queen fan, fencer, mac and cheese enthusiast, and Veronica Mars aficionado.