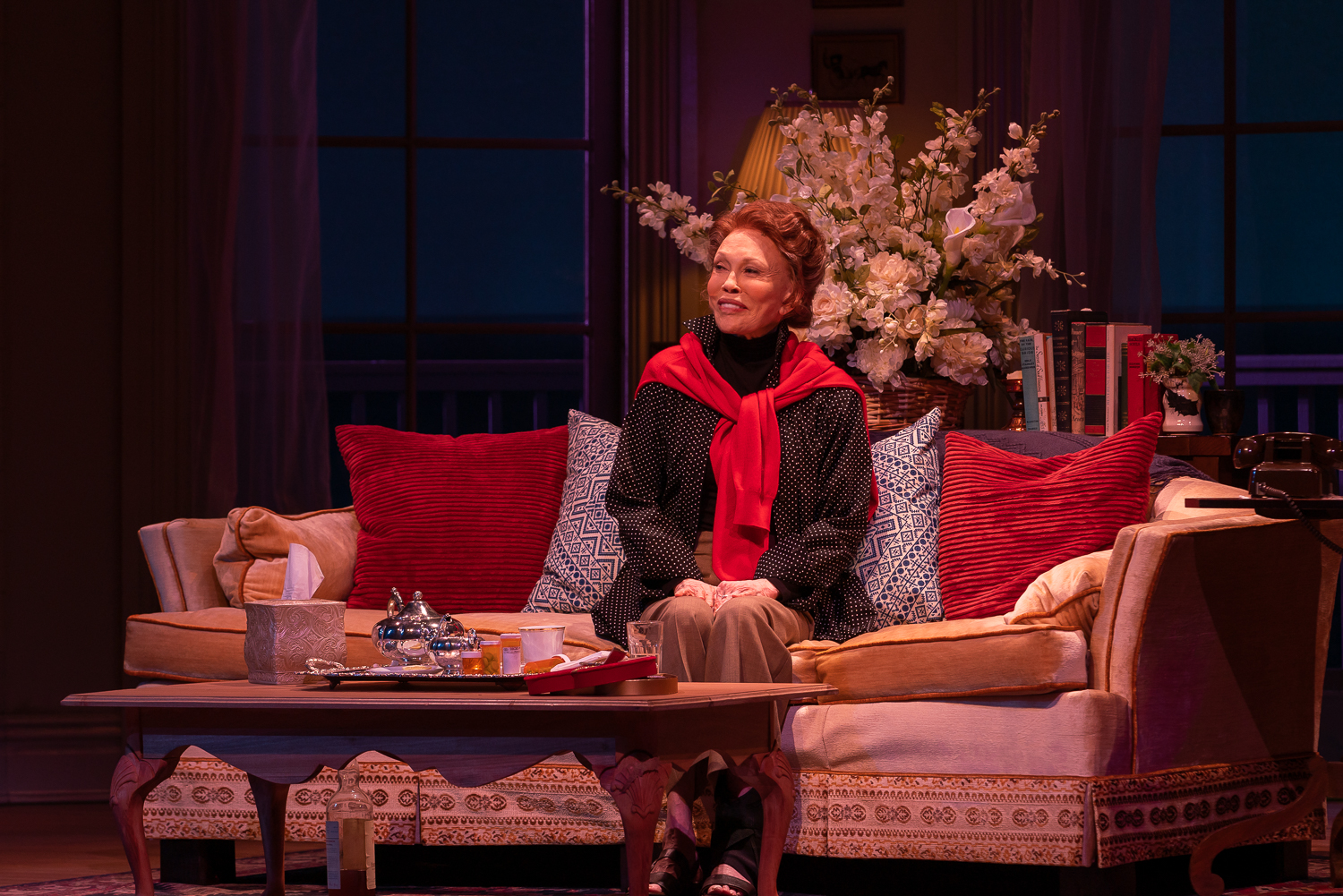 I do believe the tea has gone luke-warm; that being Tea At Five which opened last night at the Huntington Avenue Theatre here in Downtown Boston.  Star of stage and screen Faye Dunaway takes on the iconic Katherine Hepburn in this 75 minute one-woman show.

Playright Matthew Lombardo (whose Who’s Holiday we can’t wait to come back) retooled his original play written in 2002 specifically for Ms. Dunaway, condensing it into an one-act that examines Hepburn’s life after a car injury in 1983 with her early onset Parkinson’s disease.  The original play was two acts, the first examining Hepburn at age 31 and Act II at age 76.  In this new version, Lombardo mashed everything together and shortened it but I continue to wonder if this was the correct choice.

Tea At Five is no stranger to the Boston theatre scene.  One of the first productions was back in September of 2002 at the American Repertory Theatre.  It also had a run in December of 2004 at the Shubert Theater. Now almost 17 years later, the one-woman show returns but begs the question - do we need this now?

The play beautifully weaves together moments of Hepburn’s life from career highlights and failures to her 26 year love affair with actor Spencer Tracey.  Lombardo sprinkles in charming anecdotes throughout the story that helps connect the bigger topics.  Adapted from her personal memoir, this portrait of one of America’s greatest actresses is a fascinating reflection of her life.  For those musical theatre fans, there is a great tale of Hepburn and Stephen Sondheim as neighbors while he was writing his hit show Company.

Director John Tillinger, who has been with the show since its premiere back in the early 2000s now has the pleasure of working with Oscar, Emmy, and Golden Globe winner Dunaway.  Now at the age of 78, it has been almost 40 years since Ms. Dunaway has graced the Broadway stage.  It was clear that Ms. Dunaway was having some trouble with her lines that she flubbed a few times throughout the night.  Her ping-pong movements from one end of the stage to the other got mundane at points. Despite all that, Ms. Dunaway puts her heart and soul into the piece and plays Hepburn with heart and a fervorous passion.  Her emotion shines in the monologue where Hepburn reflects on her brother’s suicide.  It is always a delight to see Dunaway back on the Boston stage, where she started her wonderful career many years ago.

Scott Pask has done a breathtakingly beautiful job of creating the world of Old Saybrook, Connecticut with the stunning interior of Hepburn’s house.  Complimentary lighting was nicely done by Kevin Adams - however there were points where the lighting shifted up and down throughout a scene, which was distracting at times.  Jane Greenwood for costumes and Tom Watson for hair and wig design all did an admirable job.

The show is currently slated to open on Broadway later this Fall.  If the transfer happens, it will certainly be interesting to watch how it lines up with the rest of the 2019/2020 season which is already shaping up to be an exciting one.  Ms. Dunaway has taken her sip of the tea, to which we say...cheers.

"Tea At Five" is playing at the Huntington Avenue Theatre now until July 14th. Tickets: www.bostontheatrescene.com