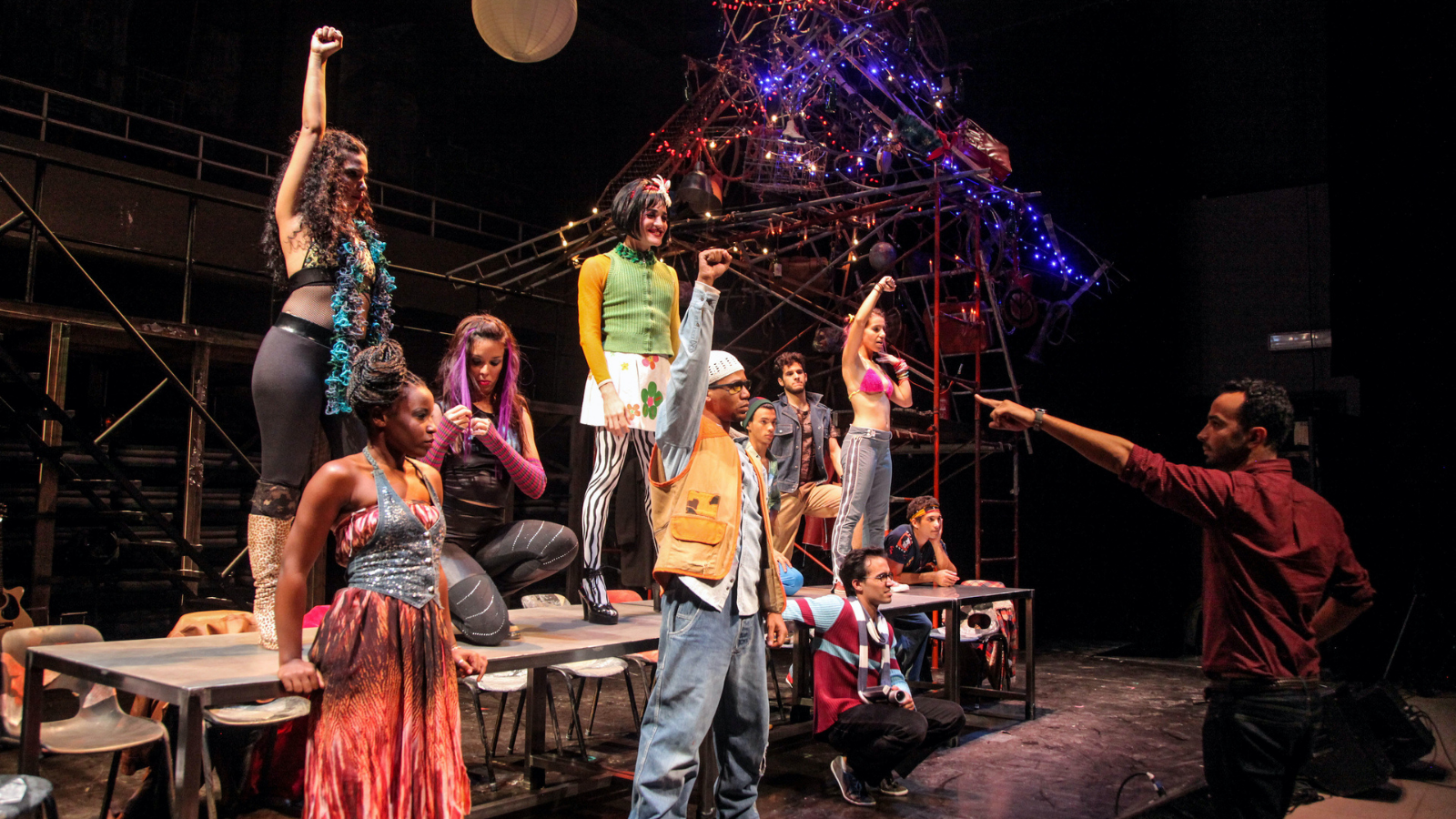 Andy Señor, Jr. and the cast of RENT in Cuba | Photo: Carlos E Gonzalez/HBO
By
Juan A. Ramirez
No items found.
on
Category:
Features

If there were any person to spearhead a Spanish-language production of Rent in Havana, it’d be Andy Señor Jr. An early ‘Angel’ replacement in the musical’s original Broadway run and subsequent word tours, the Cuban-American actor has worked across several productions in the 25 years since the show first premiered.

In 2014, after cultural exchange laws between the United States and Cuba loosened up, Señor directed the first American-backed theatrical production in Cuba in over 50 years. Translated into Cuban Spanish, the show sold out nearly its entire run. In 2019, Revolution Rent, a documentary he co-directed with Victor Patrick Alvarez about the experience, made brief festival rounds before the pandemic forced it into the shadows.

After being picked up by HBO, the film premieres on the network today, providing a glimpse at the cultural hurdles Señor overcame in bringing the landmark stage show about measuring life in love during New York’s AIDS crisis to Cuba.

“Nobody was going to Cuba at the time, this was pre-normalization,” Señor told me on a recent Zoom call. “I knew I would have to bring footage back so my family could see what the experience was like. I thought, ‘Maybe I'll create a little something I could share on some Broadway websites.’ As soon as I started to get to know the actors and how closely their lives reflected the characters they were playing, I realized I had a real documentary.”

While working on the production, which played Havana’s Bertolt Brecht Cultural Center from Christmas Eve, 2014 through March, 2015, the cast was invited to perform “Seasons of Love” as a goodwill showing during former US President Barack Obama and former Cuban President Raul Castro’s negotiations to renew diplomatic relations.

Señor believes these conversations mirrored the ones happening among Cuban-Americans about their complicated feelings towards their homeland. At the start of the film, the director is seen arguing with his family, which was mostly opposed to his going to work in Castro-era Havana.

“My brother-in-law told me it wasn’t going to make a difference of any kind––and I didn’t; not on the scale that he was talking about,” Señor said. “At the same time, my intention was that if I could affect a small group of people, I’d have done my part––and that did happen. I think wherever you are on the political scale in your relationship to Cuba, you see yourself in the film and your points are validated.”

A particularly emotional scene in the documentary sees Zammys Jiménez Denis, who played Maureen in the production, screaming for “libertad!” during rehearsals intercut with footage from violent government retaliation at local protests.

“There is a need for normalization, and you see in the film why and how that makes a difference,” Señor said. "But when she is having the whole ‘libertad!’ moment, it sort of validates the Cuban exile argument. A lot of people talk about Cuba that don't know anyone there and have no relationship to anybody there. When you start understanding and knowing people there, and have a specific face to deal with, it's a game changer.”

While Señor hopes Cuban residents will be able to watch Revolution Rent, he is uncertain of its availability in the country, with its strict censorship laws.

“You never know,” he said. “[Government officials] may see it and be like, ‘We’re never going to show this here.’ I’m hoping positively; they know my heart and they know my intentions. I would love for Cubans, for the cast members that are there, and their families, to be able to see it. I know they're anxious to see it.”

Like most immigrants from diasporic nations, Señor attuned to his home country’s way of life, believing the film might eventually make its way to the country through any means necessary. “Knowing how things work in Cuba, they'll probably get it this weekend in el paquete,” he said.

“El paquete is basically a small service fee that you pay over there,” Señor explained. “You show up at some guy's house with your thumb-drive, put it into their computer, and download all the different movies and music streaming right into your thumb-drive. For me, being on el paquete is like, ‘I’ve made it in Cuba.’ It reaches a lot of people––it would be so underground, and so Rent.”

Señor said that, though he is now in talks to begin work on new Cuban productions, plans to keep Rent’s momentum going were halted by a change in US politics.

"When the Trump administration took over, a lot of the policies changed regarding intercultural exchange,” he said. “That was the last musical done in Cuba. We were going to do another one, and then policies changed.”

Seven years after the production closed, Señor, who has worked as an associate director on shows like On Your Feet!, said he is no longer interested in importing American material.

“I want to create something that tells our own Cuban stories,” he said. “I’ve been involved in a lot of musicals from scratch, and I want to take what I've gotten from my Broadway experiences and create our own musical that tells Cuban stories.”

For now, Señor is busy promoting the documentary. Despite having its proper release delayed by almost two years, he believes it comes at the perfect time.

“I think the fact that the film is coming out on Pride Month, on Rent’s 25th anniversary, riding the hurricane that is In the Heights, and with what's going on in Cuba with different artists being persecuted and imprisoned, it's the perfect time for the film to come out,” he said.

Last month, artist Luis Manuel Otero Alcántara was imprisoned over a hunger strike protesting the government’s confiscation of his work. Amnesty International named him a prisoner of conscience shortly thereafter.

“It’s a perfect time for Rent to resurface, and I'm excited about that,” Señor said.

Revolution Rent airs tonight at 9PM on HBO, and will be available to stream on HBO Max.