SANDBLASTED Gets Lost In The Wind — Review 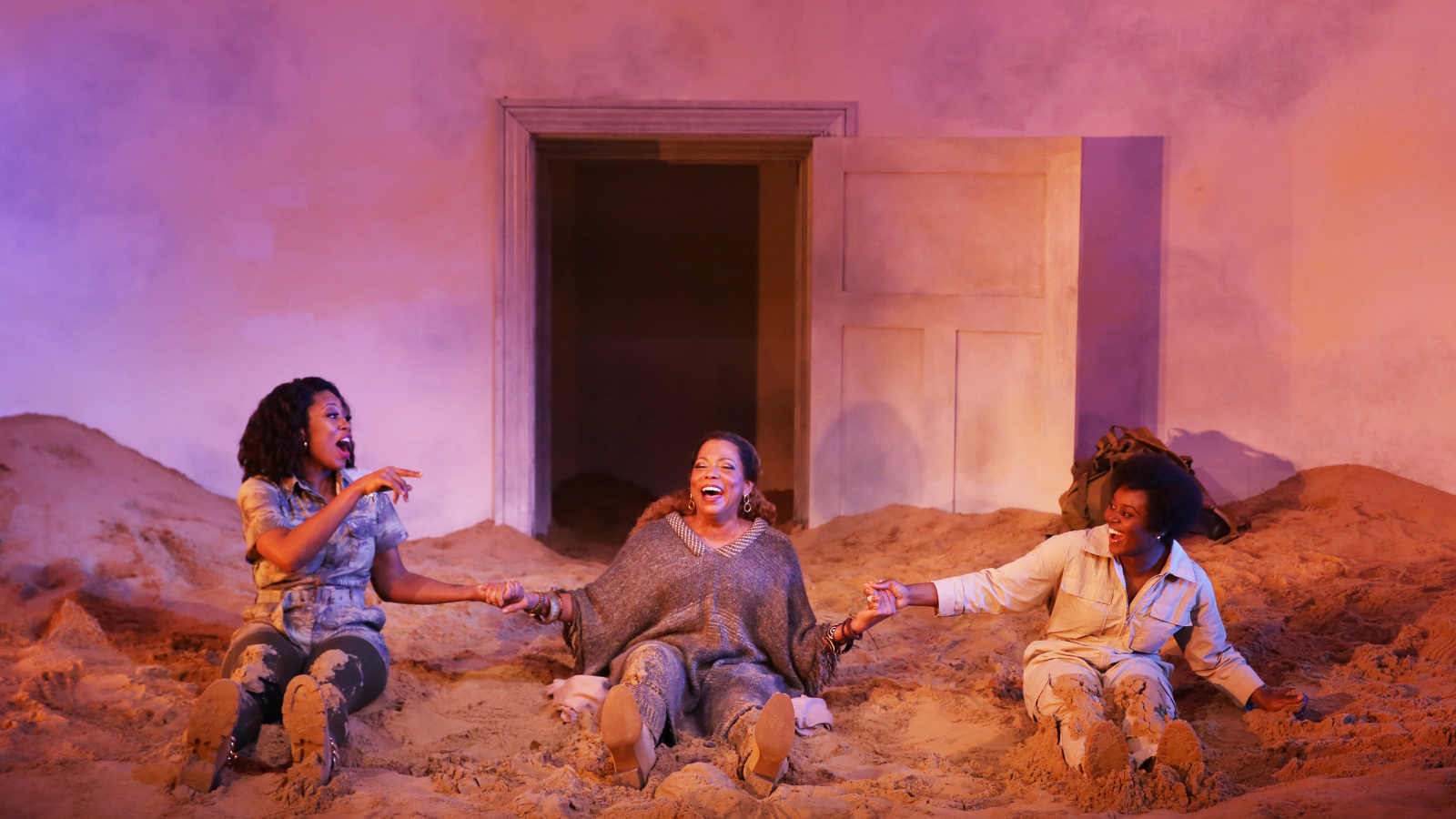 sandblasted’s opening image is equal parts hilarious and terrifying. In a stark space half-filled with sand, two Black women emerge from behind beach umbrellas. They shake sand out of every crevice. Then, one of the women’s arms falls clean off of her body.

It’s an alarming, delightful introduction to the world of Charly Evon Simpson’s semi-apocalyptic play. Sadly, the evening won’t hit the same heights of bizarre wonder again in the 100 minutes that follow.

sandblasted follows Angela (Brittany Bellizeare) and Odessa (Marinda Anderson) in a sand-clogged dystopia of unspecified time/place. The meandering narrative follows the pair’s search for Adah (Rolonda Watts), an author and motivational speaker miraculously unaffected by the affliction which is seeing other Black women lose body parts at random. The two hope Adah might hold a cure to rescue them from the same fate.

That’s the rough outline. Plot isn’t the focus of Simpson’s absurdist work, but what story there is proves difficult to follow. First Angela and Odessa are searching for Adah; then we see Adah with them, guiding through healing practices; then the two are searching again. Simpson is jumping around in time, but that isn’t made clear—at first, I thought Bellizeare and Anderson were doubling as different characters.

Matt Saunders’ set is partly to blame for the confusion. The sandy space is initially striking, particularly a gorgeous cloudscape floating above the dunes. But it cannot morph or shift in the ways the play requires. It’s rarely clear whether we’re indoors, on a beach or in a vast desert, differentiations that are often key. Hobbled by the limiting design, director Summer L. Williams struggles to convey the basic whens and wheres of Simpson’s text.

Language is meant to be the focus rather than plot, and in this regard the play is more successful. sandblasted is a lyrical piece that delves into Angela and Odessa’s search for healing through mostly abstract, poetic dialogues. Some of the words sing, particularly when Odessa is overwhelmed by anxiety but struggles to convey her panic to a baffled Angela: “I want to cry and scream/and yell and cry and be held/and hit people away.”

Yet some of Simpson’s language is vague to the point of meaningless. An early debate on what it means to “fight for your life” hits on resonate themes, particularly for Black women surviving in a world which commits daily violence against their bodies—and, for anyone seeking a balance between self care and confronting injustice. In this play’s world though, what does it mean to fight or not fight? The threat of falling limbs is mentioned less and less with each scene, and the duo’s quest grows increasingly amorphous. Of course that external threat was just a metaphor, but there is no compelling internal journey to replace it.

Bellizeare and Anderson are a warm, lively duo, and keep the play’s energy up even as their dialogue grows repetitive. The two often have to resort to mugging to wring laughs out of Simpson’s text, which is only half-heartedly a comedy. Rolonda Watts has a fittingly polished presentation as Adah (unsurprising given Watts’ own background as a talk show host and motivational speaker) but doesn’t find her core. She delivers Adah’s central monologue crisply but without passion. Andy Lucien is sweetly hapless as Angela’s brother Jamal, but the character serves little purpose and disappears in the play’s second half.

sandblasted finds some gently moving moments in its final scenes, as Angela and Odessa settle into an understanding that their search for peace and healing may be unending. If the play’s final image is poignant, it still feels undermined by dramaturgical confusion—I struggled to figure out if one character was meant to be real or imagined by this point. Simpson is a talented playwright with an exciting future ahead, but sandblasted ultimately fizzles.

sandblasted is now in performance at the Vineyard Theatre in a co-production with WP Theater through March 13, 2022. For tickets and more information, visit here.