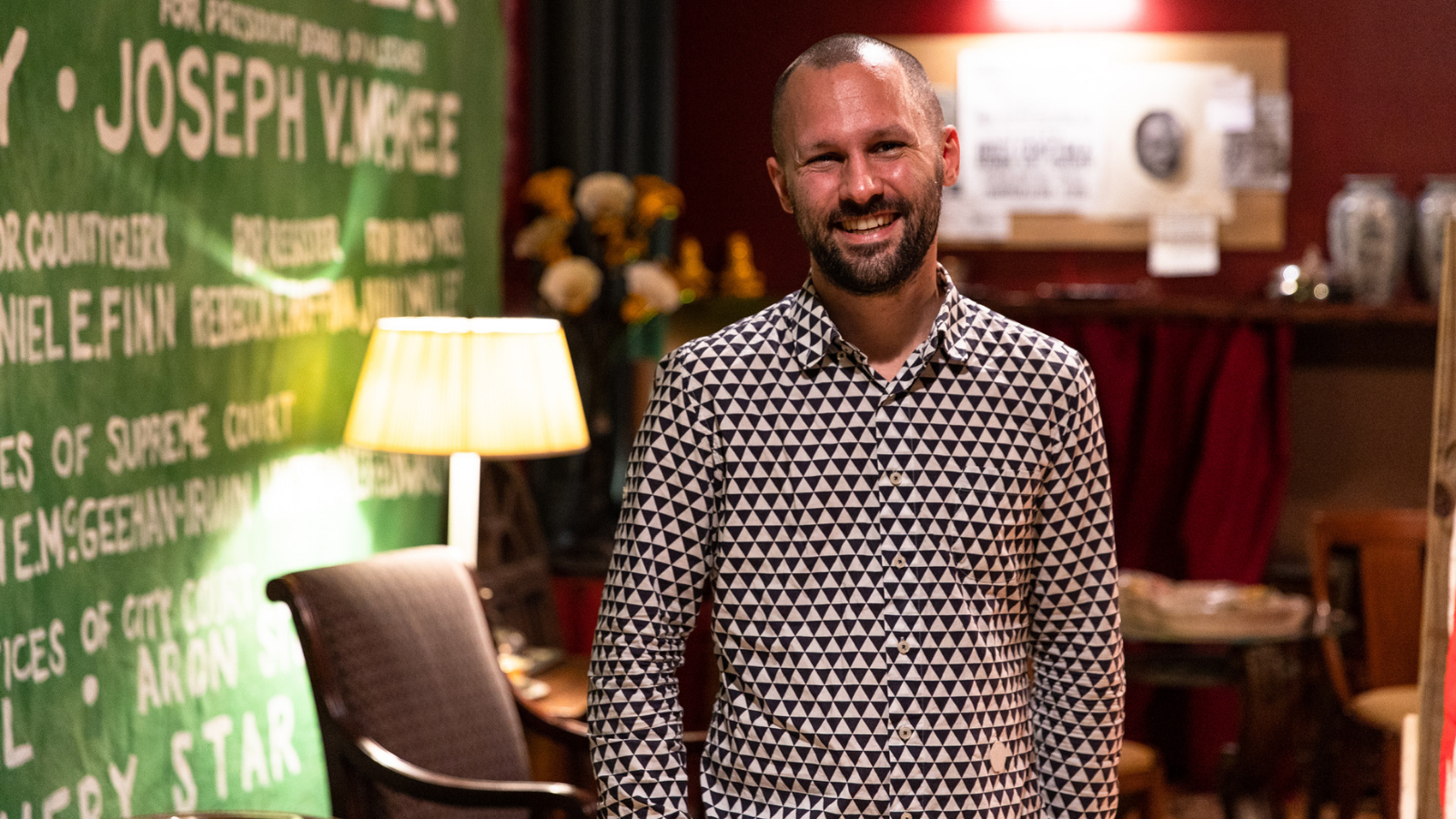 That’s the powder keg you step into in Tammany Hall, a new immersive show at Soho Playhouse created by Darren Lee Cole and Alexander Wright. Audiences get an up-close look at the Tammany machine as they are led through a recreation of The Huron Club, the very real prohibition-era speakeasy that Tammany did operate, right in the very building that is now home to Soho Playhouse.

Scenic designer Dan Daly has recreated The Huron Club in painstaking detail, carefully utilizing elements of the Playhouse building harken back to its 1929 form along the way, while also throwing in some contemporary flourishes as needed.

Dan Daly guided Theatrely through his designs for Tammany Hall to give us a taste of this immersive experience.

To begin the show, Daly designed a room which the real Huron Club of 1929 definitely did not have. Arriving audiences are led into an antichamber draped with red curtains, a liminal space that feels very Twin Peaks.

The antichamber came out of a practical need from the show’s creators for a pre-show arrival spot where actors could remind audiences to turn off their phone, and prep them to enter the show for real. Out of that need, Daly crafted an entryway which heightens the reveal of what’s to come.

“It gives us this moment to contract and then expand space,” said Daly.

Emerging through the curtains, audiences now enter one of the show’s largest spaces: the clubhouse. The whole audience gathers here and sees the play’s first scene together, before splitting into smaller groups that are led off to different corners of the Playhouse.

The clubhouse scenes feature a mayoral debate between Walker and LaGuardia, with the candidates’ verbal sparring match taking place in a literal boxing ring. (Walker was the mayor who made professional boxing legal in New York City.)

Along the sides of the room are raid curtains and chalkboards covered with betting odds. These details in Daly’s set serve a dual purpose.

“One of the concepts throughout the show is the idea of raid readiness,” he explained. “During prohibition, you had to always be ready for the cops to show up and to hide all your booze.” Raid curtains can be pulled, and chalkboards can be quickly scrubbed of bets.

Following the debate, the audience splits off into smaller groups to explore the backrooms of The Huron Club and get an up-close look at Tammany’s seedy dealings.

One group will explore the Tammany boss’s office, where a bookcase opens to reveal a secret room filled with documents detailing corrupt dealing which audiences can fish through. Jesse Sailer crafted the ephemera of Tammany Hall, and the piles of maps, sheet music and campaign posters lend added character to each space.

Meanwhile, another group is visiting the lavish dressing room of Betty Compton, Broadway and Ziegfeld Follies star and Walker’s wife. This bright, art-deco inspired space is stunning, but its suffocating patterns and the mirrors on all sides let audiences in on Compton’s fraying emotional state.

“A set tells time and place, but it also tells emotion,” said Daly. In this case, “the room itself feels like it’s pushing in on you. A lot of those emotional details help sell an immersive space.”

Down in the basement, the chorus girls share a dressing room that is far more “garish and packed-in,” as Daly puts it. This is the Soho Playhouse’s actual current dressing rooms, restored by Daly to something closer to its 1929 state.

To close the show’s first act, the audience gathers again as one in the Playhouse’s mainstage to watch Betty’s big dance number. Tammany’s actual 1929 hall would have been in this space, so Daly tried to pull out certain details, like the original chairs, while adding flourishes like period light fixtures.

Intense phone conversations play out at a desk in the back of the house, a spot where audience members are also pressured to sign documents which will make them accessories to Tammany’s dealings.

Daly notes the huge advantages of staging Tammany Hall on the site where the real Huron Club stood.

“The thing about doing site-specific work is that you need a site that is specific,” he laughed. “This is the building for this play.” The character of the Playhouse space allowed Daly to suggest Tammany’s coming decline, particularly the theater’s grubbier staircases and passageways which audiences would normally never see.

The show concludes in Soho Playhouse’s basement bar, here converted into the Huron Club speakeasy. Audiences join police as they prepare to raid the speakeasy, then watch the messy aftermath unfold.

Since Art Deco was only just coming into vogue in 1929, Daly gave the speakeasy a Victorian design, with textured wallpaper and wainscoting. The bar is also Tammany Hall’s least “real” space, as the piece grows more theatrical in its final scenes.

“The story is very real, so you want the spaces to feel real,” said Daly. “But it’s a theater piece, so you also want to be wow-ed. I think we’ve landed at a nice in between.”

Following the show, audiences can stay and grab drinks in the Club, comparing notes on what they saw—and on how much they let themselves be taken in by the political machine which the immersed them into.

“The play is about morals, both where you would have fallen at this time and where you fall right now,” said Daly.

If you did lose yourself—just blame Daly’s detailed, atmospheric and evocative designs for so fully transporting you back to 1929.

Tammany Hall is now in performance at the Soho Playhouse in New York City. For tickets and more information, visit here.

Joey Sims has written at The Brooklyn Rail, TheaterMania, Culturebot, Exeunt NYC, New York Theatre Guide, No Proscenium, BNet, Broadway’s Best Shows, and Extended Play. He was also Social Media Editor at Exeunt for two years. Joey is an alumnus of the Eugene O’Neill Theater Center’s National Critics Institute, and a script reader for The O’Neill and New Dramatists. Prior to the shutdown, he worked as an Operations Manager at TodayTix.