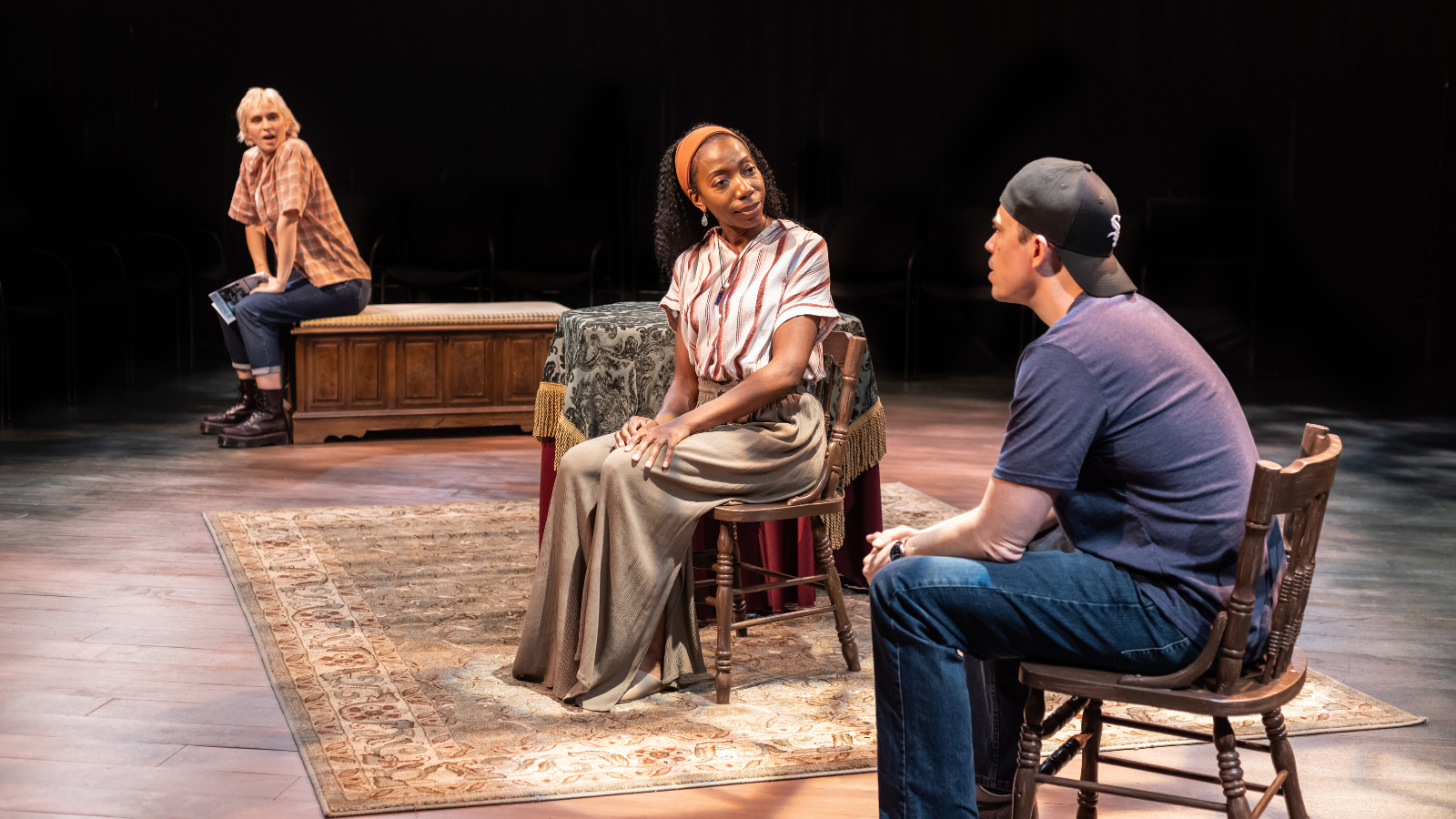 Attending a Zoom funeral for one of your family members is a painful experience. Take it from me. When my grandfather passed away from a stroke in early 2021, I was in college and according to my school’s guidelines couldn’t travel off-campus even for emergencies. Thus, I attended the funeral virtually, watching pixelated versions of my father and aunt going up to a blurry casket and giving hard-to-hear eulogies. There was something sordid about the entire event, something gross about denying me the chance to say goodbye in-person. But I was grateful that I had a way to say goodbye at all, some way to share a grief that was previously burning in isolation.

It’s these moments of awkwardness and communion that make up The Upstairs Department, the world premiere of Chelsea Marcantel’s play debuting at Arlington, VA’s Signature Theatre. The show was commissioned by Signature Theatre in February of 2020, but the pandemic has since redefined the show, making it an impactful meditation on grief during the COVID-19 pandemic. Timely, humorous, and searching, The Upstairs Department is a gentle reverie on what it means to grieve when the weight of death feels insurmountable.

The show opens with the medium Shiloh (Joy Jones) welcoming us into Lily Dale, a real-life New York town that’s a sanctuary for Spiritualists: those who believe that no souls actually dies but rather just leave their physical bodies. “The spirits entrusted us with a message,” Shiloh tells us. “There comes a point when we hear that message and need it, like we need our next breath.” That message? “That no one really dies, they just lose touch,” Shiloh states.

Scenic designer Paige Hathaway and lighting designer Annie Wiegand have ingeniously transformed Signature’s ARK Theater to be in the round. Llamps, tree-branches, lights, and photographs of the production team’s deceased family hanging all around the audience. It’s a smart move that makes the audience feel like we’re part of a seance-of-sorts. And the lighting design constantly asks us to look up, like the characters do when praying for some kind of connection to the afterlife.

On their way to Lily Dale is the brother-sister team Luke (Zach Livingston) and Colleen (Annie Grove), an odd-couple pairing who nonetheless care for each other deeply. It’s the summer of 2021, and the siblings are grieving the loss of their father due to the pandemic (like me, they attended a Zoom funeral). But both have very different visions of what grieving looks like to them. Luke feels convinced that he has some connection to the dead, telling his sister, “I sense them, I can hear them rustling around, and I know one of them is dad.” Colleen is more inclined to cut ties with the past and accept death as a permanent fact. In any case, Colleen wants to support her brother, and begrudingly agrees to stay for a few weeks at Lily Dale to foster his connection with potential mediumship.

Marcantel’s play moves deceptively quickly, allowing time for thoughtful rumination on death but keeping scenes quick and sometimes moving in surprising ways to the past. The scenes in which Shiloh, Luke, and Colleen are all together prove the most dramatically compelling. We get to see an intellectual and emotional battle between Colleen’s skepticism towards Spiritualism and Shiloh and Luke’s empathetic endorsement of it. It’s here where the necessity of grief is shown, yet the methods for grieving are debated, and it’s fascinating to watch. America seems to be in the midst of “returning to normal” and “moving on” from the COVID-19 pandemic, so it seems awfully relevant that The Upstairs Department draws upon the rage and disappointment of Americans not ready to move on or return to whatever normal used to be.

Unfortunately, the show has one glaring problem, and that’s the character of Shiloh. Serene, New-Age-y, and always steady, she serves little purpose in the show other than to guide Luke and Colleen to a space of enlightenment. In this production Shiloh is Black and Luke and Colleen are white, so Shiloh veered a little too close to the “magical negro” stereotype for my liking. The character does have one powerful solo scene where she shares her own grief, and actress Joy Jones acts the hell out of it. I was grateful to be in Jones’s presence. But Shiloh’s dramatic arc happens primarily off-stage, making her little else but the sage guide for white people solving their own problems.

If Shiloh’s characterization feels a little half-baked, that’s because the other characters of the show are so richly layered. Luke and Colleen’s relationship feels intimately lived-in, each one yearning for change and yet tethered to young memories of each other. Livingston gives Luke a refreshing mix of sensitivity and machismo, and Grove’s Colleen comes across as wary but always compassionate. They’re a fantastic duo, especially when exploring topics rarely put onstage, particularly the complex dynamics when some family members resist another’s gender presentation.

By the end of the show, you may be surprised by how moved you are with The Upstairs Department’s engagement with COVID-19. For the entire pandemic, I’ve made jokes with my theatre friends that I’ll never want to see a two-hander with people in quarantine ever in my lifetime. I was nervous that The Upstairs Department would be that kind of anatomical recreation of the traumatic early days of the pandemic. But this show avoids that trap. Once I let go of my skepticism—like The Upstairs Department characters do—I was surprised how much of a relief it was to see the heartbreaking and at times absurd after-effects of the COVID-19 reflected back to me onstage.

As the ways people die keep changing, methods of grief must change as well, and perhaps The Upstairs Department is the next evolution of this grieving process. Being able to laugh at awkward moments of mourning, like a Zoom funeral, is just one of the many lovely charms this show has to offer.

The Upstairs Department is in performance at Arlington, VA’s Signature Theatre through June 12. For tickets and more information, visit here.