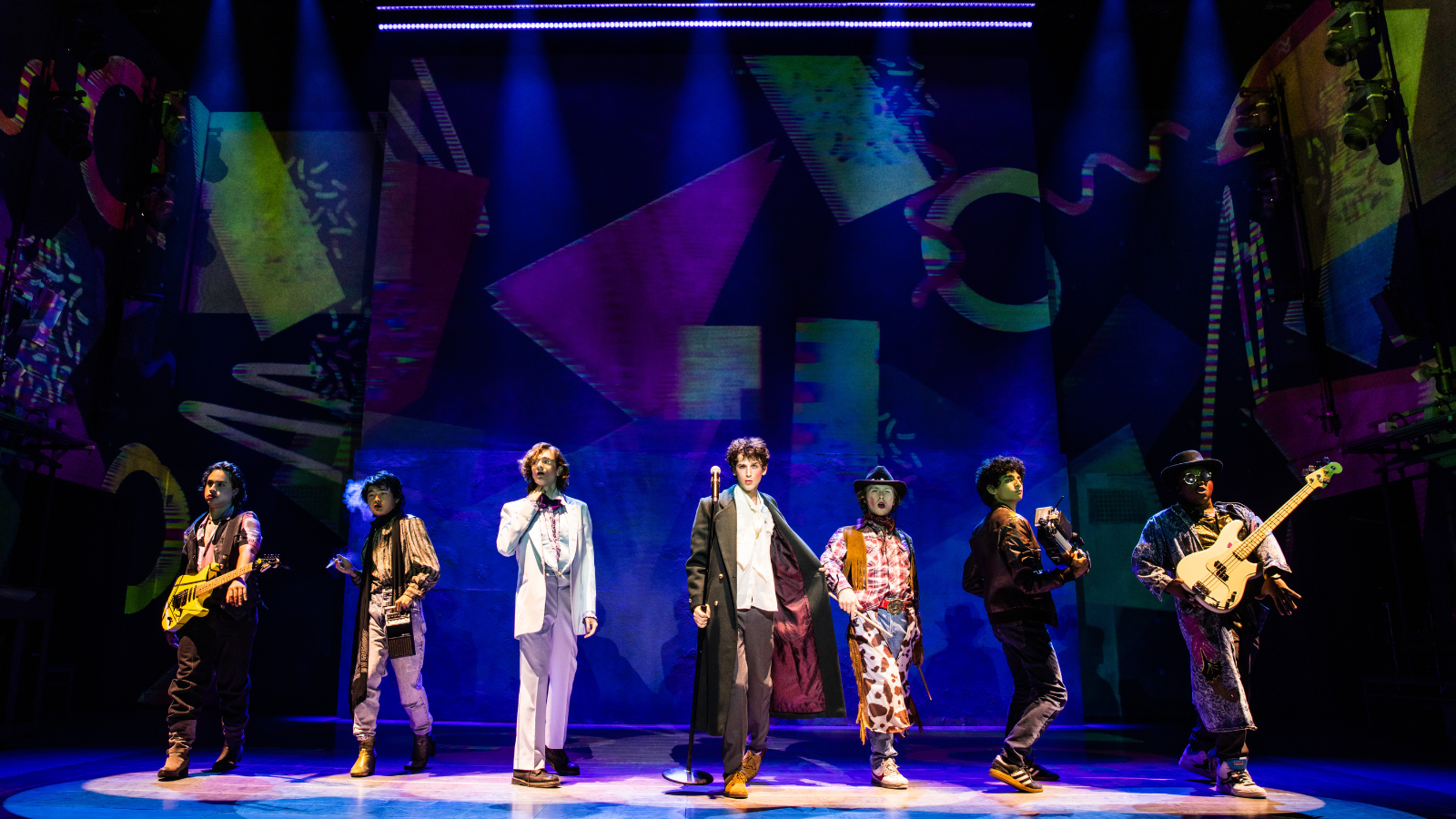 When Sing Street announced an immediate move to Broadway during its off-Broadway tryout in January 2020, the quick transfer came as a surprise. New York Theatre Workshop’s staging of the musical adaptation, based on John Carney’s cult film and featuring songs by Gary Clark and a book from Enda Walsh, was charming and often moving—but at times oddly lifeless. Responses were mixed, but the show barreled on, promising adjustments ahead of an April opening at the Lyceum Theatre.

Of course, that opening never came, and the show fell into limbo. A live stream concert with the cast in April teased a quick return, but that promise gave way to silence as the shutdown dragged on. Even when Broadway did return, Sing Street continued to sit uncertainly on every “Upcoming Broadway Shows” list, punctuated with a hopeful question mark.

Now, Sing Street is following a new path, probably the one it should always have taken, with a second pre-Broadway tryout to allow for significant creative reworking. Huntington Theatre Company in Boston presents the new production at its Calderwood home through October 2. The creatives are the same, including director Rebecca Taichman and choreographer Sonya Tayeh, but most of the cast members are fresh faces.

The result is a huge improvement—if still not quite the huge leap forward this show needs. The new Sing Street has the same bones as Taichman’s NYTW work but is more coherent, more energetic, and far richer with emotion. If it still stumbles at points, hampered by awkward plotting that Walsh’s book still can’t seem to shake, this Sing Street is nonetheless cathartic, joyous, and, best of all, really, really sad.

‍Sing Street is set in 1982 Dublin, and follows 16-year old Conor Lawler’s attempts to impress a mysterious model named Raphina by forming a band with a group of schoolmates. At home, Conor’s parents’ marriage is collapsing; his brother, Brendan, never leaves the house; and his sister, Anne, is buckling under the pressure of college. Soon, the band may be Conor’s only hope of escape to a better life.

It’s not a happy tale, and in trying to honor the truth of Conor’s often bleak situation, Taichman’s NYTW staging sometimes itself fell into drudgery. But here, Taichman and co. have mostly created an alchemy of sadness and hope, one that eluded them in New York.

From the start, things feel different. The show has dispensed with the old opener, a full company rendition of Depeche Mode’s “Just Can’t Get Enough.” The band’s gradual creative self-discovery is now the clear throughline, musically speaking, which means no songs at all for a good 20 minutes. That shift in focus makes for an initial slow burn and a first act that feels more like a play with songs. But tying the structure of the piece so clearly to the band’s creative development makes the piece’s emotional journey far cleaner.

Besides, the songs are worth the wait. With the rousing “Up,” the kids first find their collective voice and begin moving as one, imperceptibly at first, then in an explosion of creative discovery. It is transcendent theatre. Taichman’s careful tracking of the band’s gradual artistic growth here meets with Tayeh’s effortless movement work to stunning effect.

In New York, the show’s determinedly low-tech musical numbers were at times frustrating, with Taichman maybe sticking too insistently to a grounded aesthetic. That is corrected here—at least, up to a point. “A Beautiful Sea” and “Dream for You” now get full-on concert stagings that allow Tayeh, lighting designer Natasha Katz, and sound designer Peter Hylenski to fully pop off, turning the kids ever-so-briefly into proper rock stars. It’s the right move, especially in the case of “Dream For You,” which kicks off Act 2 with propulsive delight. Even so, the signature number “Drive It Like You Stole It” remains underwhelming, though it at least now plays without interruption. Still, why the whole company does not get involved in this number, as in the film’s wondrous dream sequence, is a mystery.

As Conor’s depressive older brother Brendan, who lives vicariously through his siblings’ dreams while refusing to leave the house, Dónal Finn brings probably the show’s biggest shift in approach to a central character. As played by Gus Halper at NYTW, Brendan hovered on the edges of the action, a restrained figure who only let loose right in the final moments, when he picked up a guitar and led the show’s rousing final number, “Go Now.”

Walsh has now reoriented the story to center around the brothers’ close bond, beginning with an opening tableau of the two leaning on each other for support. Finn gives Brendan a manic energy. His underlying mental illness is still clear, but his performance is a force that propels the show forwards, keeping dreams alive even in his most hopeless moments. The change lessens the power of that final song, but the trade-off is more than worthwhile.

And what of our new lead? Young, unknown Adam Bregman is objectively too hot for the role —no way would Conor have those muscles–but he’s undeniably winning. His sweet-faced turn helps clarify Conor’s total lack of internal darkness, an important element of the character that proves integral to his close bonds both with his brother and love interest Raphina. The two of them are, as Raphia herself puts it, “happy-sad people.” Ever hopeful, Conor can’t really wrap his mind around what “happy-sad” even means, and both find themselves drawn to his innocence.

Bregman finds a strong chemistry with Courtnee Carter, but Carter otherwise feels miscast as Raphina. The character is certainly a male fantasy and, as such, a tough assignment. Carter does not feel noticeably older than the other kids, which she really needs to; and she is certainly too warm and inviting for a character described, in song, as such a “Riddle.” Original cast member Zara Devlin is missed in that role.

Also missed is Skyler Volpe, who brought ferocious energy to the big second act number “Girls,” an explosion of pent-up teenage rage led by Conor’s sister Anne. Here that number is led hesitantly by a sadly underpowered Alexa Xioufardiou Moster, and does not hit nearly as hard.

The young band members are uniformly excellent, and find a persuasive, unforced camaraderie that again was lacking in New York. The two holdovers from NYTW, Gian Perez and Anthony Genovesi, are strong, but the clear standout is Ben Wang, who delivers an uncommonly sensitive turn as Conor’s friend Eamon, though their friendship needs clearer development.

The show tosses Conor’s mother a half-hearted The Cure number, “In Between Days,” while also beefing up Anne L. Nathan’s role to make up for taking away a song she had off-Broadway. Meanwhile cruel school head Brother Baxter is no longer played as a clearly closeted homosexual (Martin Moran leaned into this reading at NYTW), which is fine but leaves the character in an unclear space. Ultimately Walsh and co. may have to accept that this show simply belongs to the kids, and give up their (admirable) attempts to lend nuance to its adults.

The show’s second act still needs work. Two rebellion numbers follow too quickly after one another, “Drive It Like You Stole It” into “Brown Shoes”; and a conflict which briefly breaks up the band still feels forced. The moving finale ultimately makes up for much of the second act’s messiness, but it remains choppy waters.‍

Sing Street is ultimately a deeply sad story. Buoyed though it is by Conor’s relentless hopefulness, it’s a story as much about the impossibility of escape as it is about dreaming for a better life. Here in Boston, the show is that much closer to cracking that “happy-sad” challenge. At its best, this new Sing Street hits on the unique, heartbreaking comfort of finding your little piece of beauty amid an endless sea of heartbreaks.

‍Sing Street is now in performance at the Calderwood Pavilion/BCA in Boston through October 2, 2022. For tickets and more information, visit here.