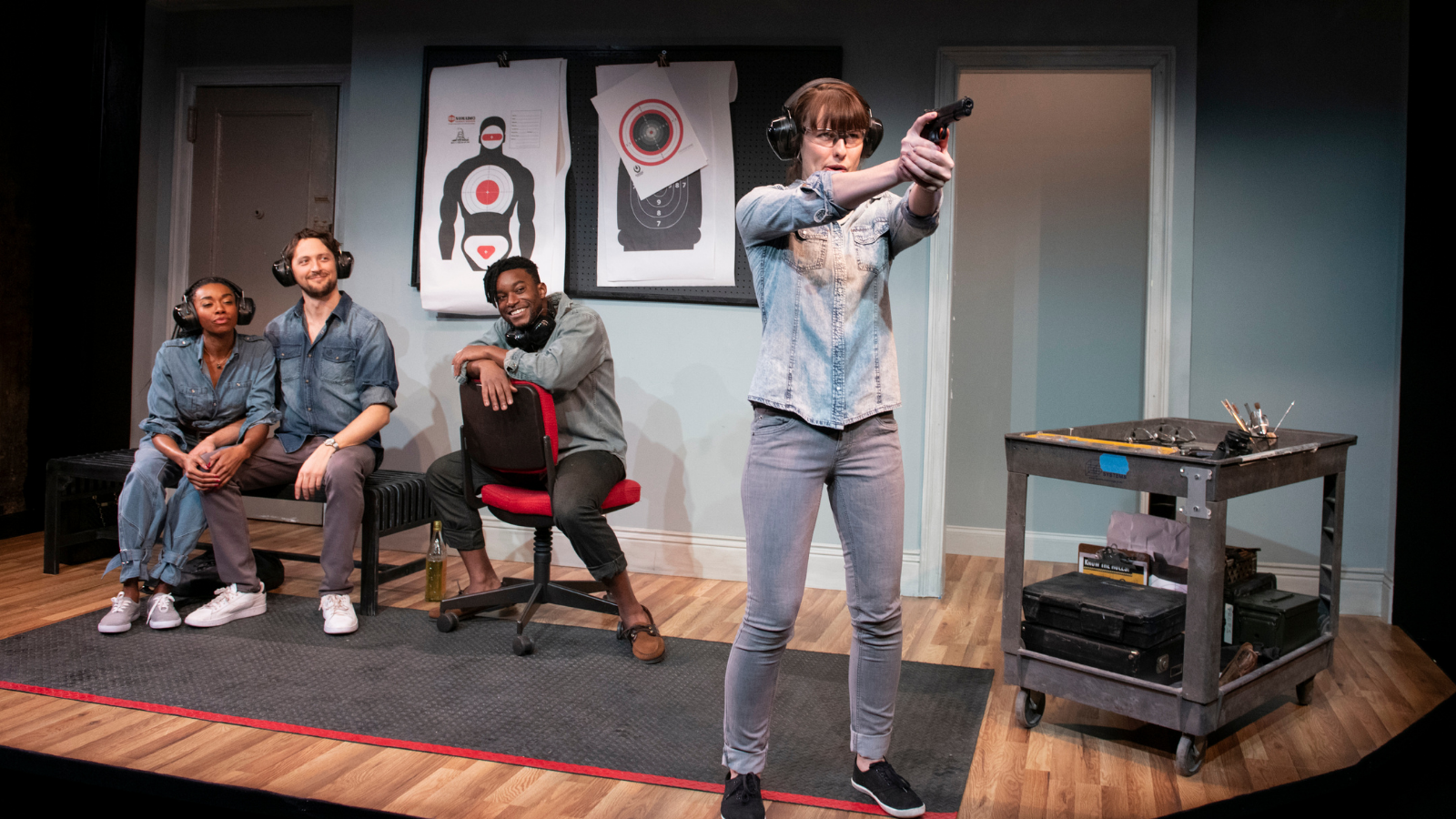 Before I dive into White Noise, before I discuss my own pain, before I stride towards creation and not destruction, I have to say this: I deeply admire Suzan-Lori Parks.

Suzan-Lori Parks is one of the most commanding, influential playwrights in the theatre industry. A Pulitzer Prize winner whose work has spanned over three decades, Parks audaciously stages history, bringing the deep historical wounds of Black America into the caustic aliveness of a theater. For most of her career, Parks’s signature style was this: transpose myths (the Odyssey, The Scarlet Letter) and historical legends (Saartje Baartman, Abraham Lincoln) into abstract theatrical spaces, but fill the dialogue with Black slang, humor, and family. Her worlds felt both intimate and distant. Recognizable parts of contemporary life appeared, but twisted into haunting images that seared into your memory.

The election of Donald Trump seems to mark a creative turning point for Parks. Before 2017, she fabricated dense, strange metaphors for the lives of Black Americans. But why write metaphorical cages, when children are being put into physical ones?

In response to troubling times, Parks adjusted her playwriting framework. Instead of transposing history onto Brechtian spaces, she transposed history onto the present day (it’s a similar experiment that The Handmaid’s Tale proposed: if it happened then, couldn’t it happen now?) Parks wrote the 2019 film Native Son, which pulled Richard Wright’s 1940 novel into the Black Lives Matter era. She also created 100 Plays for the First Hundred Days, reviving her playwriting experiment from 2002 in order to overtly critique the Trump administration.

This new era of Parks’s career is potentially thrilling: never before has she written with such political specificity and urgency. However, there are major flaws in this new methodology. Parks’s previous writing felt indelible in its stylized archetype. But in Parks’s new work, everything’s supposed to be happening in real life, which makes her historical transpositions and remaining archetypes ring untrue.

I’m giving this background information because Parks’s first full-length play in this new era of her career—White Noise, now playing at D.C.’s Studio Theatre— is kind of a mess. Ambitious, blunt, baffling, and unrelenting, White Noise is a tragedy for our apocalyptic era, when nothing makes sense and past horrors won’t disappear. But it’s primarily a meta-theatrical tragedy about the dangers of writing to the present moment; it’s a different sort of cautionary tale than Parks and the Studio Theatre team might have envisioned.

The show opens with Leo (RJ Brown), a Black man discussing a constant insomnia that’s borne a restless artistic life. He’s tried listening to white noise machines, but it’s only led to always hearing the paradoxically loud sound of silence. After experiencing police brutality on a late-night walk, he hatches a bold plan for his future safety.

The four characters of the play are a close-knit friend group, but their identities are written very purposefully to create a matrix of overlapping and competing identities. Leo’s white girlfriend is Dawn (Katie Kleiger), a go-getter lawyer who believes working within the justice system will provide Leo peace. Meanwhile, there’s another couple between Ralph (Quinn Franzen) and Misha (Tatiana Williams). Ralph’s a white professor who rarely publishes, and is furious that a tenure-track position recently went to a South Asian colleague. Misha (who’s Black) is running a social media show called “Ask a Black” where she gives pithy, Ziwe-like explainers on how white people should treat their Black colleagues.

Once Leo has assembled his friend group at a gun-range, he unveils his bold plan (spoilers for the first act follow). He wants Ralph to own him, to treat him as a slave for forty days. Explaining his thought process, Leo says that in antebellum slavery, traveling Black men could escape physical harm by showing documents proving they were owned by white men. When his three friends state their discomfort with the proposition, Leo screams, “HOW THE HELL ELSE AM I SUPPOSED TO PROTECT MYSELF? What else can I really do? Really? What else can I do?” And so, after some tense personal and financial negotiations, they begin this daunting experiment.

I understand what Parks is trying to do here. Like her other post-Trump works, she’s bringing a historical trauma into right now, to show that nothing has fundamentally changed over centuries for Black men in America. The contract Ralph and Leo make together even includes amendments, turning it into a Constitution-like document. The experiment they’re creating is the American experiment, shrunk down in miniature. Ralph’s apartment becomes a nation-state, fledgling and radical and disturbing.

White Noise’s downfall is that Ralph and Leo’s slavery experiment just makes no sense logistically. At the beginning of the forty days, Leo is basically allowed to go wherever he wants. So why are they even calling it slavery? If Leo is aching for safety, why would he sign a contract that doesn’t include any safety measurements? Won’t cops still harass Leo based on his skin color, not any documents he has? Wouldn’t a Black person on the street, seeing Leo proudly proclaim his own enslavement, try to stage an intervention?

Leo’s emotional world is incomprehensible, too. Costume designer Dominique Fawn Hill shrewdly puts Leo in Sperry’s boat shoes, hinting that he’s a huxtable trying to succeed under the rules of white supremacy. But there’s a big difference between being neoliberal and being a slave. I might try to define Leo’s self-imposed slavery as at “mad” act at the intersection of race and mental disability, as recent scholars have done with other Black creatives. But Leo is supposed to be an everyman, and his understanding of slavery seems as warped as Kanye West’s. The difference is, Leo doesn’t have access to West’s unbridled fame and wealth.

Like Dawn and Ralph and Misha, I wanted to suspend my disbelief and go along on Leo’s journey. But Parks has created a world filled with self-referential banter, and excruciating recreations of slavery mechanics. It’s so literal I found it hard to let my imagination run wild. Parks is dangling a misguided thought experiment in the form of a realistic play, and it strains credulity at every second.

Here’s the part where I say that all the actors in this Studio Theatre production perform excellently. Franzen captures a pseudo-intellectual resentment so accurately that he threatens to make the show a character study about himself. Kleiger and Williams help their characters maintain a deft self-awareness on rapidly evolving politics, making Dawn and Misha’s prickly actions compelling. Even Brown, given the toughest role in the play, effectively communicates Leo’s simmering rage and fear simultaneously.

But the premise of a show is its engine: if the premise doesn’t work, all other elements of a production must work overtime to keep the show from sputtering and stopping. That’s what’s happening here. As Black critics have already argued, it’s hard to imagine a single Black person who’d volunteer to be enslaved under the conditions Parks establishes. Because of this, White Noise struggles to its inevitable end, where Leo’s experiment goes awry and everyone is devastated.‍

White Noise left me in a depressive state for weeks, one punctuated with memories of my own body in danger. Because I am a light-skinned person of color, I'm rarely targeted by the police on my own. But I have been targeted by the police while in the presence of my Black partners, and I have feared for my own life in those situations. My own grappling with these horrors, like Leo’s, has been fueled self-destruction.

Although Parks tries to stage slavery literally, slavery in White Noise might be better understood as a metaphor for Leo’s own self-harm. Hurting yourself is irrational and illogical. It brings more destruction when destruction is already suffocating. I know this firsthand: when the world makes me feel like nothing, sometimes I truly want to become nothing. Isn’t that also what Leo’s trying to do, in becoming a slave? Killing his own wants, dreams, and life?

But here’s the thing. There’s a reason why, prior to White Noise, there’s never been a play called for colored men who have considered slavery/when the rainbow is enuf. It’s because slavery is not a metaphor. Slavery is a tool of genocide. To propose the idea of voluntary chattel slavery as a metaphor (for mental health, or suicide, or the current state of Black America) is to grossly misrepresent history. Unlike Leo, Black enslaved Americans were never the architects of their own subjugation.

If you’re looking for a play that speaks to the Trump presidency, that grapples with slavery in a meaningful way, I’d suggest Claudia Rankine’s The White Card. In the play, Charlotte (like Leo) is a Black visual artist recreating violence against Black Americans, so that she (like Leo) might reveal her own pain.

But Charlotte changes her mind about her project midway through the show, realizing the damage she’s caused by parading genocide as art. “I had this image of my work being held as in the hold of a ship,” Charlotte says. “All that art just packed in like the dead and dying bodies themselves.”

I kept waiting for a moment of quiet, still reflection like this in White Noise. But Leo, like many tragic figures, can’t snap out of the narrative he’s constructed. Parks wants us to learn from Leo’s tragedy, to create where Leo could only destroy. But White Noise doesn’t offer any non-destructive images, words, or even metaphors to initiate this creation process.

I also think we need to learn from Parks’s tragedy in writing White Noise. In trying to make a hyper-real show about the present moment, she created one of her most alien, incomprehensible realities yet. In trying to make a show critiquing self-destruction, Parks delivered more destruction for the people of color watching her show.

In the aftermath of White Noise, I hope Parks has a moment of self-reflection and change like Charlotte’s. A playwright this talented deserves to look upon her work, feel its pain, and create something less damaging in its wake.