SUN & SEA Makes Its Way To The Shores of America — Review 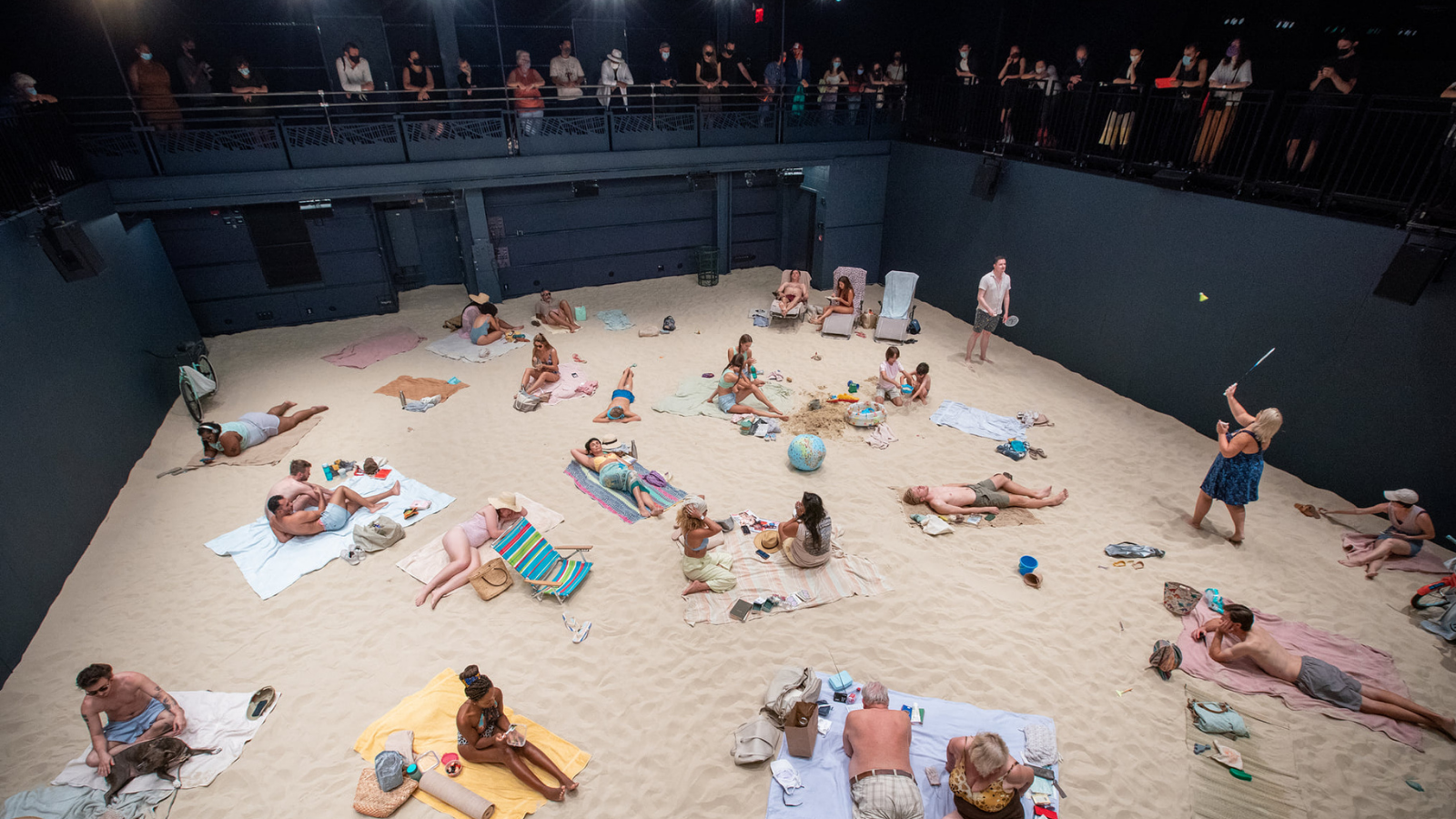 It was fitting that I had to brave a superstorm to get to the theatre to see Sun & Sea, an opera about the impending climate disaster at the Brooklyn Academy of Music. After a critically acclaimed run in Europe, the piece has made its way to the shores of America.

Sun & Sea offers a bird’s eye view (literally) of characters sunbathing on a beach. The performance is about an hour long and plays on a continuous loop for several hours. Audience members are encouraged to walk around an upper deck and look down on the beachgoers.  Below is a monumental scenic accomplishment from director and scenic designer Rugilė Barzdžiukaitė: 25 tons of sand have been poured onto the stage to create a realistic beach scene. Folks dressing in bikinis, bathing suits and sundresses lounge on towels and blankets and enjoy food and drink, play games and socialize. The scene is that of a perfect beach day, but through haunting lyrics and eerie melodies, we learn the ways in which the climate catastrophe has affected these characters' way of life and how this conventional appearing beach day has been planned out according to the tides and the weather. The action is set in the future, it’s not specified exactly how far into the future these characters are living, but it’s apparent it’s not unfathomably far away. Characters wear modern beach attire and play around on cell phones.

As I entered, two girls were sunbathing on a towel singing an eerie song that was reminiscent of a sea shanty. A synth that played simple, hypnotic melodies accompanied the singers as the girls sang of the sadness they experienced thinking about the future of animal life on this planet. A true ensemble piece, Sun & Sea featured 23 vocal moments sung by various members of the ensemble. One particularly aggravating moment was when the Wealthy Mommy sang about how her son had swam in most of the earth's bodies of water and how the family recently enjoyed a trip to the Great Barrier Reef which was a “bleached, placid white.” She explained how they had taken a guided tour and ate at a restaurant in the reef. The scene was sickening. To think of a world not far away where rich people will twist the great disasters of the climate crisis into tourism made my stomach turn.

While the opera featured a wide variety of stories, something that was mentioned over and over was a volcanic eruption that seemed to halt the world. I first encountered it from a man talking about how his plane to Portugal had to be grounded and how ever since he and his boyfriend have never been apart. The disaster is detailed again, this time by the entire ensemble who recount how a volcano erupted unexpectedly and against all the data and models of lead scientists and climatologists. The ensemble explains that when volcanic ash is drawn into a running plane turbine it turns to glass. Musically and dramatically, this was the peak of the opera. The entire chorus and soloists were singing this section and the music swelled to an overwhelming level. It felt like an apocalyptic warning to the audience of the world that is soon to be ours. Directly following the Volcano Story, we again hear from the Young Man from The Volcano Couple and he describes how he started with friends in London until it was safe to travel again. He and his partner kept repeating the words “we are together.” This was the last section I heard before the piece finished a loop.

The calmness of this piece is what made it so profound. Looking at folks on the beach, it’s very clear they’re at peace; they’re enjoying their lives with their friends and loved ones. This is their reality. Having the audience peek down on the scene feels like a strategic directorial choice. A choice that made me feel extremely powerless. I wasn’t sitting in my seat in a darkened theatre watching people on a stage. I was standing on a platform, looking down on a scene that was depicting a world so familiar, yet so unimaginably different. Or was it? I had to plan my journey to Brooklyn in the rain. I stressed about whether or not I’d be able to afford an uber back if the trains shut down due to flooding. I made a plan to stay the night with a friend if I couldn’t afford a car up to Harlem. There haven’t been any unexpected volcanic eruptions, and it’s not happening every day, but climate change is certainly becoming something that is eeking its way into the way I live my day to day life. And this is exactly how Sun & Sea leaves it’s mark on its audience. It's an unsettling look into what a post-climate-apocalypse world could look like and how difficult human life will become. Sun & Sea isn’t a warning and it isn’t a fantasy. It’s a prediction. Which is why it made for an exceptional evening of theatre.

“Sun & Sea” plays its final performance at BAM on September 26. Following that, it will embark on a nationwide tour including stops in Philadelphia, Bentonville, AR, and Los Angeles.