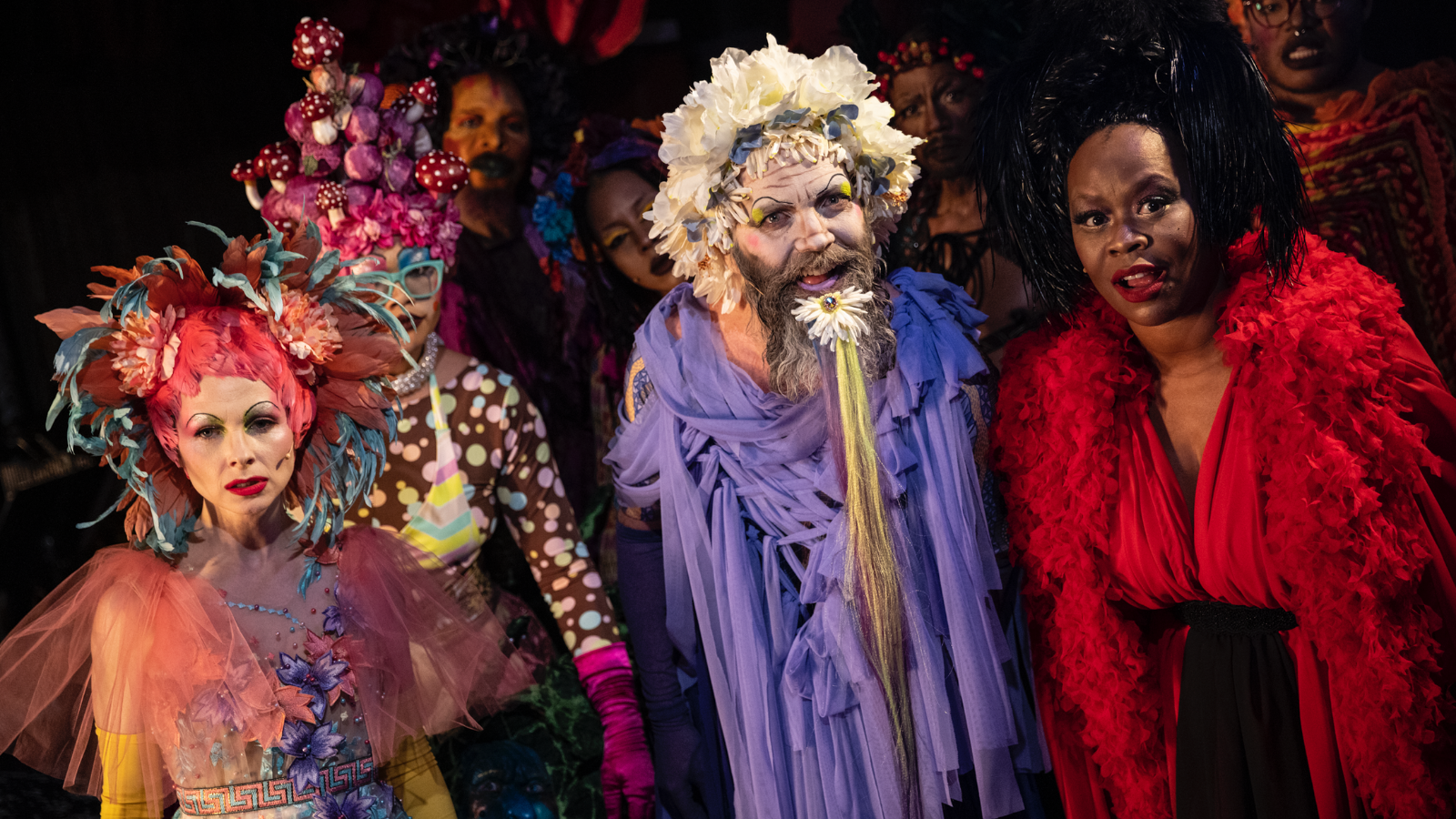 Taylor Mac (center) and the company of The Hang | Photo: Maria Baranova

By
Jerry Portwood
No items found.
on
Category:
Reviews

Whether it’s an original work or a novel adaptation of a classic, one never knows what to expect upon entering a production featuring Taylor Mac. I’ve seen Mac play a hermaphrodite sea creature, a bedazzled lovelorn flower, as well as Puck in Midsummer Night’s Dream and Shen Te in Brecht’s Good Person of Szechwan. My first encounter, over 15 years ago at a now-defunct arts space in Williamsburg, was Mac solo on stage playing a ukulele while singing a song, “The Palace of the End,” about a forbidden bond between Lynne Cheney and Saddam Hussein. It literally stopped me in my tracks and I’ve been a fan ever since.

A few years ago, for an abridged version of A 24-Decade History of Popular Music staged as part of the Montclair Film Festival, I watched actor Patrick Wilson dance arm-in-arm with a man as Mac sang a queered version of “Snakeskin Cowboys,” a song by the controversial cock rocker Ted Nugent that he’s proudly admitted was about gay-bashing. “Go on, I want you to be uncomfortable,” Mac coaxed from the stage, urging everyone into same-sex pairings—which they did. It was glorious.

So entering into HERE to experience Taylor Mac once again, this time as a queer Socrates—complete with a be-ribboned beard, a band, and a cohort of fabulous co-conspirators—feels like some sort of destiny. Titled The Hang, it does feel like an intimate hangout, with the members of the audience only slightly outnumbering the performers. Although the fact that all of us spectators are wearing protective K95 masks (they were even handed out at the door to those who may have arrived with simple cloth face coverings), does feel like we’re transformed into a jury rather than part of the revelry. And what a flamboyant cascade of song and dance it is.

The exuberant jazz opera, with upbeat music composed by Matt Ray, is a loose retelling of Socrates’ trial and execution, and how the philosopher’s death is depicted by Plato in The Apology. Don’t fret if you do not recall all the details of Socrates’ defense against “corrupting the youth” of Athens, or why it takes him so long to die after drinking poison hemlock, this isn’t purely the point. The delight comes in the layering of styles, a palimpsest of sounds and emotions. Instead it feels like we’re witnessing a New Orleans funeral procession and a mystical Radical Faerie banquet as Machine Dazzle once again dazzles us with his cacophony of costumes and set design, with plenty of feathers and ruffles, ropes and ruching.

At times it was difficult to decipher lyrics or greater meaning—save for a wry interlude when Mac deploys a Noël Coward impression to explain the trial—but beyond the snatches about gadflies and pondering the facets of virtue it was enough to wallow in the ritual, feel the saxophones, trumpets and trombones penetrate, to lean in and feast on the visual and aural treats. Much of the credit for this triumph goes to the intensely talented ensemble, including Synead Cidney Nichols and Kat Edmonson’s scat aria; El Beh’s crooning and Wesley Garlington’s thrilling whistle solo; Kenneth Ard strutting in little more than harness, codpiece, and thigh-high boots; Trebien Pollard’s duckwalk with bright orange satyr ram horns; Queen Esther’s tender belting as tears wet her cheeks.

The Hang is now in performance through March 6, 2022 at HERE in New York City. For tickets and more information, visit here.

Jerry Portwood is a writer, editor and critic who's been covering theater and culture for over two decades. He was formerly the Digital Editorial Director at Rolling Stone, Executive Editor of Out magazine, Editor in Chief of New York Press, and founding editor of CityArts and teaches at the New School.