THE DRAMA BOOK SHOP is Reopening! Thomas Kail and David Korins Chat The Importance of This New York Landmark 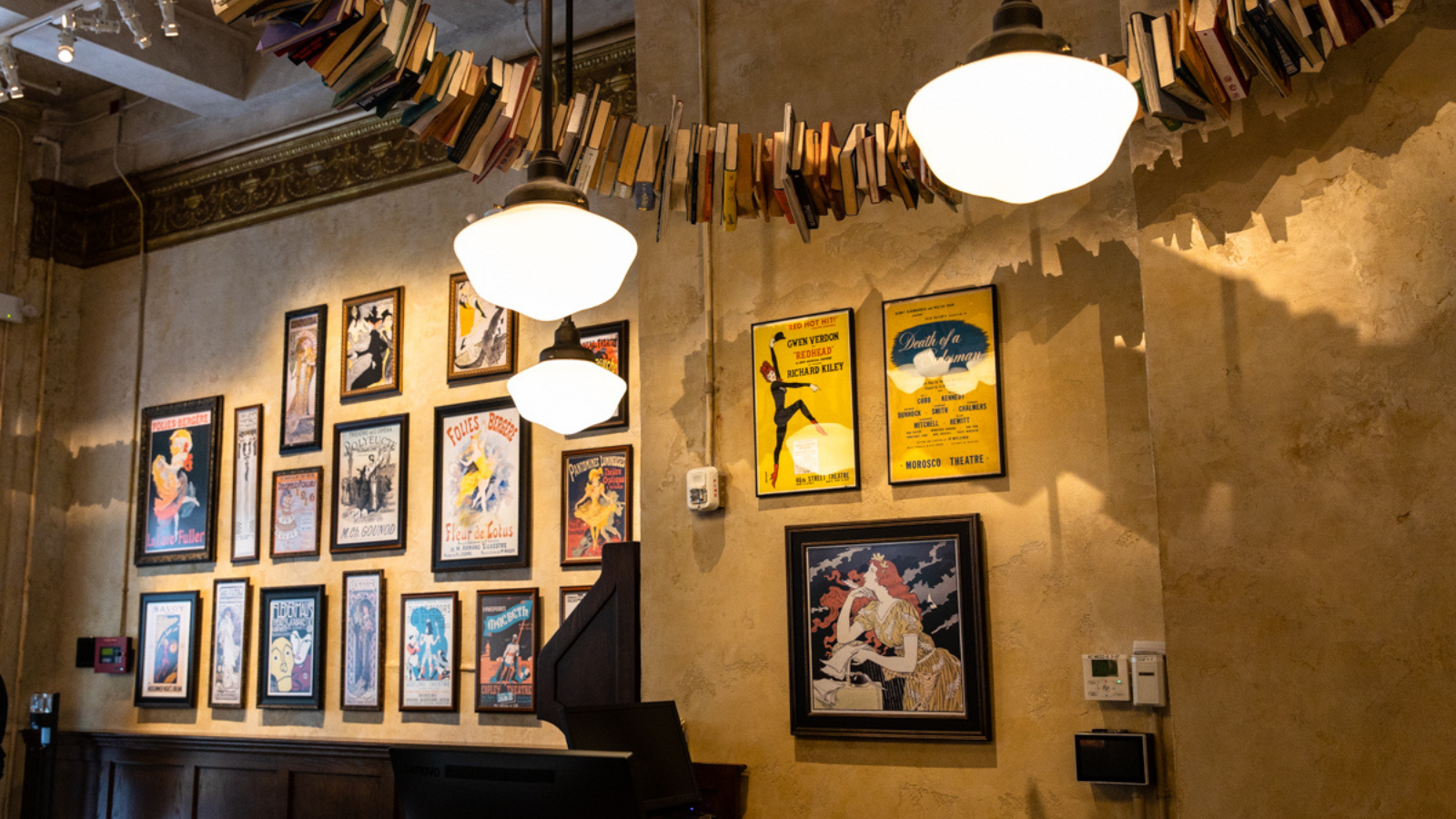 All photos by the wonderfully talented Rebecca J Michelson
By
Juan A. Ramirez
No items found.
on
Category:
Features

This Thursday, June 10, theatre aficionados will be able to return to a beloved Times Square institution, renovated and given the Hamilton team’s seal of approval. Though that blockbuster musical reopens in September, The Drama Book Shop—a storied purveyor of scripts and other theatre-related products—will open its doors in a new location on West 39th Street.

Opened by the Drama League in 1916, the store fell into deep financial woes until it was purchased by Hamilton creator Lin-Manuel Miranda, director Thomas Kail, lead producer Jeffrey Seller, and theatre-owner James L. Nederlander in 2019. I sat down with Kail and designer David Korins (also of Hamilton fame) after touring the newly unveiled shop.

“It's quite an overwhelming experience to be here,” Kail said. “In the Heights started here, Freestyle Love Supreme——a lot of my early collaborations started here——and now some of them are published and on the shelves, and In the Heights comes out the same day this opens.”

Kail said he first fell into the Book Shop’s spell upon moving to New York in 2001, when it was located on West 40th Street. He quickly befriended the store’s manager, Allen Hubby, and managed to make his production company, Back House Productions, the shop’s in-house creators. After meeting Lin-Manuel Miranda, the team began workshopping what would become the Tony-winning musical, In the Heights, in the shop’s basement.

“The old owners gave Lin and Thomas space—physically and spiritually—and we're trying to do that too, for a 2021-and-beyond audience,” Korins said. “We’ve tried to capture the DNA and energy the old location had but, while that one had spaces where you could cram yourself in and have a conversation, this place is built to house and foster conversation and community.”

New additions like extensive electrical outlets and larger bathrooms were important to the team, who approached the challenge of relaunching the Book Shop with a pay-it-forward attitude. Hubby, for example, will continue to manage the shop.

“We're still figuring out how to encourage new creators,” Kail added. “We would like to continue to develop the idea of having a space downstairs for performances or for events. So that's the next phase of the book shop after we open.”

The store carries theatrical and theatrically-adjacent products like scripts, memoirs, scores, cast recordings, and stationery. Upon entering the space, visitors encounter, not only a 140-foot “bookworm” sculpture made of 2,400 printed materials which snakes across the store, but a wide array of works by queer and POC creators prominently featured.

“There's so much that's been published in the two years since this store was last open,” Kail said. “We wanted to make it representative of the great diaspora of new work in theatre. There are plays that you might not have heard of that we’re Off-Broadway, as well as the classics.”

Also on sale are rare copies of landmark works, like first-edition copies of Mart Crowley’s The Boys in the Band and West Side Story.

“To have first editions and originals in the bookshop feels like a way to honor where we've been and remind us on whose shoulders we stand,” Kail commented.

These reminders carry over onto the walls, which feature a dazzling array of original and reproduced posters from iconic plays and musicals. A large banner for the 1976 Broadway revival of The Threepenny Opera greets shoppers, along with a variety of sheets advertising 19th-century European works and WPA-era works.

“I think the posters in the front are stunningly beautiful,” Korins said. “The really old posters that are all hand-painted and hand-drawn are extraordinary pieces of art. They all meet and reflect the times when they were created.”

In a back corner are 17 posters donated to Kail by the late theatre agent Gilbert Parker, who Kail said befriended him early in his career.

“He was an incredible theater agent for William Morris for many years,” Kail said. “He saw everything I ever made: every reading, every play, every musical. When he passed away about a year and a half ago, he wanted me to have some of the posters of the shows he represented that were in his apartment.”

The posters span much of American theatre’s 20th century, ranging from Crazy for You to Master Class. Kail said it was tough to choose which he held dearest, but singled out The Rink—a short-lived 1984 Kander and Ebb musical starring Chita Rivera and Liza Minnelli.

“The Rink is a good one because that's one not many people saw, but knew Chita and Liza were in it,” Kail said. “I mean, he represented George Furth, so we’ve got Company. He represented Terrence McNally, so we’ve got Kiss of the Spider Woman, which is such a seminal show for me.”

“Gilbert loved theatre, and wanted to broaden everyone’s experience of it,” Kail added. “He was an instrumental part of my life and I wanted to honor him and his family by bringing his posters here.”

The Drama Book Shop will open to visitors on June 10 through timed visits booked online.