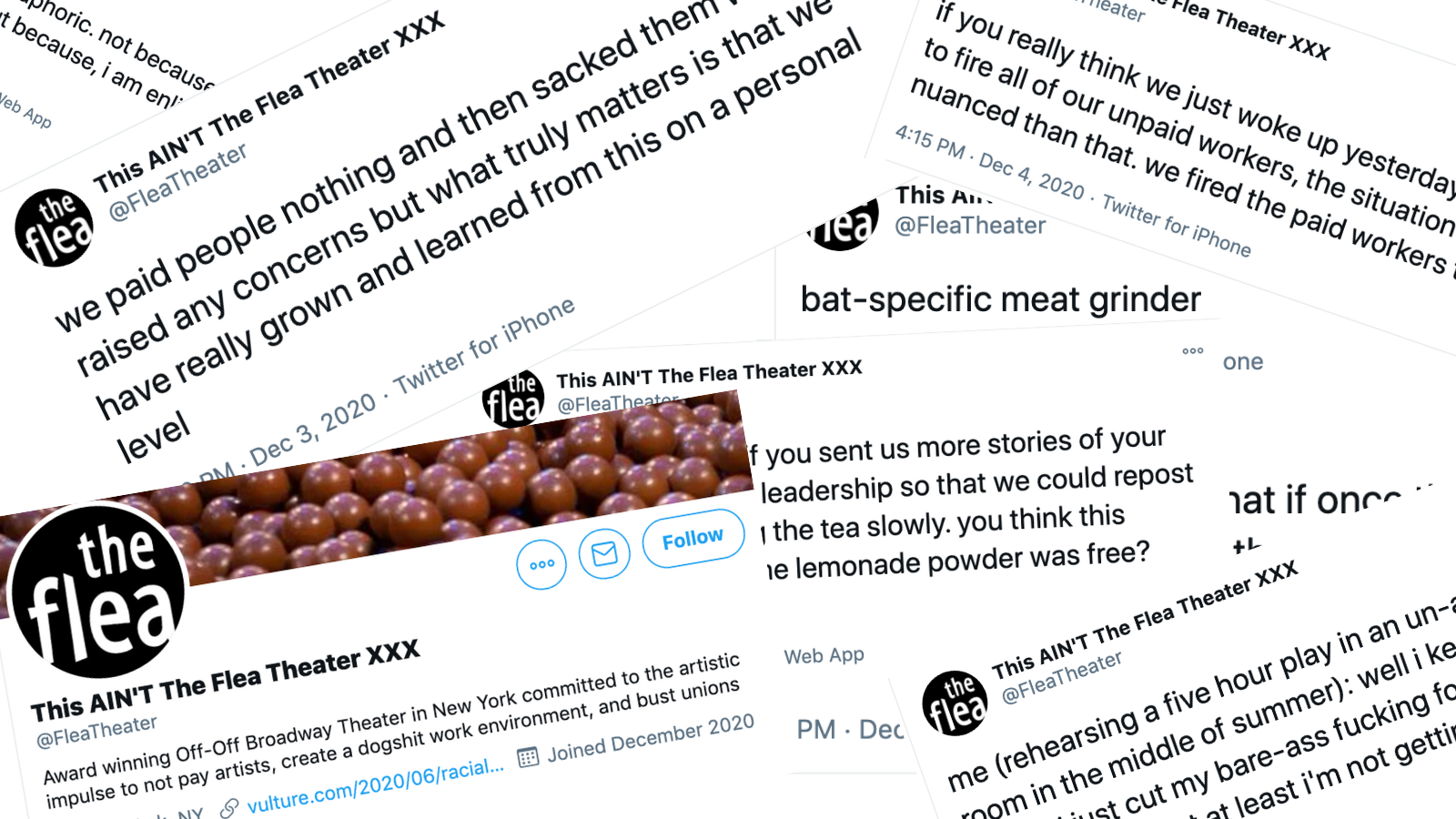 @FleaTheater on Twitter
By
Kobi Kassal
No items found.
on
Category:
Features

Like most theatres around the nation, with the social reckoning due to the the murder of George Floyd, organizations were forced to rexamine their structures and operations in this brave new world we are living in. For the Flea Theatre, an Off Off Broadway venue located in Lower Manhattan, this was no exception. After a publicly written letter by actor Bryn Carter was circulated on social media in June, the company announced that they would finally start paying The Bats - their in-house non-equity company.

A mere six months later, on December 2, the board published a letter, which has since circulated on social media, announcing that their Resident Artists programs, including The Bats, Resident Directors and Serial Writers Room, would officially end on December 15 of this year. For the numerous artists affected, this came as a shocking twist in the saga of the Flea Theater. Soon after publishing, many in the community took to Twitter to announce their displeasure with the decision. Hundreds of tweets started pouring in, including personal narratives of alleged abuse and mishandlings that have been running rampant within the organization for years. The Flea’s marketing department took down much of their social media immediately, as as of this writing, their latest tweet is from June.

Within hours, a new parody twitter account called @FleaTheater was created, which started tweeting and impersonating the organization in a comedic fashion. In less than 24 hours, that account has garnered over 1,308 followers at the time of this publication. Social media is an extremely powerful tool.

“The situation with the Flea Theater shows just how comprehensive companies have to be with their communication strategy - and that extends to social media. Parody accounts cropping up, deactivating actual accounts, reactivating those accounts, and then reporting parody accounts - it all amounts to one massive headache,” said Annie Schiffman, CEO of Downstage Media and social media consultant. “Yes, the Flea put itself in a difficult situation in the first place, and not having someone guiding them with a strategy on how to handle this kind of heat only added fuel to the fire. On the other hand, social media is now giving the artists who have been taken advantage of a voice and a platform to converge, commiserate, and convene to expose the working conditions that they faced - a conversation that is already causing a ripple effect throughout the national theater community.”

We love 2 things and 2 things only: busting unions and spreading covid in a ball pit

to the bats:
we hear you
we see you
we just don't care lol

This @FleaTheater Twitter take over is more dramatic and dynamic than like half the shows The Flea produced last year.

Give @FleaTheater an Obie you cowards

Give the folx behind the @FleaTheater account every single @BroadwayWorld Award