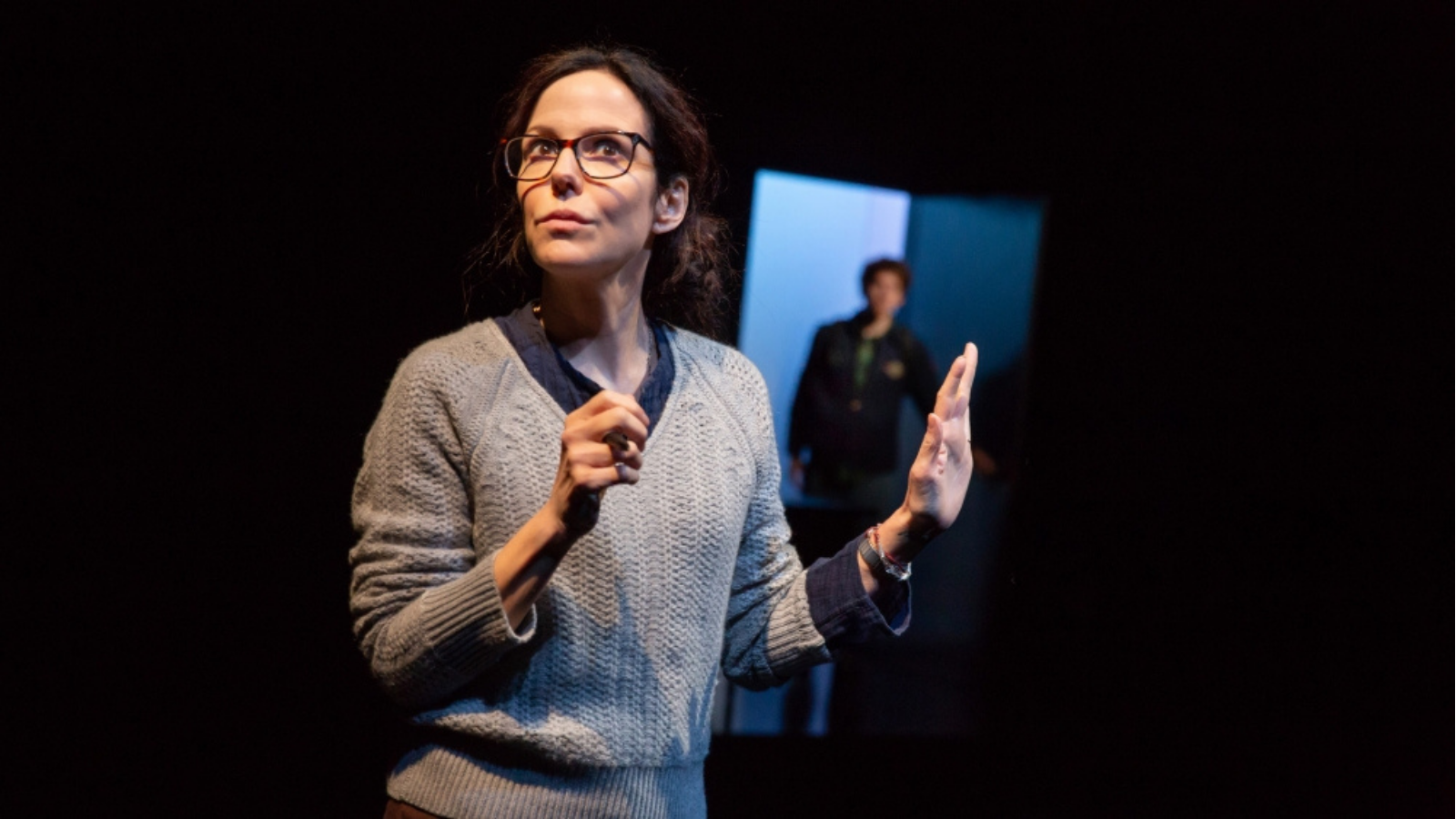 Mary-Louise Parker in THE SOUND INSIDE on Broadway | Photo: Jeremy Daniel
By
Zack Reiser
No items found.
on
Category:
Reviews

“A middle-aged professor of undergraduate creative writing at a prestigious Ivy League university speaks to an audience of strangers. She can’t see them, but they’re out there. She can feel them there as certain as old trees gently creaking in the heavy autumn air.” What Mary-Louise Parker was usually referring to at the beginning of Adam Rapp’s The Sound Inside was the audiences of almost 200 at the Nikos Stage of Williamstown Theatre Festival and the nearly 1,000 seats at Studio 54 on Broadway. It seems a little eerie, if not somewhat full circle, that Parker would be saying those words to the wider, unseen audiences of an audio play, a part Audible's latest slate of theatrical offerings. But what follows is a piece so well tuned to its new form, that you may as well close your eyes and imagine Mary-Louise Parker and Will Hochman on stage before you.

In The Sound Inside, Mary Louise Parker plays Bella Lee Baird, a Yale writing professor in her mid 50s who is given a diagnosis of stage 2 cancer. Breaking the fourth wall, she narrates her decisions as if writing a novel in real-time to the audience as a means to process her emotions. These choices eventually entangle one of her students, Christopher Dunn, played by Will Hochman–a freshman who with a disdain for needing to follow the rules (and using email) doesn’t fit in with the rest of his Ivy League peers. As Dunn shares pieces of his own novel in-progress with Baird the two become close, leading Baird to ask Dunn to do something she knows only he will understand why.

I was fortunate enough to see The Sound Inside during it’s Tony Award-nominated Broadway run, and I was perhaps most astounded at how sparse David Cromer’s production was. The truly black box scenic design from Alexander Woodward and dim lighting by Heather Gilbert only illustrated just enough details to put you in a scene–a persian rug, couch, and end table with a lamp to represent Baird’s living room; or a spotlight and projected scans to portray the claustrophobia of an oncologist’s exam room. Combined with Rapp’s acute narration split between Parker and Hochman, I felt just as akin to reading a novel as I did watching the play unfold before me, letting my mind fill in the vast black beyond the drama unfolding in front of me.

In its new incarnation as an audio play, The Sound Inside mostly makes the leap from stage to headphones with dexterity, allowing me the same illustrative sensation I felt seeing the show in person. Given the play’s already novel-like narration this did not come as a surprise. What did surprise me is how well Parker’s and Hochman’s performances come across without ever seeing their faces. Parker so sensitively and deftly paints a portrait of a lonely woman given a death sentence it’s hard not to feel emotional as she pleads to her oncologist that maybe she has a 23% chance of surviving, as he quickly shoots her right back down to 20% odds. Hochman, opposite her, pulls no punches, as his bombastic intensity exquisitely matches the torn restraint in Parker.

Though the sharp chemistry between them doesn’t come across as strongly as it did on stage–the look Parker shoots Hochman when he spits on her office floor after a battle of words, and the almost erotic tension as Hochman puts his hand on Parker’s face as the two of them sit on the floor of her living room–it’s clear even in audio form that Parker and Hochman are two well matched scene partners. Their performances individually thread the needle so finely for an individual audience member that I almost don’t need the visual information of the production to enjoy the ride.

Christopher Dunn pulls a quote from Dostoevsky on the reverse side of his novella’s cover sheet, “We sometimes encounter people, even perfect strangers, who begin to interest us at first sight, somehow suddenly, all at once, before a word has been spoken.” I can think of no better way to describe The Sound Inside, even if that first imagined “sight” is something different to every audience member who listens.

“The Sound Inside” is now available to stream on Audible. For more information, visit: www.audible.com