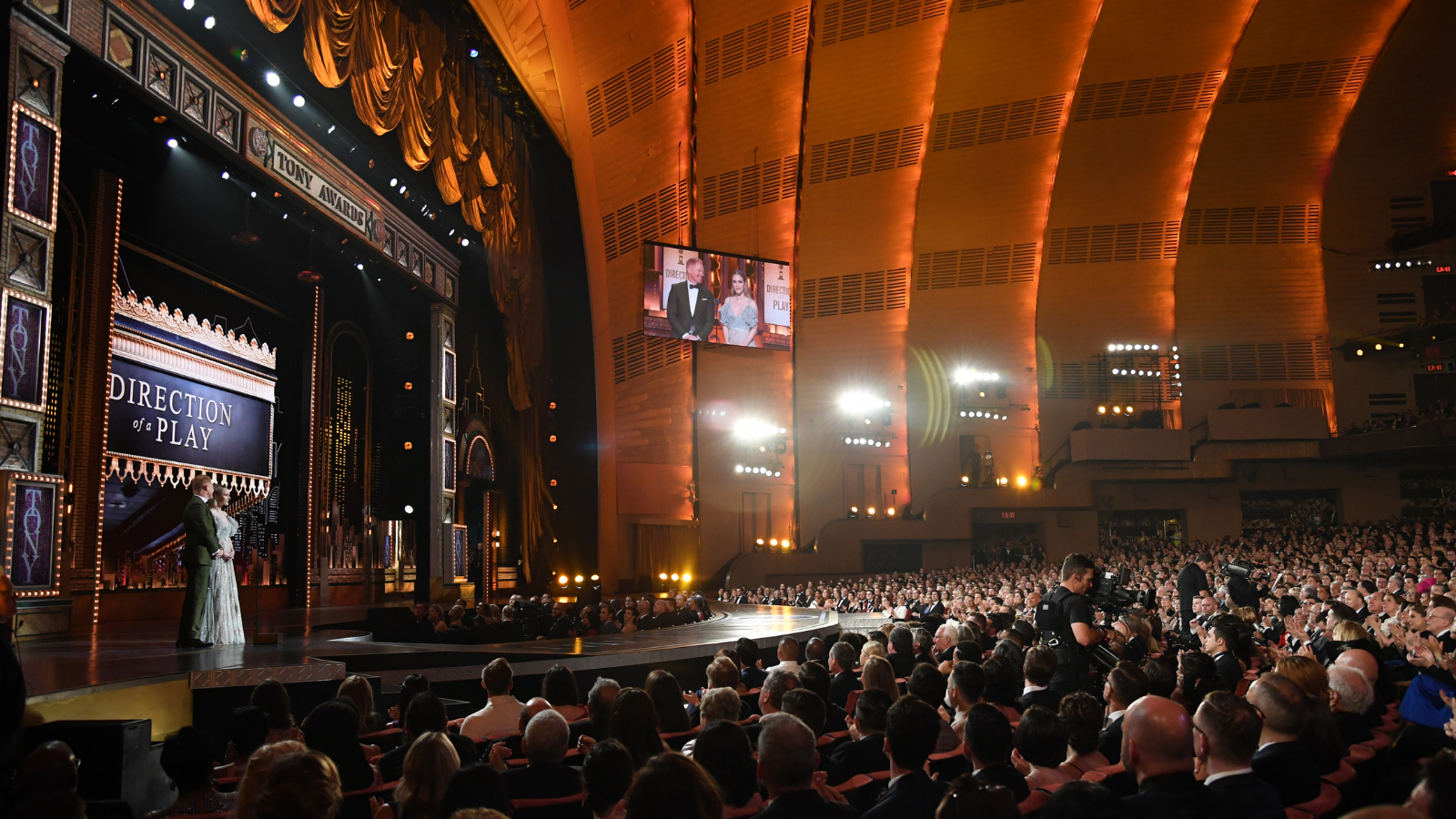 The Tony Awards will NOT be held at Radio City Music Hall This Year | Photo: Kevin Mazur/Getty

Tune-in tonight for live updates from the Theatrely staff tonight starting at 7pm ET as we watch and dish all about the 74th Annual Tony Awards...
‍

Meg: Not surprising - but very exciting!!

Meg: Celia deserves so much love tonight. They’re INCREDIBLE and I can’t wait to see where they go from here.

Michael: Bernadette is ageless. We all know it but it bears repeating.

Michael: Also big shoutout to tonight’s string section for nailing it even with just a small number of players‍

Meg: We are not updating this chat right now bc crying (well at least that’s why I’m not)

Michael: Wow. That was the heaviest in memoriam ever no question‍

Michael: Mr Groban is lovely but always sounds like OPERAAAAAHHHHH

Michael: I went to college with the conductor of BIV and it is a goddamn watershed moment seeing him up there

Michael: Just a bit too much Ben Platt for my taste these days

Meg: We need less Ben Platts at the table

Juan: The lack of Larry Owens in this broadcast…

Meg: I wish Ben Platt would take this time to finish the Politician instead because I've been waiting!!!!!!!!!

Juan: Ben Platt wants to move on from this Dear Evan Hansen cycle

Meg: Yeah we definitely weren’t going to get through this without LMM ending up on stage somehow

Michael: As dramatic as POSSIBLE with that music

Michael: I love Kenny Leon. Everything this man does

Meg: I mean…maybe a little diss to Ibsen

Michael: How did he get here this fast?!!!! Wooooowwww!!!

Michael: Honestly special tony award to whoever did the keyboard programming for this show

Juan: where is lil kim

Meg: I haven't seen MR yet but it looks like an absolute rave and I think that's what we all need right now

Michael: Why is John Legend snapping off the beat

Michael: Welcome back everyone to the winter garden featuring…The Music Man signage!!

Meg: The choreography in this number is gorgeous!!

Michael: Angie Schworer as the next Jenna please

Meg: Bernadette is SERVING AS ALWAYS!

Meg: Now we wait for Marymount Manhattan to have the nerve to boast about their alum winning after the experiences she's shared about MMC lmao

Meg: This is RIVETING

Michael: No but bebe neuwirth absolutely deserves a tony for being here

Michael: He is on his way to playing Father in Children of Eden in this suit

Meg: I am very relieved that I do not have to publish the article I wrote in the event he lost

Michael: We all wanted to see this article are u KIDDING

Michael: If I ever win a tony award my speech will be going very much like this

Meg: We knew Moulin Rouge was going to steal the show tonight and I am totally okay with that!! I do hope Tina gets some well-deserved acclaim in  some of the remaining categories.

Juan: Closing my eyes and pretending its for Here Lies Love !!

Michael: Me too. There’s a lot of good there as well

Michael: What is going on

Meg: I think word spread that the CBS show is starting late so maybe they were all told to kill as much time as possible lol

Meg: I just don't know what to say in response to this dude LOL

Juan: Robert O’Hara did not deserve this

Meg: Jennifer Nettles being cast in Waitress has exposed me to the theatre community as a closeted country music fan and I am slightly mad about it!!!!!! But also GOD I LOVE HER

Michael: Such a tough show to design with the orchestra not even close to the stage. Deserved

Michael: It was basically the disney electrical parade on stage. I’d riot if it didn’t win

Meg: That's a fair win!! It seems to me like Tina also has some cool costumes but MR's are so elaborate

Meg: Does Anyone Have Any Guesses...It Is Such a Mystery

Meg: HE BARELY EVEN REACTED

Michael: This could win best scenic design for my lifetime frankly

Michael: Did not expect we would get this super fast gloss over given the extra time

Michael: James & Jeremy, the actual stars of A Christmas Carol

Michael: ANDRE DESHIELDS ALWAYS the most debonair. He is my role model.

Meg: I cannot contain my excitement right now I love this woman oh my god

Juan: There are few actors whose careers as I’m excited for as Ali Stroker’s

Meg: Honestly I never realized how perfectly suited her voice is for A Chorus Line but WOW. This score is for her.

Michael: Also loving this new arrangement. Treating the original version with so much respect but with so much OOMPH. I need the trombone player for all my shows

Meg: Okay I can finally breathe it's commercial time

Michael: This sounds very odd with saxes and brass

Michael: These will be interesting speeches

Meg: ...that applause was light

Michael: Give me that uptempo Magic to Doooo

Meg: Honestly struggling to read a last name as simple as Smith is a huge dyslexic mood and I relate

Michael: We can only hope to be thriving like Lois Smith at age 90!! Incredible

Meg: I cannot unhear the Lord Farquaad in John's voice as he presents I'M SORRY

Michael: You could tell that cheer for Danny was bigger than any other when he was announcing his name. We already knew

Meg: When he said "after 7 nominations" I STOPPED BREATHING

Michael: I'm legit tearing up. And as always, he's so incredibly gracious.

Juan: This bodes well for the Amy Adams Supporting Oscar next year

Meg: When he mentions Rebecca I'm going to break

Meg: My first prediction of the night was right!

Michael: Felt this one coming. Absolutely overdue, he’s a treasure

Juan: I didn’t see Soldier’s Play but, after seeing David in Porgy & Bess, I’m FOR IT

Michael: Love that the orchestra is onstage!!!!

Michael: And that trumpet soloooo

Meg: A gentle speech from Audra McDonald is what we all needed at this Tony's specifically

Michael: Love to hear a shoutout for The Wiz! Hopefully one day it gets the revival it deserves

Meg: I'm really glad Audra is addressing the need for change...we'll see how much change is evident through where the voters put their votes tonight

Michael: Weird move to use the movie orchestration over the broadway one but okay

Juan: Heyoo — if they don’t bring in the Delta Nu girls to start us off, it’s a cursed night

Meg: How am I a Baltimore native and I didn't know this was happening?!?!

Michael: Need to know who orchestrated this preshow music