THIS BEAUTIFUL FUTURE Is Glossy But Bleak — Review 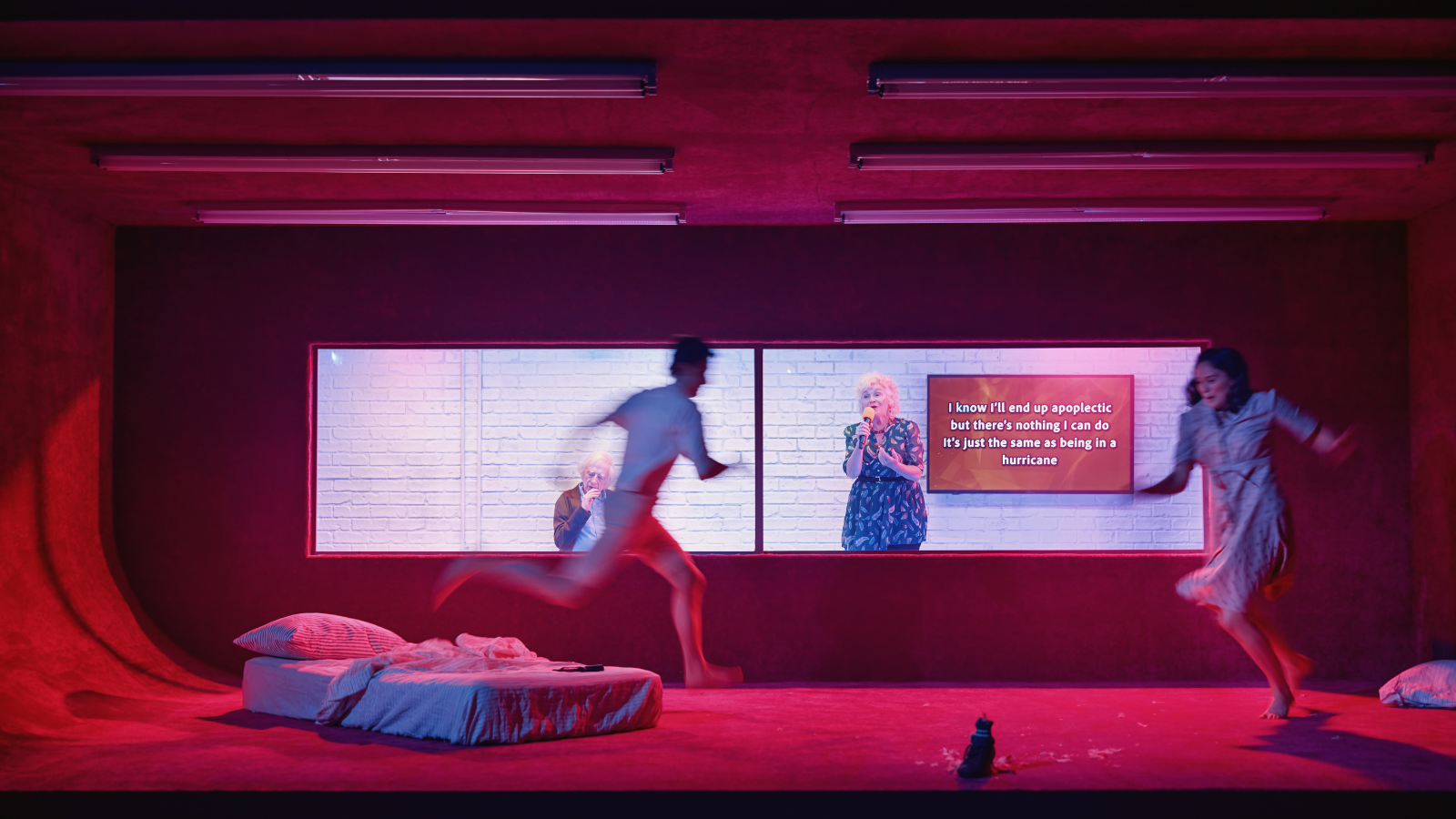 The company of This Beautiful Future | Photo: Emilio Madrid

You walk into Frank J. Oliva’s sleek, brutalist set, drenched in Stacey Derosier’s sumptuous bisexual lighting at the intimate Cherry Lane Theatre, and feel very much in 2022. The two-tone illumination has been everywhere lately, perhaps most conspicuously in Levinson’s smash-hit Euphoria. It’s reminiscent of a bunker, or perhaps an observation room, with its glass pane on the back wall allowing two actors to look on throughout.

Raised above the audience—some unlucky first row visitors had to stand up a few times—there’s a single mattress on the floor, a bowl in the corner and, you would believe, endless possibilities.

But just as Levinson’s series uses sexy neon to brighten up a storm of sensory overloading nonsense, so does director Jack Serio’s production of playwright Rita Kalnejais’ This Beautiful Future employ it to hide the fact she is saying very, very little.

Behind that glass pane are Angelina Fiordellisi and Austin Pendleton, two excellent stage veterans who here only get to telegraph their old age. Absent any chance for characterization, and with every minute of their life increasingly precious, it is absolutely shocking that they should choose to spend it here. They’re occasionally thrown a bone, picking up karaoke mics and singing 20th century-spanning songs that obliquely comment on the main story. It’s cute and almost arrives at saying something about the role pop music plays in our lives—how it can score our most precious and terrifying memories; significance through repetition.

What are they commenting on? And what is Kalnejais trying to say with this play? Maybe I’ll figure it out myself by the end of this review because, reader, I could not tell you.

Ahead of the pane, occasionally on that mattress, are Elodie (Francesca Carpanini), a sparky French teenager, and Otto (Uly Schlesinger), a young Nazi stationed in her town who is almost intelligent enough to recognize that his political affiliations are the only interesting thing about him. That goes for the play as well, which sees them coyly romance each other for what feels like eternity. He goes on about his appreciation for Hitler’s strongman persona, she pretends to not know that the literal Nazi in her town, and in her arms, has killed people—some of whom she even knows.

This goes on and on, occasionally punctuated by a song from the older actors or an idiotic chapter break projected above the stage (one is titled “the birds, the deer, the tanks, the tar, the spoon”). One particularly wince-inducing moment comes when the audience is invited to sing along to Adele’s “Someone Like You.”

There is the faint whisper of the possibility that what Kalnejais is getting at is that innocence can be corrupted, that youth is fragile and precious, and young love even more so. That a Nazi youth might just be a kid who wound up in a bad version of the Boy Scouts. All the inane bullshit Taika Waititi said in Jojo Rabbit to surprising critical acclaim, and that we’ve been regurgitating into each others’ mouths on a daily basis since 2016, like the live chicken which makes an 11 o’clock appearance here.

Absent any desire to sympathize with a Nazi—or a Nazi sympathizer—or any nuance that I might have latched onto, I gazed longingly at the set. The work is bad, borderline evil bad, but the lighting sure is pretty.

It was giving Sam Levinson.

This Beautiful Future is in performance through October 30, 2022 at the Cherry Lane Theatre on Commerce Street in New York City. For tickets and more information, visit here.