Time and Tick, Tick...Boom! as told through the Cinematography of Alice Brooks 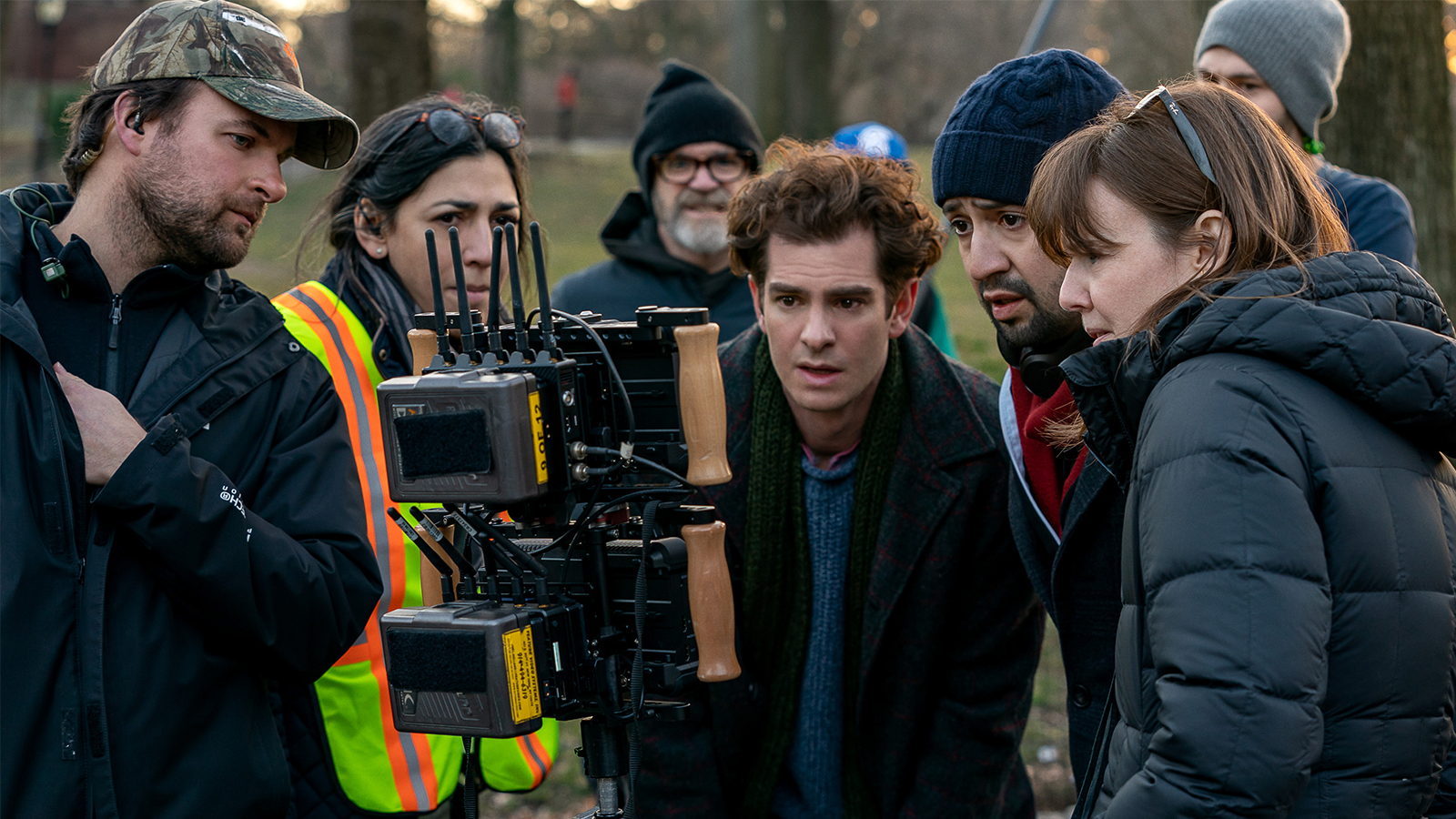 Netflix’s Tick, Tick...Boom! could not have arrived with more felicitous timing, offering both a time machine back to 1990’s New York City and a mirror image of the theatre community today as it once again faces the challenge of art during crisis, and cinematographer Alice Brooks contributed much to the rawness and reality of its storytelling.

Originally an off, off-Broadway autobiographical musical, Jonathan Larson’s Tick, Tick...Boom! musically narrates his life and experience creating and composing musical theatre in an industry that often prioritizes profitability over provocative new ideas. Since its premiere at Second Stage Theater, and following Larson’s unexpected death in 1996, it has served not only as a well-loved underground classic, but a self-written testimony of 90’s New York theatre history, and Larson’s large role in it.

As a film adaptation, Tick, Tick...Boom! faced the challenge of seamlessly translating itself from a sort-of grassroots, gritty one-man show, to a star-studded cinematic representation of what, at its heart, is simply a snippet of life: the life of Larson, the life of the “struggling artist,” the life of art during epidemic, and most of all, the life of the New York City theatre community in 1990.

A project like this could not have been more perfectly suited for cinematographer Alice Brooks, who is able to recall many of the sights, sounds, and stories that Larson himself described in his lyrics. Growing up as a child of the theatre community in New York City, Brooks' experience not only relates to the material of Tick,Tick...Boom!, but plays a role in it. “When I was sent the script, I thought, wow, these could be scenes from my childhood. My dad was a Broadway playwright, and my mom was a dancer. My parents could have been Jonathan and Susan. Just like Jonathan, we lived in a 300 square foot tenement apartment with a bathtub in the kitchen, and our small apartment was filled with my parents’ artist friends, who became our surrogate family members. Just like Jonathan, we lost some of those friends to AIDS,” she attests.

Working alongside director Lin-Manuel Miranda, their childhood memories craft a duet of lived experience that encompasses the spirit of Tick, Tick...Boom!’s setting. “I was 10 in 1990, the same age as Lin,” she notes. “The movie starts that year, and that’s also the year I left New York and moved to Los Angeles. This time in New York is forever stamped in my mind as my New York - this vision of New York through the mind of a 10-year-old, where color and light and emotions are heightened. That’s very much how Jonathan is. He’s this childlike character at 39 years old, wanting to be Peter Pan, not wanting to grow up.”

The loss of youth and time serves as a central theme to Tick, Tick...Boom!, both foreshadowing Larson’s premature death, and reflecting on the loss that surrounded him during the AIDS crisis. A ticking time bomb, Larson’s lyrics repeatedly describe feeling as though there is not enough time in the world to tell his story - especially as he faces barriers finding an audience to listen to it. Now, his story is told through the lens of not only Brooks’ expertise and experience, but the shared strife of the entire cast, crew, creative team, and community, as they launched filming at the direct onset of the COVID-19 pandemic, which closed most theatres nationwide for nearly two years. “We prepped the movie for about three months starting at the end of 2019, and began shooting at the beginning of March 2020. We shot for eight days, then shut down for six months,” Brooks recalls. “We didn’t know if we were ever going to go back again.”

For some time, the team withdrew from one another into both literal and psychological isolation, reeling from the shock and sorrow that had befallen. Eventually, they collectively prevailed by finding strength in each other, just as Larson and many other artists of the time did during the AIDS crisis. “Slowly, we started doing something we called ‘Tick Tick Zooms,’ and 500 people were invited, the entire cast and crew,” Brooks shares. “At first, they were like therapy sessions: how are you coping? Where are you getting your toilet paper?” she recalls bittersweetly. Eventually, “Tick Tick Zooms” evolved into an escape from reality, rather than a reflection on it, where the cast, crew, and creative team played trivia and shared as much joy as anyone was capable of at the time.

Finally, in June 2020, the team decided it was time to pave a path forward, despite countless roadblocks in the way. They spent an additional three months prepping once again, and resumed filming in autumn of 2020. While some opportunities they’d secured prior to the pandemic were lost, many new ones were found. New York Theatre Workshop, where Jonathan Larson originally performed Tick, Tick...Boom! for one-night only, was initially slated to be a constructed replica set, but after COVID-19 rendered the actual, real-life space vacant, the film was able to be shot there. “We could now not only film there, but inject money into a community, the theatre community, which was hurting so badly. Every theatre on that surrounding street was used for something, whether it was holding wardrobe, or makeup, or catering,” Brooks remarks. Being able to give back to the very community that this film was, as Brooks describes, a “love letter” to, felt almost spiritual, Brooks describes: “We felt like Jonathan was there with us making this movie, whispering in our ear. It was like being on sacred ground, in that theatre.”

As the COVID-19 pandemic and the sociological state of America in 2020 evolved throughout the filming process, the story evolved with it, exchanging pieces of both the past and the future, of tragedy and triumph within the theatre world. A film that was originally a glimpse into the past had now become a balancing act of reflection and reconciliation, and it told a story not only of yesterday, but for today. “We all started to feel a connection to Jonathan’s lyrics that we didn’t feel in the same way before,” Brooks says. “Why does it take catastrophe to start a revolution?” she asks. She recounts the numerous social movements, such as Black Lives Matter, that were able to take place during quarantine that sparked widespread conversation on conversations that have already been occurring for decades, without much change: “Why are these questions still happening, 30 years later?” As Jonathan’s character in Tick, Tick...Boom! asks the unanswerable questions of time, loss, and tragedy, the Tick, Tick...Boom! team wonders the same. “Jonathan was watching all of his friends die of AIDS, and now we’re losing so many people due to COVID-19, and no one really knows why some people die and some people don’t. It really hit me on a profoundly different level,” she says.

Although there were times that Brooks and the team experienced the same fears that Larson’s character had in Tick, Tick...Boom! of losing the ability to create to timing, and losing loved ones to illness, their fears propelled them forward to the finish line. “It got into our headspaces, living with the fear that Jonathan and his friends had to live with. We had to trust each other to take care of each other in the best way possible, and we did.”

Now, at the tail end of the second year of the COVID-19 pandemic and the full shutdown of theatre in New York City, Tick, Tick...Boom! is ushering us into a new era. As Brooks describes: “This film was always a love letter to the theatre community, and to Jonathan Larson’s dream.” As Tick, Tick...Boom! encourages strength in community, challenges the status quo of theatrical production, and copes with crisis as it relates to the creation of art, it could not have arrived at a more perfect time. And this love letter, this message, this reminder of the future Larson envisioned for what the theatre industry could be today, could not have been delivered more authentically and earnestly than through the lens of Brooks.